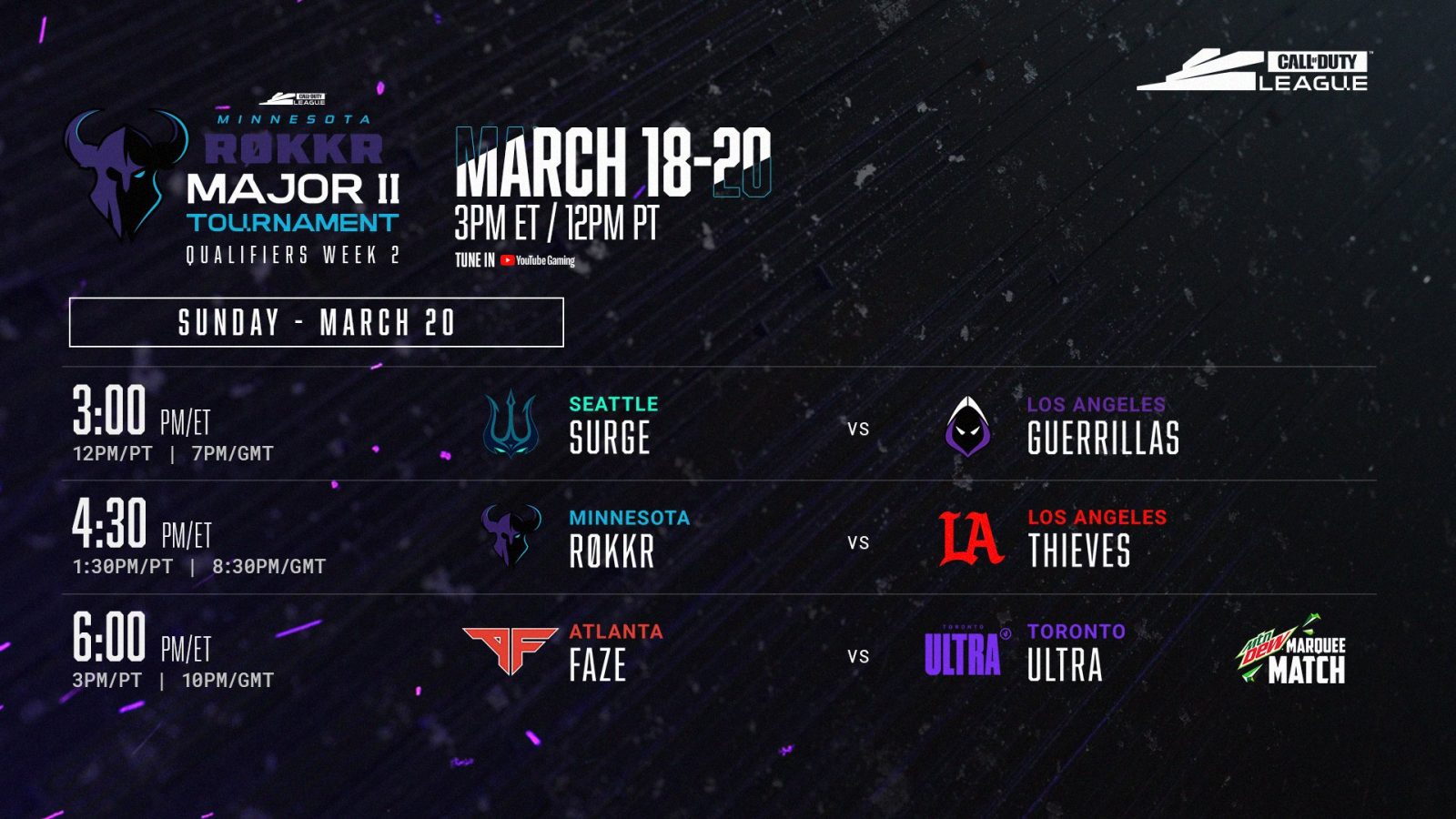 It’s the last day of the second week, and the standings are starting to take shape. Not many teams have escaped this stage without a loss, besides the gang green of Optic Texas and Boston Breach. The stage is set for some intrigue as we head into week three, but there are still matches to be played.

Why Seattle Surge will win: Sib continues to heat up going into Major II. He may have cooled down a bit going into the later rounds, but Sib will determine how high this roster goes. His talent level is immense, and as we’ve said before there’s no position more important than the flex right now. If he can keep dropping +12 kills in a match, they can win this one.

Why Los Angeles Guerrillas will win: SlasheR stays hungry for the gunny. While they admittedly obliterated Paris Legion as a team, SlasheR was on one, with +19 kills and a 1.45 KD. If Los Angeles can veto maps like Bocage and Tuscan and set SlasheR up with some longer range maps, he’ll fry.

X-Factor: Search and Destroy. LAG is 4-9 and Seattle is 10-8, including the kickoff. There isn’t a particular map the Guerrillas are going to play best, so maybe hitting Desert Siege where neither are great is a good call.

The enforcers go head to head. #LightsOut vs #DrownThemOut

Why Minnesota Rokkr will win: Honestly, I don’t think they can. But if they do, it’ll be Standy having the game of his life. He’s been good in S&D, now it’s time for him to take over the Hardpoint and Controls.

Why Los Angeles Thieves will win: They win the Control. This team has been abysmal in Search and Destroy, with a 7-12 record including the Kickoff Classic. It may take winning both Hardpoints and the Control to take this one 3-1, because I’m not sure I trust them if it heads to a Game 5.

X-Factor: The coinflip. Not that Minnesota has been any better, but forcing LAT to play the Tuscan Control at least puts you on equal footing. If it’s on Gavutu Control, just chalk that one up.

Since it’s #MarchMadness szn, we figured we’d let a couple shooters settle it on the court. 🧱 pic.twitter.com/aVOQ3HySy3

Why Atlanta Faze will win: Hardpoint play. Faze is one of the toughest teams to get off the hill, especially when they’re playing Bocage. Toronto could veto this, and I’d assume Faze will probably veto Berlin, which leaves us playing Gavutu and Tuscan. Both teams are somewhat middling on those maps, but I trust Faze on them more than Toronto.

Why Toronto Ultra will win: Toronto starts slaying again. No one can really tell what’s up with Toronto this year, especially after they opened the year so hot in the Kickoff Classic. Maybe teams just weren’t showing anything off during that tournament, but the Ultra have been slow to get a bunch of kills on the board. KD isn’t everything of course, but Toronto isn’t in the top KD for anything, and even worse, they’re in the bottom of several categories. They’ve got to fix that here.

X-Factor: I hate saying Control constantly, but it really comes down to that for these teams. I fully think we’ll be tied 1-1 going into the Control, the Hardpoint to Faze and the S&D to Ultra. Whoever emerges 2-1 has a major opportunity to close it out, either Faze in the next HP or Ultra having a buffer if they have to take it to the S&D.

We won the break on Gavutu HP and then Chris is in ring stairs and I tell him I’m going to shoot the barrels and to stay there. I shoot them and it still blows him up on the stairs😂