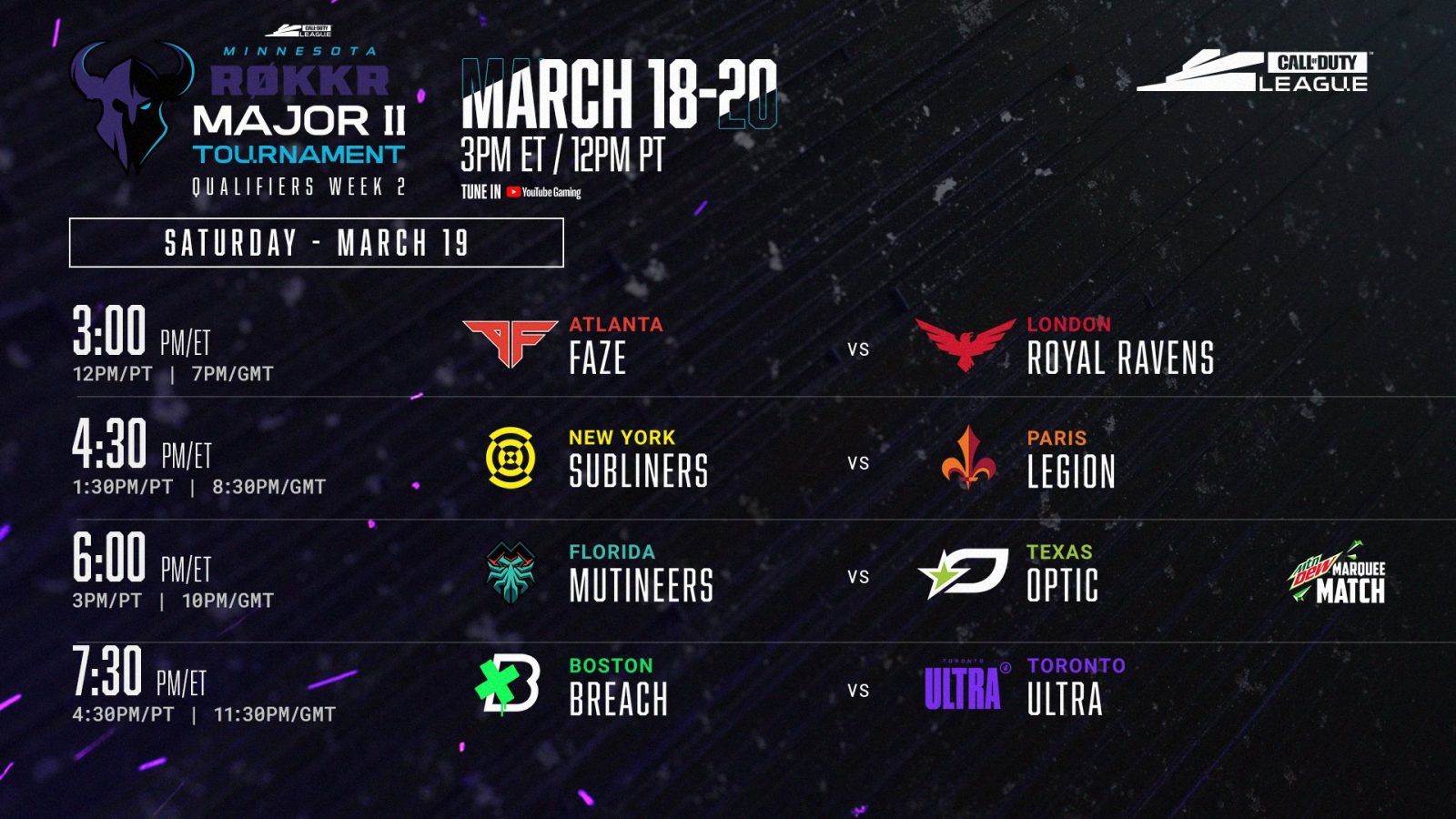 We’ve got plenty to talk about this weekend, with plenty of high-skill clashes across the board in the Call Of Duty League. Only one thing has changed, our preview format! We’re going to do something a little different so it’s not exactly the same as our takeaways, hopefully you like the direction we take it!

Why Atlanta Faze will win: Because they’re angry. This Faze team isn’t playing to their potential at all right now. Maybe it’s this game not working for them, maybe they are just tired after a long Championship campaign last year, who knows. But you can’t think they’re happy with people dragging them on social media over how human they’ve looked. If they show up angry, prepared, and ready to fly, they’ll win this one.

Why London Royal Ravens will win: The most complete team and individual play we’ve seen in the Major II qualifiers. No one has looked as clean as London (although the Paris game was a scare ), not even Optic Texas. Even with a substitute they’ve been incredible, and with Afro and Nastie piecing and Zero holding everything together on the back end, they’re a serious threat this time around. Sure they’ve got to prove it on LAN, but looking like this they can.

Why New York Subliners will win: Because this team has to. They are obviously in panic mode. Nothing is working, and I don’t know that they have any idea as to why. At least they’re trying to address things, adding PaulEhx in place of Clayster. What’s for certain this team has to start winning or things will go from worse to disastrous. That is, if it hasn’t already.

Why Paris Legion will win: They finally have a group of four that have potential, maybe sans John. Temp looks great, GRVTY seems like a good fit at main AR, and Jimbo’s flaws can be somewhat blamed on his connection. This team is the only team not in a facility together, so just being competitive is a big deal. Versus a team falling off a cliff in New York, it’ll be surprising if they can’t win.

X-Factor: Hardpoint. New York may be getting a lot of crap over their 0-13 record, but it’s not like Paris has been much better, going 4-14 including the Kickoff Classic. Whoever wins a Hardpoint probably wins the match. Someone has to… I think.

appreciate the respect and consideration announcing something before its announced 👍

Why Florida Mutineers will win: Their momentum has never been higher. Florida usually wins big then gets blasted by a lesser team, but that didn’t happen versus New York. The Mutineers seem to be gelling, with great performances by newcomers Davpadie and Vivid anchored by the stellar play of Skyz and Owakening.

Why Optic Texas will win: The team keeps operating together. Nothing has been more prevalent than Optic finally all being on the same page, and it’s producing results. I don’t see four individuals anymore when watching them play; instead I’m seeing a unit working together and it’s scary how much more impressive their performances are versus going rogue on the map.

X-Factor: Owakening. I usually make the joke of, where Skyz goes, so do the Mutineers. It’s certainly true, but if Owakening keeps slaying the way he has been, Optic might panic and make a few mistakes we haven’t seen from them recently.

We're thinking of calling this new series 'The Plank' pic.twitter.com/KNTqJ3I8QJ

Why Boston Breach will win: They can win Hardpoints and match Ultra in S&D. It might take Capsidal going off again, but they can certainly go head to head with Ultra on the Hardpoints. On the Search and Destroy side, it might be tough, but put the right maps in and suddenly we’ve got a close match on our hands.

Why Toronto Ultra will win: Control. Boston is awful at it, and if we take the close matchup on the other two modes and split it, Toronto could pull this one off. The real question, is it a 3-0 or a 3-2? I just don’t see a 3-1.

X-Factor: Cammy. He’s not been great so far this year, with only a .97 KD. That’s not everything, but with how important the flex position has been so far this year, he needs to step it up for Toronto to be their best. Remember, he was in the running for MVP last year, and his play is a big part of why they turned it around after Stage 1.