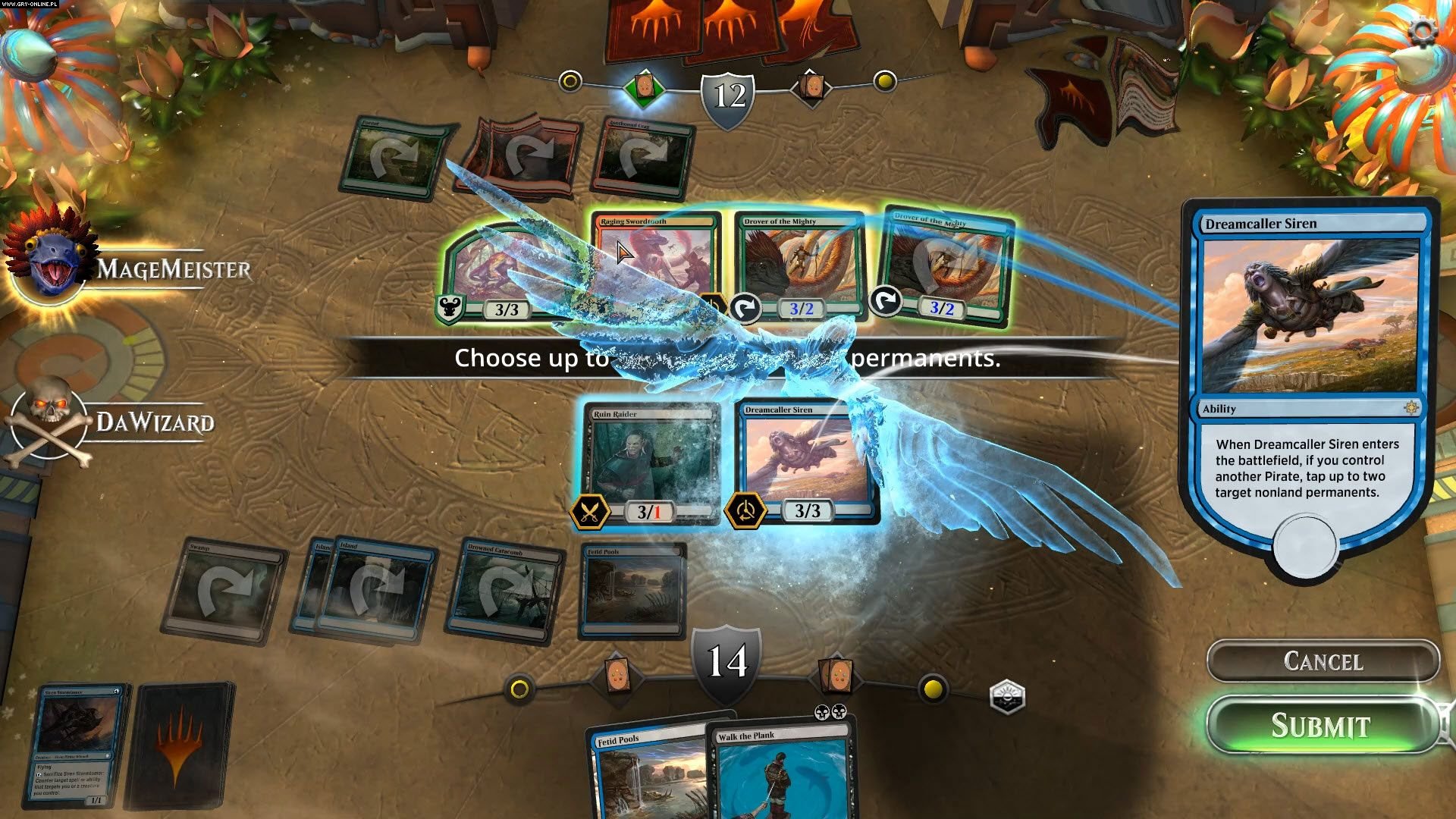 For years, the games industry has attempted to harness the magic of Magic: The Gathering in a digital format. In 2015, Wizards of the Coast published Magic Duels, which aimed to draw newcomers into the world of Magic. By simplifying the rules and limiting the library of cards available to the player. While Duels’ free-to-play model and availability across many platforms served the game well in terms of capturing an audience, it was an incomplete representation of a game that’s at its best when presented in its clunky entirety. With Magic: The Gathering Arena, Wizards of the Coast has taken a more ambitious approach. Rather than attempting to make a video game based on Magic: The Gathering, Arena aims to recreate the card game experience completely, while retaining the free-to-play model that was championed by Duels. Based on my time with the game, there appears to be a lot for fans to be excited about.

Magic Duels was Wizard of the Coast’s first run at a free-to-play model, and a departure from the success of Magic: The Gathering Online, which has seen huge success among hardcore players. With Magic: The Gathering Arena, Wizards of the Coast is taking development in-house and attempting to harness the best of both worlds by appealing to hardcore players and newcomers alike while providing a payment model that is accomodating to everybody. Rather than releasing a new game every few years, Arena will utilize the games-as-a-service model with regular updates and new content planned for the game for years to come. The game is planned to launch with a library of all the cards in the current “Standard” tournament format — basically meaning the last several card sets released — and will update its library with new sets as they come out. The free-to-play model will allow players to grind for their ideal decks or make in-game purchases to get better cards faster. The game hosts two currencies: “Gold,” which is earned, and “Gems,” which are purchased or granted to players on rare occasions.

The decision to bring development in-house will allow for prompter deployment of new content, with new sets being added to the game on the same day that they become available in the physical card game worldwide. At the time of this writing, Arena is only available on PC through a closed beta, but the game was created using the Unity engine, and the developers plan to deploy on additional platforms in the future with hopes to allow for crossplay using a single Wizards account. If this were implemented, it would mean that players could bring their decks and accomplishments with them wherever they decide to play — something that no Magic video game has managed to pull off thus far.

I sat down with the head of Magic Digital Studio, Jeffrey Steefel, who explained the delicate balance between enforcing the complex rules of Magic, and providing an experience that is still entertaining and reasonably paced. In their first draft, Steefel’s team developed a version of the game which implemented every known rule of Magic: The Gathering, essentially stopping the game dead in its tracks to give players the opportunity to act at every phase of a turn. As Steefel put it, the team realized that while they had created the most faithful digital version of the card game, it was also an incredibly boring experience. From there they worked to streamline the game and get rid of unnecessary interruptions to the battle, until they arrived at something that more closely resembled the Magic experience, but also kept gameplay interesting. In other words, they wanted to create a game that felt like Magic was actually played in practice, rather than how the rules work in theory. It’s a difficult thing to balance, because some players relish in the ability to make decisions that seem to go against their own best interest in order to deceive their opponent. For this reason, Magic Digital Studio has preserved a version of the game which preserves most of the rules in their entirety, for the hardcore player who prefers a pure experience.

Of course, the question of when to give players a chance to act during their turns wasn’t the only challenge confronting Arena’s developers. As Steefel described it, if Magic is a chess game, then it has thousands of individual pieces, each with their own special abilities--and new ones are being introduced all the time. So in order to make a game that knew how to handle every card, the developers couldn’t merely teach their software “the rules.” They had to teach it to read. Steefel told me that the Unity engine allowed them to create and implement software that essentially reads the cards much like a player would, applying the abilities of each card on a case-by-case basis based on what the card says. This “reading” software is what will allow Arena to feature every card in every set that comes out after the game’s initial release, without having to exclude cards or drastically retool the game.

The devs also told me about a couple of the helpful features Arena uses to make card collecting easier and more fun in a free-to-play game that relies heavily on “booster packs,” which contain an assortment of randomized cards. First, and most significantly, Arena introduces the “Wildcard” system. Wildcards show up in booster packs (and other rewards) and come in the same four rarities that all other Magic cards do: common, uncommon, rare, and mythic rare. Once earned, a Wildcard can be exchanged for a copy of any card of equivalent rarity. Second, Arena does away with the possibility of collecting more copies of a card than you need. Any time a player would receive a copy of a card beyond his or her fourth copy (the maximum number of copies that can be placed into a deck) that player will instead be given progress to open a “Vault.” Once opened, the Vault will give the player — you guessed it — more Wildcards. In other words, for arguably the first time in Magic’s long history, players will have the chance to choose the exact card they want as a result of opening a booster pack--and without ever having to spend a dime.

The gameplay, once I got a chance to try it out for myself, reminded me a fair amount of Duels, but with significant improvements. The battlefields are designed to look like jungles or other natural environments, complete with little animations like beetles crawling across the edge of the screen. The sound design appears to consist largely of background noises--in the jungle battlefield I played on, there were sounds of water rushing and plants rustling. Cards often perform animations when doing their thing. For example, they smack the player’s icon or the other cards in the face when dealing damage. But Duels players and wary physical-game players alike will probably be pleased to note that important features such as ordering the creature cards blocking your attacking creatures and then assigning damage to each blocker are easy to use and function as they should. Overall, Arena feels like it lives up to the promise of a smoothly flowing game that also gives players enough control over their cards to make the key strategic decisions they’ll need.

At the time of this writing, Magic: The Gathering Arena has no release date, and according to the devs, they don’t plan on assigning one until they feel the game is ready for public consumption. For now, they’re improving the game with the help of a passionate community of ultra-nerds, with an open beta planned for the near future. While the game is still in its early stages of development, it’s already earned a lot of good faith from their community by adopting a slower, more thorough development process. And owing to a free-to-play, games-as-a-service model, newcomers will have an opportunity to dive into a more complete vision of Magic: The Gathering than has been previously available to those who don’t want to spend $34 on Karn, Scion of Urza.

We plan on following the development of Magic: The Gathering Arena closely, so keep an eye open for additional coverage at Gaming Trend.