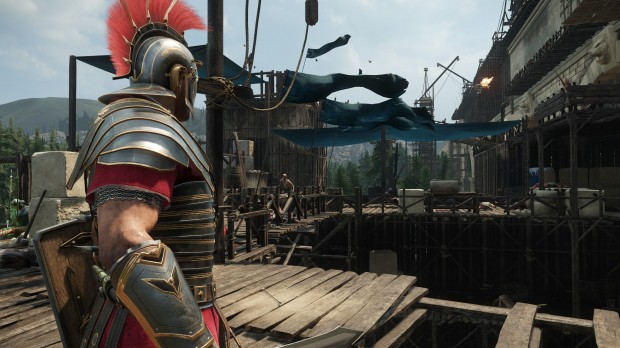 When in Rome, expect brutality. Originally announced as an Xbox One launch exclusive, Ryse: Son of Rome will finally be coming to PC players on October 10. Crytek is handling the PC port, and it looks fantastic.

Ryse is certainly a game that benefits from the extensive graphics options on PC. Features like supersampling, texture resolution settings, and anti-aliasing options make this game look even more beautiful than it already did on Microsoft’s flagship console. The story of Ryse takes you from the forests of Europe to the city of Rome itself, and it’s difficult to stop yourself from sightseeing in the middle of a tense battle. There is even an option for the high-end gamers to run at 4k resolution, which requires a hefty PC but outputs some incredible visuals.

The scenery is beautiful, even when it’s being torn asunder.

The combat is as tight and responsive as you would want from an action game. Executions are swift and brutal, and different enemy types keep adding variety and tactics to the slaughter. Button mashers will be punished on the higher difficulties, where a single falter means a barbaric demise. Keyboard controls can be a little odd, requiring your hand to uncomfortably stretch across the keys in a split second, so it would be worth your time to pick up a gamepad. Like most brawlers, Ryse feels much more at home on a controller.

It wouldn’t be a game about Roman legionnaires if you couldn’t command a phalanx of well-trained soldiers, and Ryse brings that in spades. The moments where you take command of your troops and march against the enemy are impressive, and taking command of ballistae or chucking javelins is a nice break from the sword n’ shield smack-down.  This game is a gruesome experience (in a good way), and those looking for a new, brutal action game would be hard-pressed to pass up on Ryse.

The battles range in scale, from deadly one-on-one combat to legions of men crashing into each other.

Ryse: Son of Rome will release October 10 on Steam for PC. The game will include all four DLC packs that have been previously released. Below are the minimum and recommended specs.