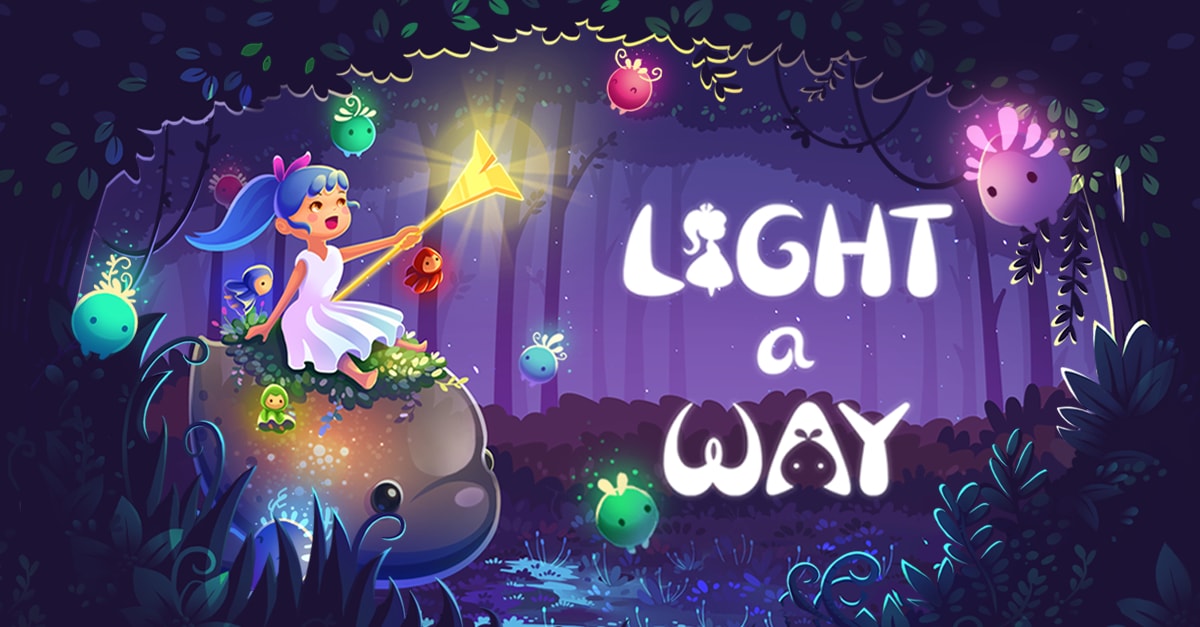 I’ve honestly poured more time into mobile games than I’d like to admit, from my dedication to Pokemon Go, to my Dark Side-heavy team on Star Wars Galaxy of Heroes, to my months-long addiction to Zen Koi. Mobile games provide me with an often-needed brain break and an overly satisfying sense of accomplishment during the day. So when I heard about a mobile game featuring a fairytale setting styled after Ori and the Blind Forest, I knew I was about to lose countless more hours of my life.

Light a Way is a beautiful, incremental, whimsy game by Appxplore where, in the middle of an eternally dark forest, a little girl surrounds herself with glowing creatures in order to return light to the world. It’s a simple side scroller, where the girl marches forever onward, using the power of her wand, fairies, a glowing whale, and a whole host of little magical Lumis to vanquish Erebus, creatures of darkness which hold Fey captive inside their plant-like bodies. There are ten Erebus per level, nine minions and a more challenging boss, with every fifth boss being significantly more difficult. You vanquish Erebus by infusing them with light, which you can do both actively and passively.

Your friendly neighborhood light whale companion, officially known as a Lumi Lantern, produces a steady stream of cute, colorful Lumis, who drift whimsically towards the Erebus, exploding and dousing the evil pants in light upon contact. During non-boss battles, I generally just sit back and leave the fighting to the Lumis while drinking in the game’s aesthetic and soundtrack, since Erebus don’t actually do any damage to my character. Boss battles, on the other hand come with a timer, and you’ll need to quickly vanquish the monster or risk being banished to Limbo. Limbo isn’t anything terrible, you’re simply transported to a slightly different kind of dark forest where you’ll continue to vanquish and endless stream of Erebus until you’ve gather enough stardust to upgrade your character, spells, and Lumis before trying to take down the boss again. You can help your Lumis out by blasting your enemies with the light from your wand by tapping the screen as quickly as you’re able. It’s a simple mechanic, but it’s one that feels somewhat at odds with the feel of the game.

The zen, calm vibe inspired by the soothing soundtrack, the glowing, magical creatures, and generally relaxing environment is all undone by the need to frantically tap at the screen. It simply felt out of place. Some kind of sliding or spinning motion would have provided an active element without undoing the game’s vibe. Sliding my finger to connect two same-colored Lumis, or spinning a magical energy to help build up power could have provided a hands-on element while still keeping with the overall feel.

That said, tap tap tapping can feel incredibly rewarding, especially early on when you’re blasting through level upon level, powering up your character and Lumis as quickly as you can tap, and racking up stardust. Stardust is the currency of the dark forest, and is conveniently dropped by Erebus whenever they are defeated. Stardust is used to level your character, upgrade spells, and to both level up and unlock new Lumis, so you’re going to need a lot of it. Being free to play, Light a Way provides plenty of stardust to help you zip through the early levels, but leaves you yearning for a quick fix in later ones.

Light a Way offers plenty to do for free, and generally doesn’t clutter up the atmosphere with advertisements. Stardust builds up passively whenever the app is closed, and watching a video allows you to double your afk stardust to help boost your levels. Daily bonuses are unlocked by destroying a certain number of Erubs, and include diamonds (which can be purchased for real money), gems used to upgrade wands, and chests containing random assortments of wands and gems. A free chest, with gems and the occasional wand can be opened once every few hours, and Phoenixes, another beautifully illustrated creature within the game, will bless the player with a random boost if tapped while it flaps its way casually across the screen. The Phoenix is also where the one bit of intrusive advertising appears: Sometimes, instead of endowing a blessing when tapped, the phoenix will spawn a popup window, urging you to watch a video in order to unlock a blessing. It’s a minor thing, and it doesn’t happen every time, but it’s more than enough to break the game’s spell.

Some things cannot be bought with diamonds and require an investment of real money, such as upgrading your Lumi Lantern. These upgrades are permanent, so you won’t have to keep feeding the machine, and do allow you to advance through levels more quickly. There are also cosmetic changes you can make to your character, I managed to unlock a Ruby Dress, as well as several wands, which provide both cosmetic changes and damage upgrades, without spending any real money.

As I neared the 90th game level, my character nearing level 600, everything slowed down significantly. Bosses took countless taps to defeat, and spells took so long to cool down that I resorted to fighting a boss and closing the app for a few hours, opting to wait wait for my stardust to passively accumulate and my spells to cool down, rather than try and tap my way through limbo. This really does seem to be the optimal strategy for higher levels, unless you have access to diamonds, which can be used to unlock perks, which are basically just powerful spells that you pay to use. When the game got slow, I found myself exchanging 100 diamonds for a Stardust Rain, a perk which drops 4.2 billion stardust into your pocket, allowing for quick upgrades to help ease the pain of those long, slow levels. Fortunately, the game has a hard reset at level 650. Once your character reaches that level, she’s sent to another world, identical to the one you just left, where she start over at level one, but retains all of her staves and perks. This once again returns you to the the highly satisfying early levels, which you’re able to whiz through them even more quickly thanks to the retained boosts.

Light a Way is a simple game focused around tapping and upgrading, which has been made more complex and interesting thanks to a whole host of creatures, spells, runes, upgrades, customizations, and accessories. The game provides a simple and highly satisfying tap-to-attack system with quick level progression, even if the soothing atmosphere of the game seems somewhat at odds with the need to frantically tap. I’ve found myself returning to the preview build of this magical, dark world often, even if I haven’t yet shelled out the cash to upgrade my Lumi Lantern. Light a Way is free to play and will be available for both iOS and Android. The game releases February the 8th, and is currently open for pre-registration at the Appxplore website.