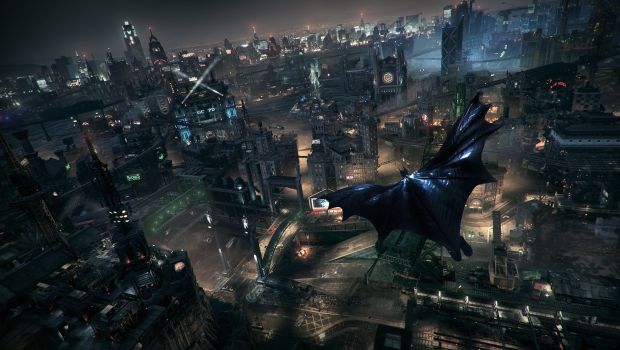 Anyone who’s played the Arkham games is intimately familiar with their formula for bringing the Batman experience to life. Whether it’s snatching enemies into the shadows, incapacitating them with fantastic gadgetry, or simply diving in and brutalizing a group of thugs with the caped crusader’s martial prowess, Rocksteady has fined tuned their concept of how the iconic hero governs Gotham’s streets to near perfection. With Batman: Arkham Knight being the end of the series (or at least Rocksteady’s involvement.) there has been a lot of curiosity about whether or not this final chapter will simply be a conclusion or a magnum opus.

Well, if what I experienced at E3 was anything near what the final product will be… it’s time to iron the wrinkles out of the cape and cowl your girlfriend makes you keep in the closet. The Batman is back… and yes, it’s even better.

I have to admit, after watching the graphical prowess and precision control displayed by Rocksteady’s video demonstration, I was skeptical how actually taking charge of the Batman would feel when I got my chance with the game. After the uneven reception of last year’s Arkham Origins (a title alternatively helmed by developer Warner Bros Games Montreal), and especially after the napalm-hot popularity of Arkham Asylum and Arkham City, did the franchise have anything left or would this just be a fresh dose of old news? After all, there is a discernible line between making something great even better (Saints Row) , and circling the gutter of stagnancy. (Spider-Man).

This was a question answered ten minutes into the game, when I found myself laughing into the mic of my headset and muttering: “Idiot. Why were you even worried?”

Every frame of Arkham Knight is so photographically pristine that I often found it outright distracting. The glow of the city’s lights, the subtlety of the shadows melding across the asphalt streets and bricks of the building’s walls, it was like stepping inside an oil painting. All the while, the whisper-soft hum of the  PS4 I was playing the title on reassured me what I was looking at was a real deal Gen 8 product and not some E3 trickery. When the Rocksteady rep brought my attention back to playing the game instead of just admiring it, he directed me to check out Batman’s cool new abilities as well as one of Arkham Knight’s crowning joys.

Diving from a ledge and toward a rooftop ventilation grate, when Batman comes within range he swings his feet forward and boots his way through the obstacle, seamlessly transitioning to the interior environment without even the passing wink of a loading screen. Watching Batman slide through the narrow air passage with his hands and feet braced against the walls takes less than a couple of seconds before I find the hero hidden beneath a clueless guard. A quick pan of the camera reveals the armed criminal has two partners, all watching the distant perimeter and tragically oblivious about what’s to come. This is when another of Batman’s new tricks makes it appearance.

Bursting up from the air duct and striking the first of my targets catches them unawares and slows time, giving me plenty of opportunity to locate and dive toward my second and third opponents the instant Batman’s armored fist connects. In one fluid combination the entire guard station has been reduced to a room of groaning semi-conscious lumps on the ground. This is called the Fear attack, and the origins of its namesake are obvious.

This ability to ambush decimate small clusters of enemies isn’t alone on the roster of the Dark Knight’s new tricks. Environmental takedowns make everything around you into a potential weapon, chaining grapple-gun shots allows quick assent to building ledges and rafters, and gadget/melee combinations create a multitude of combat options even when your back is against the wall. And then there’s the Batmobile…

The incorporation of the iconic vehicle has been at the forefront of Batman: Arkham Knight’s advertising, but after getting behind the wheel of the transformable powerhouse, you’ll surely get behind the hype. Functioning more like a partner than a tool, the Batmobile does a lot more than just grant you the power to quickly traverse the map. The Batmobile can fire a grappling winch of its own to grab and move objects into different positions, or pull walls out of your way (and by “out of your way”, I mean apart.). The rocket assisted pursuit mode and maneuverable battle mode are both as useful as switching between them is important. When positioned correctly via remote control, the Batmobile’s powerful non-lethal riot cannon can even assist Batman in melee combinations. I’ve seen a lot of great things in my years as a gamer, but few as sweet as watching a goon take a kick to the stomach and then be laid-out for good by a rubberized cannon round fired from my car through a window. This may be the first time the Gotham hero’s dark horse has been more than a set-piece in gaming history, and the Spy-Hunter treatment it’s received is nearly worth a game of its own… or at least some inspired DLC.

Almost every moment of my time with Batman: Arkham Knight was spent discovering and enjoying something new, and even though I was happy to wait this long for the title to arrive, after getting a taste, I find myself craving another hit. Get your pre-orders ready my gaming-vigilante friends, every moment you miss with this one is going to be time you regret.