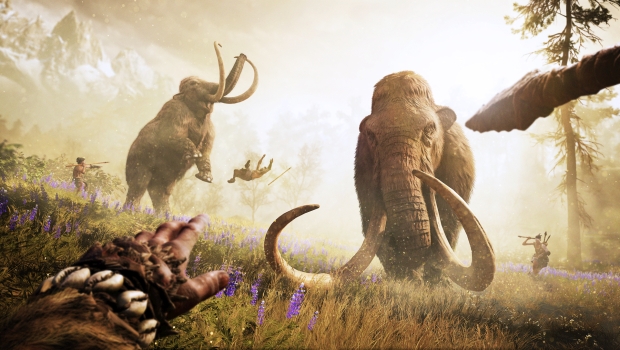 When Far Cry took a detour into the realm of ‘80s neo-futuristic action with Blood Dragon, it was a side project, based off the popularity of Far Cry 3 and the creativity of the team behind it. With Primal, though, Ubisoft Montreal isn’t building a quick, short experiment in the bizarre. Far Cry Primal is every bit its own, using the Far Cry structure to create a compelling Stone Age experience.

One of the greatest challenges in developing a prehistoric world for Primal is the world itself. Striking a balance between realism and the fantastic is difficult when you don’t have much to work on for source material, but Ubisoft Montreal has gone to great lengths to keep the base gameplay as gritty and brutal as possible, much like combat would have been before smithing and masonry.

Through the help of anthropological research and many consultants, Primal feels very much like a savage frontier rather than a re-skinned map. The woods teem with wildlife, both docile and aggressive, ready to pounce on you when least aware. The nights are pitch black, with fire as your only refuge against the many glowing eyes stalking you in the darkness. Other tribes roam the land, ready to kill you and your Wenja companions on-sight to increase their dominion over the land of Oros.

These tribes range from the barbaric Udam to the fire-worshipping Izila, to your own Wenja, who commune with nature and are the most spiritual of the tribes of Oros. Your task, as the hunter Takkar, is to gather your scattered people and rebuild the Wenja nation.

As you gather them together, though, you’ll find they’re each marked by life in Oros in their own way: some are missing organs or limbs, some are scarred and battered, others cling to trophies of their victories as a way of coping with the hardships of prehistoric life. As Naomi Savoie, concept artist for Far Cry Primal tells it, each Wenja tribesman and woman has dealt with their share of hardship.

“They’re all kind of traumatized in a way, because the world of Oros is very brutal,” Savoie says. “They’re all scarred in their own way.”

These characters, like the savage Sayla and the shaman Tensay, become endearing as you venture through Oros. In spite of them all speaking the native tongue of Wenja, a brand new dialect created solely for Primal, you begin to pick up phrases and concepts, and it builds an odd sense of attachment to the people of your tribe.

“The more you play the game, the more you start recognizing things [the characters] say to you because it is an actual language,” Savoie tells us. Linguists were brought on-board to help craft the proto-European language the Wenja speak, and it’s theoretically possible for one to even become fluent in the language these characters speak.

Each of the main tribe members are core to the rebuilding of the Wenja, from growing your tribe to building Takkar’s skills; as a gatherer, hunter and warrior, Takkar must grow to face the hulking Udam and blazing Izila. Your trump card is Takkar’s mastery of wildlife, as he is able to tame beasts and command them to assist in fighting enemy tribes.

From wolves and djoles to massive bears and fierce sabertooth tigers, you can bait animals to tame them and bring them under your growing army of beasts. At any time you can call in or dismiss a variety of animals, to bolster your spears and bows. While you have other weapons, the wildlife is your true unique weapon against the Wenja’s foes.

“When we took the Far Cry series back to the Stone Age, we looked at how people fought and what could be exciting to play,” says Savoie. “The ultimate weapon for us was the megafauna, and we wanted to put that in the hands of the player.”

Each beast has their own properties and abilities, from the jaguar’s mastery of stealth eliminations to the bear’s massive presence distracting enemies and absorbing hits. You can extend your mastery further, learning to strengthen their unique traits and even riding them. Mixed with other upgrades and perks, you can create amazing situations unlike any other title.

“There’s nothing more badass than hopping on a sabertooth tiger and setting yourself on fire and storming into an outpost,” Savoie tells us. And in my own experience, I found myself agreeing with Naomi’s apt assessment.

Far Cry Primal is only a month away, but after the several hours spent with the new spin-off, it feels like anything but a fleeting experiment. Primal has me excited for what the future might hold, with Ubisoft Montreal getting wonderfully creative with the savage frontier and beautiful vistas allowed by the new Stone Age setting. For a game set thousands of years in the past, Primal is one of the freshest takes on a franchise I’ve seen in some time.