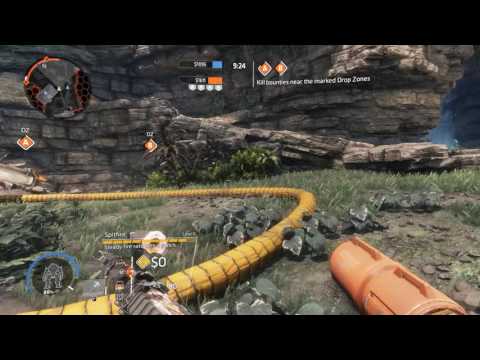 Titanfall 2’s multiplayer has a ton of new features, including a lot of different abilities and weapons.  Here’s a quick look at the Bounty mode, where the goal is to gain as much cash as possible by killing NPCs or stealing from the other team.

Our own News Editor, Joseph Declara did an in-depth look at the Titanfall 2 pre-alpha a few days ago.  If you missed that, here’s a snippet from his preview:

Based on what I experienced during the pre-alpha tech test, Titanfall 2 certainly feels a lot like its predecessor, and it often falls in line with other near-future military shooters. But there was enough new, genuinely innovative additions to shake things up for the game’s multiplayer scene. The grappling hook proved to be an exciting and fun new addition which requires real skill to use effectively, and the classic Titan gameplay is still thrilling, especially as a reward for quality performance on foot. I’d like to see some tweaks in balance between Titans and Pilots, as where it stands currently, Goliath often falls to David. I also hope more focus will be given to objective-based modes to get players working together, though it could very well be too late for that. Otherwise, Titanfall 2’s pre-alpha multiplayer made for a great time, and I cannot wait to see what Respawn has in store for the single-player campaign.

The embargo for our full review is approaching quickly, so as Respawn would say…stand by for Titanfall.