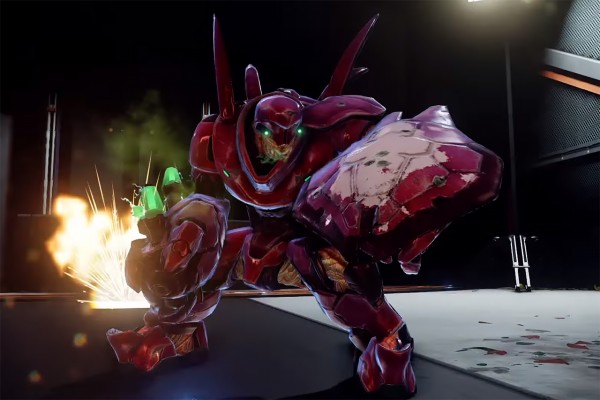 After what many considered to be an ill-advised departure from classic arena combat in recent Halo games, Halo 5’s beta showed players that the series would be returning to its roots. Many fans rejoiced at the end of loadouts, ordnance drops, and armor abilities–myself included. But surely not everyone will be happy to see a return to arena combat, and this seems to be the case with 343 Industries engineering director David Berger, who explained to me the philosophy behind the recently unveiled Warzone multiplayer mode:

Arena multiplayer is great, but Warzone is my favorite. I never get to the scorpion in time! Everyone rushes there at the beginning of the match! Some people have even figured out how long it takes for the scorpion to spawn and set a timer when it breaks, so they can get the next one–it’s crazy. So with [Warzone], it gives everyone a chance to earn their requisitions.

With the recently unveiled Warzone multiplayer mode, 343 Industries aims to have their cake and eat it too, by putting a laser-focus on arena combat, while also branching out and trying something new.

Think of Warzone as being a bit like Big Team Battle on steroids. It’s a 12-v-12 bout that has each team racing to reach 1,000 points, which are gained through defeating AI enemies, and players of the opposing team. Getting 1,000 points does not come easily either, so matches tend to last fairly long (my first match was about 18 minutes). At the outset, each team spawns in an area filled with hostile AI, and are tasked with taking them out. Once cleared, the team is free to roam the world killing AI or player-controlled characters, as well as capturing strategic areas. Doing all of this helps build your personal pool of requisition points (which can be spent on guns or vehicles), and improves your team’s requisition level (which unlocks more powerful groups of weapons and armor to be purchased with personal requisition pools of the entire team).

Adding to the chaos are bosses, which spawn randomly throughout the match. Killing a boss nets a ton of points for your team, but these areas are often swarmed with players looking to collect the bounty on the boss’ head. Additionally, some even tougher bosses will spawn very rarely (only one or two at the most per match), which are much tougher. In my time with the game, one boss in particular proved to be so challenging that the players gave up trying to kill him altogether.

So how did a long time Halo fan like myself fair? Like many Big Team game types, it began with chaos. As a nice way to become acclimated to Halo 5’s controls, our ranks swept through our starting zone hunting down prometheans. Among these foes were new enemy types, most notably an enemy called a “promethean soldier,” who are a more humanoid, more agile version of the familiar promethean knights. Unlike the knights, they’re thin, fast, and hard to hit.

After we cleared the area, the whole map opened up to us, which made me reel from its sheer massive size. Warzone maps are huge, so much so that previous big team battle maps seem puny in comparison. We were given the objective of controlling three areas on the map, which our team rushed for. Between holding our zone from aggressive AI, and fending off waves of attacks from the opposing team, we quickly fell behind. To make matters worse, the opposing team was beginning to get better requisitions, and were spawning powerful weapons and vehicles to attack our team with.

Suddenly, a new objective was added to our HUD, informing us that an elite boss had entered the battle. I quickly snuck past the hail of gunfire and made my way to this new objective, hoping I’d have more luck. On the way, I spotted a requisition dispenser, which allowed me to spend my requisition points during gameplay instead of doing it in the time between death and respawn. I bought an energy sword thinking that it’d come in handy.

The scene that I arrived to was even more chaotic than the one I had left only moments ago. Several members of my own team and the opposing team had already beaten me to the boss’ location, some of them utilizing vehicles. I aided where I could from afar, but before I could do much damage, the covenant boss and his minions made short work of my allies and foes, who were too distracted by one another to put up a fight. I rushed in before the action had died down and took the boss out with a decisive backstab with my energy sword–my team’s score quickly jumped, putting us within range to take the lead.

Not long after my initial run-in with the sangheli boss, a second one appeared, this one much tougher than the last, which I could tell by the yellow health bar instead of the red one, thanks to my developer friend Mr. Berger who mercifully tipped me off. This new boss flew in a banshee and made it rain banshee bombs upon everyone that neared him. What’s more is that he didn’t seem to take much damage from those who attacked him (who were quite numerous). At this point, I realized that I now had enough requisition points to purchase a banshee of my own, and after doing so I brought the fight to the skies to challenge the airborne dictator on his home turf. After a heated battle, we both neared death, and to top it off unfriendly Spartans began shooting my banshee in an attempt to thwart my victory over the mobile menace, but it was too late–my team took the lead as my foe’s aircraft was sent to the scrapheap.

My opponents began to realize that we had taken the upper hand by focusing on defeating the powerful AI enemies, and so began to fight fire with fire. Through a series of unfortunate PvPvE (player vs. player vs. everyone, which apparently needs to be an acronym now), our team lost the lead as the match began to draw to a close. At this critical juncture, another powerful boss with a yellow health bar appeared (that’s bad, remember?). Both teams rushed to the boss in question, killing one another along the way, and were greeted by a powerful promethean foe and his merry band of murderbots. No spartans survived the confrontation.

In a final desperate attempt to steal victory from the clutches of defeat, I used every requisition point I had to purchase a new promethean vehicle called the phaeton, which I had no idea how to use. As it turned out, my decision was not a poor one, much to the disatisfaction of my foes. I glided through the air, pummeling everyone below with a barrage of deadly light, and when fire was returned I simply disappeared using the awesome promethean teleportation ability, reappearing a safe distance away. Now attuned with my new abilities, I returned for revenge against the mechanical monstrosity that had defeated us moments before and ended the match with a decisive victory.

During Microsoft’s E3 press conference, 343 Industries called Warzone the experience fans have always wanted from the Halo series, and as a lifelong fan myself, I couldn’t agree more. According to Mr. Berger, Warzone originated from the desire, “to find the perfect balance of PvP and PvE,” which becomes plainly obvious upon experiencing it firsthand. Moments like the ones I’ve described bring the defeat, victory, and drama of a Halo multiplayer match to new heights. Combat scenarios are massive and epic, mini-objectives keep players engaged beyond mindless killing, and PvP and PvE are expertly combined in a way that fulfill a longtime wish for Halo fans everywhere.