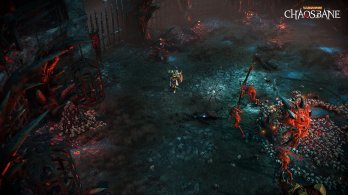 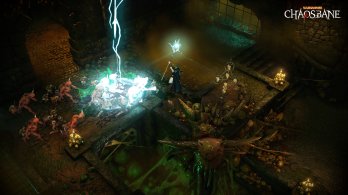 BOOM! We’ve got a hack-and-slash Warhammer!

That’s right, after years of defining RTS – Warhammer has been adapted by the team at BigBen and Eko Software to the button mashing, teeth grinding, “where’s my character?”-yelling hack and slash genre. And boy is it fun.

Details are slim at the moment – there’s still plenty of time before its slated March 2019 release window. What there is to tell comes directly from BigBen:

In Warhammer: Chaosbane, the player will be plunged into the middle of Old World history as they embody a human, a high elf, a wood elf, or a dwarf and discover several iconic locations such as the cursed city of Praag, or Nuln, the old capital of the Empire.

Guided by members of the Eko Software team, my max-level character was dropped into gameplay with the choicest of gear (thank you dev cheats) – this was going to be good. I was walked through the menu system, something built from the ground-up for Chaosbane. The ability to quickly thumb through pages and access key nodes of info or gear seemed pretty standard for any hack and slash game – until we started adding players. Local multiplayer is effortless in Chaosbane. Harkening back to the days of N64, you and up to three friends can join the fight at once. Friends appear instantly in-game, joining as you bludgeon and cast your way through hordes in some of your favorite Warhammer 40K maps. This is where the menu system really shines. Quick and intuitive, each player’s menu populates a small portion of the screen – giving robust control over gameplay without interrupting friends.

Speaking of gameplay: It. Was. Brilliant. Having played many Warhammer titles over the years, it was an absolute joy to unload a day on waves of unrelenting enemies. The game felt fluid, I’d attribute that to my character having most of his unlocked abilities – though control mapping certainly helped. Each character class has their own unique sets of abilities, each mapped to a particular button, or set of buttons – making for intense moments of finger-flailing DDR-level button mashing.

My hands-on served as a cathartic end to a chaotic and crowded E3 show. I look forward to confusing friends by offering a night of playing “Warhammer” – only to treat them to this incredible new adaptation. Though there isn’t much out at the moment, stay-tuned for more updates, and be sure to check out the official page for more details on the upcoming Warhammer 40K title: Chaosbane for PC, PS4, and Xbox One.