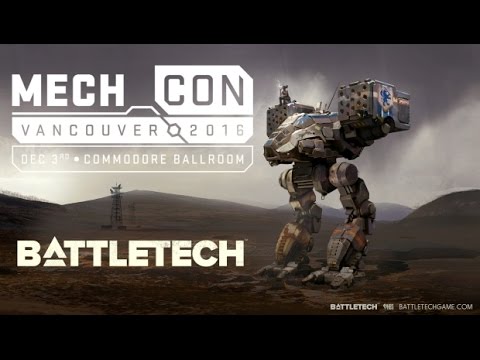 First, an admission — I’m a backer of Harebrained Schemes’ Battletech. As a self-described mech junkie, seeing what the team behind the turn-based Shadowrun revival had in store for the series had me scrambling to support them. I wasn’t alone as the Kickstarter campaign a year ago put $2,785,537 towards that project. At MechCon 2016, I got to see what the team has been up to, going hands-on with the “Super-Pre-Pre-Alpha Demo” showcased at GenCon and PAX with Mike McCain, Art and Game Director at Harebrained Schemes, as my copilot.

It was very plain to me that the team has put a great deal of work into the core combat mechanics of Battletech. The partnership with Piranha Games has given them incredible mech artwork from Mechwarrior Online to miniaturize and use in Battletech. Lumbering mechs like the Atlas shake the ground as they walk, vehicles explode in a shower of sparks and fire, and smoke contrails follow missiles to their destination, hanging in the air for a moment. For a game in early Alpha, it’s already very polished.

Battletech will feature a full singleplayer experience, as well as PvP and solo skirmish modes — the two skirmish modes being a core component in the upcoming beta for backers above the $50 level. The demo you see above is a slice of a single player mission, showcasing some of the personality the game brings over its FPS counterpart. A large part of that comes from the fantastic initiative system.

It’s amazing how gorgeous this looks after only a few months.

Initiative is the ability to act in combat. To capture the essence of piloting a nimble mech like a Locust versus the lumbering behemoth assault mech like an Atlas, Harebrained assigned an initiative modifier to each weight class. A light gets an initiative of one, a medium gets a two, heavy receives a three, and assault moves slowest with an initiative value of four. While that alone is a great addition to the formula, the ability to reserve those points to delay action creates a real tactical advantage. In combat a lighter mech might move into a forest for a bit of cover, and then save their next initiative to postpone action. As a medium mech lumbers past, unable to see them due to the terrain, the lighter mech can then take that late-round initiative action to unleash an attack on its weak rear armor.

I’d be remiss if I didn’t mention how important terrain is to mech combat. Mountain ranges block line of sight, keeping an assault force shrouded until the trap is sprung. Forests provide partial obfuscation, blocking some incoming fire against the tree cover. Water slows mechs down, but also reduces heat dramatically, allowing more frequent weapon fire without shutting down. In a turn based game, where you stand and to what direction you face has a huge impact on your survival.

Customization will play a large role in Battletech

You can’t hit what you can’t see, but that only tells part of the story here. Light mechs are your spotters, and what they see, the rest of your lance can see. This becomes important when you are engaging at long range, obviously, but it’s the way it plays with terrain that is a game changer. In the ambush scenario above I was able to unleash long range missile barrages from my Griffin mech’s LRM10 over the top of the mountain with impunity thanks to the shared vision of my teammate.

I did get to see a behind-the-scenes build that showcases a lot of what Jordan Weisman (the creator of Shadowrun, Crimson Skies, BattleTech and MechWarrior), Co-Director Mike McCain, and Co-Founder Mitch Gitelman (MechAssault, Crimson Skies, Shadowrun Returns/Dragonfall, Golem Arcana) were emphasizing as the direction for the game as we move towards the Backer Beta in Q1 2017 — making combat amazing, and coupling it with a strong narrative fueled by a fully-featured mercenary economy. Getting a glimpse of the new melee mechanic (something mech games have rarely done well), the lighting improvements, and the general level of overall polish, I can say that fans and backers will be incredibly impressed with the next milestone / demo from the team. It wasn’t quite at a state where I could capture it for you, so you’ll have to take my word for it for now.

After a year of development, the game looks to be shaping up nicely. The team showed me a behind-the-scenes looks at their upcoming milestone build and there are some very cool new features to be excited about. While we still don’t have a solid release date for Battletech, there is every indication that the team are just as much of fans as we are. We expected good things — they delivered.