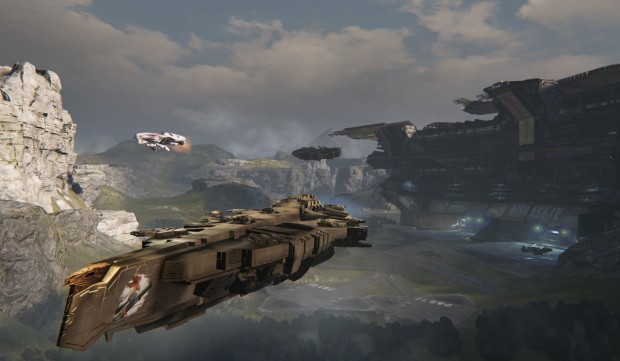 I was caught completely off guard – I think I’m in love with a Free-to-Play game.

Sitting down with the folks from Yager reminded me of their previous work. Spec Ops: The Line is, by far, one of the best (and criminally underrated) shooters of the last generation, giving us all one of the most memorable settings and storylines. You’d figure that such an incredible shooter would firmly cement Yager’s future in that genre, but you’d be wrong. Let’s start off the way our demo did – with this fantastic video:

Dreadnought is a game that takes place on very big spaceships. Inspired by shows like Battlestar Galactica, Star Wars and Firefly, Peter Holzapfel, Game Director for Yager explained that they want to make a game that focuses on the incredible captains that would do anything to keep their storied vessels in the sky. If you’ve ever dreamt of commanding the hulking behemoths, unleashing entire gun batteries and super weapons against your foes, read on.

Dreadnought’s class system is based around the fives sizes of battleships and the captains and crew that command them. The smallest ship is the Corvette class, prized for faster speed (comparatively speaking) and their forward-facing guns. All of their special abilities are focused around this run-and-gun tactic, allowing them to blink warp in and out of combat, closing quick and launching heavy torpedoes that would otherwise be easy to dodge. In any other space sims, the Corvette would be a dangerous capital ship requiring dozens of ships to destroy, but there are much bigger ships in flight here.

The next class in Dreadnought is the Destroyer. This mid-class ship is a general all-around craft, able to field a substantial attack while absorbing a solid amount of damage. It’s likely the class you’ll start with (we did in the E3 demo) and serves as a great ship to learn the mechanics of the game.

The namesake of this game is the largest of all of the ships in Dreadnought. This powerful behemoth is slow, armored on all sides, and sporting weapons in every direction. Able to engage at incredible distances, the Dreadnought is unmatched in terms of firepower. All of that said, she is not invincible. Slow and hard to maneuver, the Dreadnought is usually best deployed with other ships in a support role.

A surprising class to see, the Artillery Cruiser instantly reminded me of the sniper battlecruiser in Orson Scott Card’s Ender’s Game that unleashed the Molecular Disruption Device that destroyed the Formic homeworld. Geeky reference aside, this ship is essentially a flying sniper rifle, able to deliver incredible damage in a very targeted fashion, and at incredible range, but with a very long recharge cycle.

The final class of ships is likely the most important of all five – the Tactical Cruiser. This ship fires a forward-facing beam that can either repair ships on your team or deliver pinpoint damage on enemy vessels. The healing beam amplification skill and having a competent flight partner was likely the key to my 4:1 kill-to-death ratio, but I’m getting ahead of myself.

Sitting down at a bank of PCs, we split into two teams to square off in a Team Deathmatch battle. Selecting the Destroyer class I started hunting down my fellow press members. Holding the Q key I adjusted my power to thrusters and hurtled towards the closest Tactical Cruiser to ensure the team lost their support craft. When I got close I shifted all power to my guns and unleashed a barrage of primary and secondary weapons at near point blank range. The Tactical Cruiser was far more maneuverable, but couldn’t escape fast enough, breaking up over the lush green landscape. I found myself in the middle of the map, above winding canyons that would otherwise keep me safe – this is the absolute wrong place to be in a large and slow spacecraft. I had incoming fire from nearly all directions. Diving down into the canyons, I switched my power to shields to keep my ship intact during descent. Gathering my power reserves once again as I cruised through the protective canyons I stumbled upon an enemy Artillery Cruiser that was popping up above the ridge to snipe my teammates. Pushing power to forward weapons again, I cut this ship to ribbons as it attempted to use its feeble weapons against my superior craft. The team at Yager were having none of my shenanigans, and I found myself the target of an all out assault after I cut down two more of their pals. As my ship exploded in a massive fireball, I left those nearby with one final taste of vengeance – a close range nuclear explosion.

Every ship in the game feels incredibly powerful, well balanced as a group, and each feels like it has a purpose on the battlefield. Sitting down with Peter Holzapfel again, we talked about how progression would work in the game. With Dreadnought coming in early 2015 much of what Yager is working on is still in the balance and development stage. Though we didn’t get to see it, the team tells me that there will be officers on the ship in command of crews that handle your various ship subsystems. Weapons, Navigation, Engineering, and Tactical will provide bonuses to each of their respective areas, but it is your ship captains that will provide the most influence, thus giving global bonuses to all of their officers. Yager isn’t pinning down just how many perks ship captains will be able to select for their crew quite yet, but they say it nears 100. Again, we haven’t seen it for ourselves, but the team describes these perks as similar to what we’ve seen in XCom: Enemy Within.

This free-to-play game isn’t just Deathmatch variants though – Yager is planning a full single-player experience for when the game ships. They are also considering cooperative single-player modes to further expand the experience. They’ll also provide multiple terrains, offering up an asteroid-filled starfield in deep space as a second example to the canyon map we experienced. As the game remains on a semi-vertical plane for the most part (you can raise and lower altitude, but you don’t attack from obtuse angles like you might in, as an example, Homeworld), using terrain and navigation is key to victory.

Yager isn’t wanting to make a trope-filled good vs. evil game here, nor are they going to allow anything that approaches pay-to-win. They also don’t want to use established F2P models like World of Tanks as examples of how to approach giving players new content without allowing anyone to buy their way to victory. They are also looking to create episodic content, using periodic releases to further tell the story that closer approaches a war of colonialism.

I’ll reiterate again that I find the concept of free-to-play to be, for the most part, completely broken. Very few games have gotten it right, with the rest being relentless cash grabs and endless restrictions. Yager seems very adamantly opposed to being included in the latter group. They’ve worked very hard to create a game that is compelling at its base, and this is only an early alpha look. With three quarters of a year before release, Dreadnought is already polished and fun enough to eclipse a great many finished products.

Look for our continued, and very eager, coverage of this surprisingly incredible new space battler. In the mean time, check out this compelling gameplay video of Dreadnought in action.