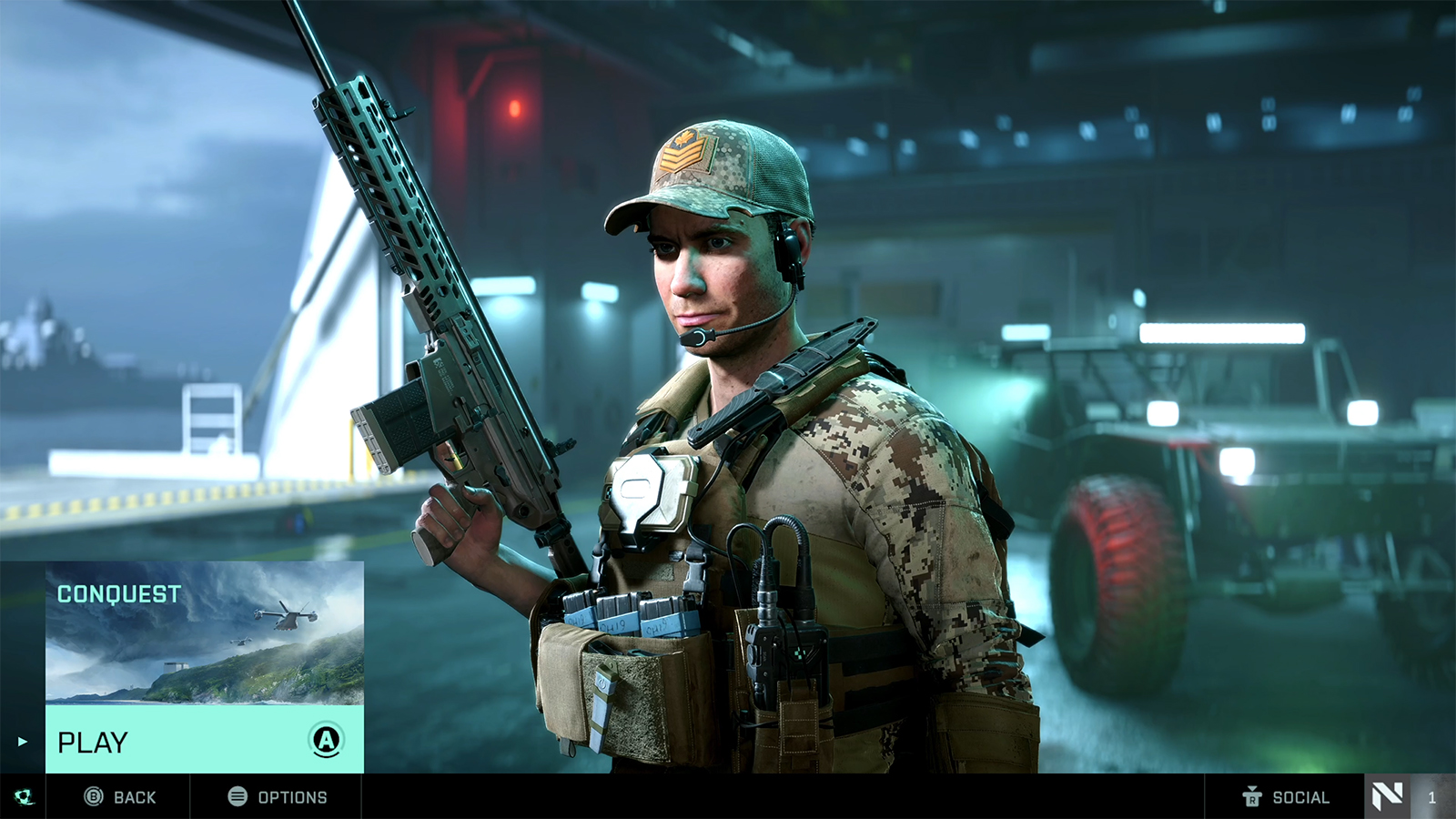 Battlefield 2042 might be DICE and EA’s most ambitious Battlefield game and, from my first glance at the open beta with roughly about seven hours of play, you can immediately tell that despite 128 players on Xbox Series X, PS5, and PC, it still flows like the Battlefield we know and love. But this beta doesn’t deliver anything we hadn’t seen before in a Battlefield game. Whatever EA has been advertising to us the last few months, it’s hardly represented here.

Instead of playing as a generic soldier, you play a specific class that even has their own name. Each class comes with specific gear that only they can use – only Assault can use the grappling hook, for example – but the rest of the gear slots can be customized as you please. I decided to equip my Assault class with a medkit in case my squad didn’t have a Support or no one was around to heal me. The amount of customization feels like you can run the type of character that actually fits your playstyle or situation, and it’s much needed considering how wild games can get. I can’t say every gadget each class has is useful when playing alone or without voice chat, but it’s undeniable they change how engagements work and it’ll be interesting to see how people utilize them when the game launches.

The only map available during the open beta is Orbital, which is a rocket launch site that has an incredible Levelution showcase at the far end of the gigantic map. The change of the point hardly makes that much of a difference, though. Once the rocket launches, you’re clear to use the launch pad it blasted off from, which creates a wide line of sight and holes you can drop through to your death. The added line of sight does make defending or attacking riskier, but the actual impact doesn’t feel as crazy as the crumbling tower in Siege of Shanghai. Apparently, you can also destroy the rocket and that’s supposed to change how that specific point looks too, but that never happened to me before I published this. 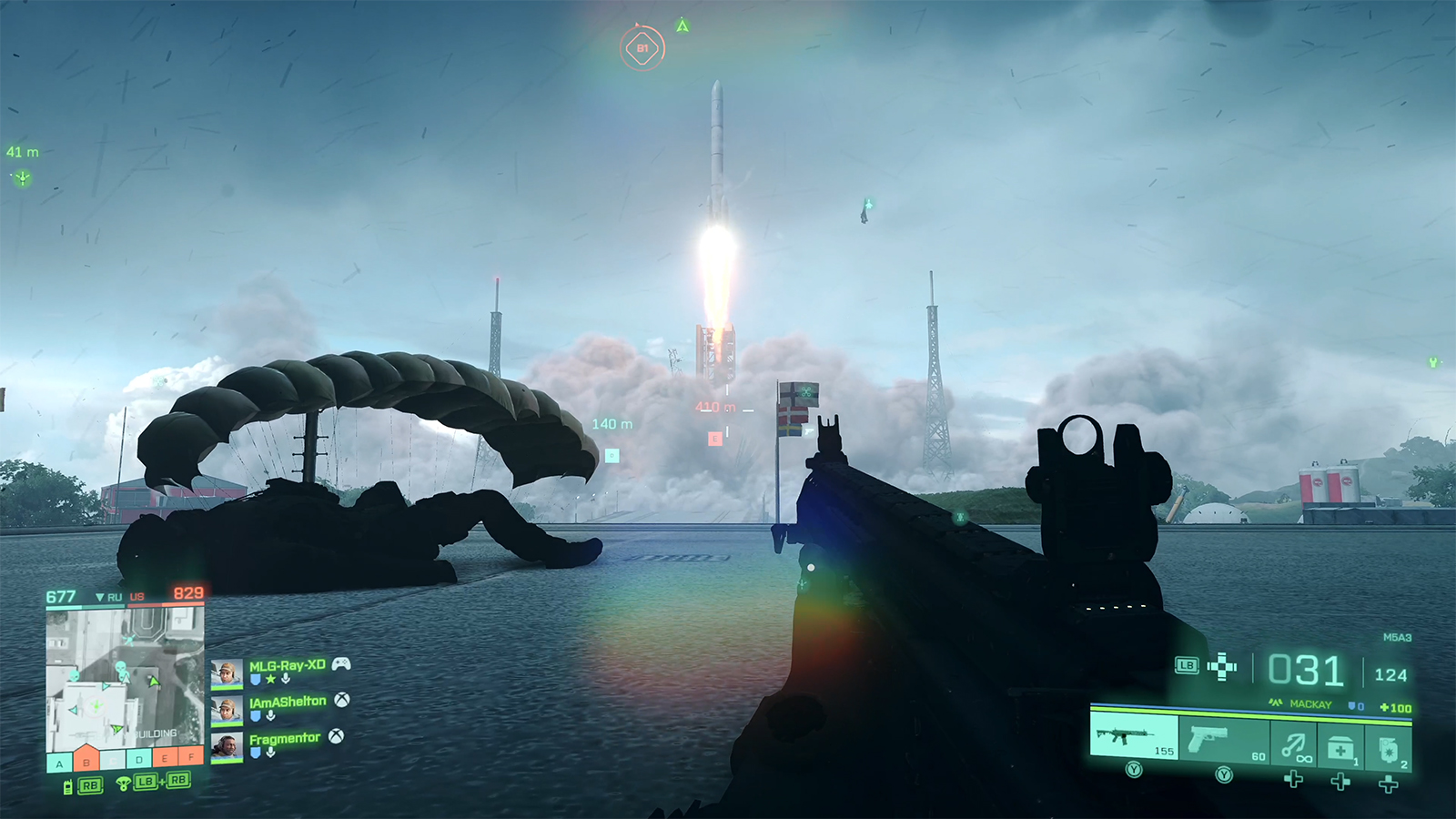 Orbital is an enormous map and it’s not even the biggest map in Battlefield 2042, but the way the map is designed doesn’t make it feel like battles are any further away compared to previous Battlefield games. However, when there’s no one around, it feels really empty, and running through the map to get to another point feels like an eternity. Thankfully, you can airdrop your own vehicle to quicken the pace, but you’re only allowed to airdrop vehicles when they’re available. If someone just dropped the vehicle you’re looking for, you won’t be able to for a little while.

What’s baffling is the lack of destruction. I imagine it’s partly because Orbital doesn’t have a lot to destroy since it’s mostly foliage with the tarmac and launch pad in the middle, but I don’t expect foliage destruction to be the showcase of next-gen Battlefield destruction. It feels like Golmud Railway from Battlefield 4. Lots of open space and a few buildings you can blow some holes in but nothing that feels like your cover is blown from a tank blast. What is impressive are the craters that form when rockets or any heavy explosive hits the ground. They can litter the area and even become cover if they’re deep enough. It’s not particularly – ahem – ground-breaking, but it’s a nice touch that adds to the epic feel Battlefield tends to bring.

The hardest aspect to wrap my head around before this beta was capturing points. There are sectors and multiple objectives within those sectors, but the objectives are simply added points to capture even though DICE made it sound like we would be doing other activities as well. So instead of capturing an individual point to help towards gaining control, some areas require that you capture multiple points to command the sector. On Orbital, sector C has two capture points labeled as C1 and C2, for example. Only when you have both, can you start earning points for your team should you have control of most sectors. The fight over points is still as intense and chaotic as expected, but because the map is so wide, it’s difficult to figure out which point needs offense or defense until you get closer to it. I particularly lament there’s no way to pull up a map to quickly see everything that’s happening. It’s only when you die you get a full overview. 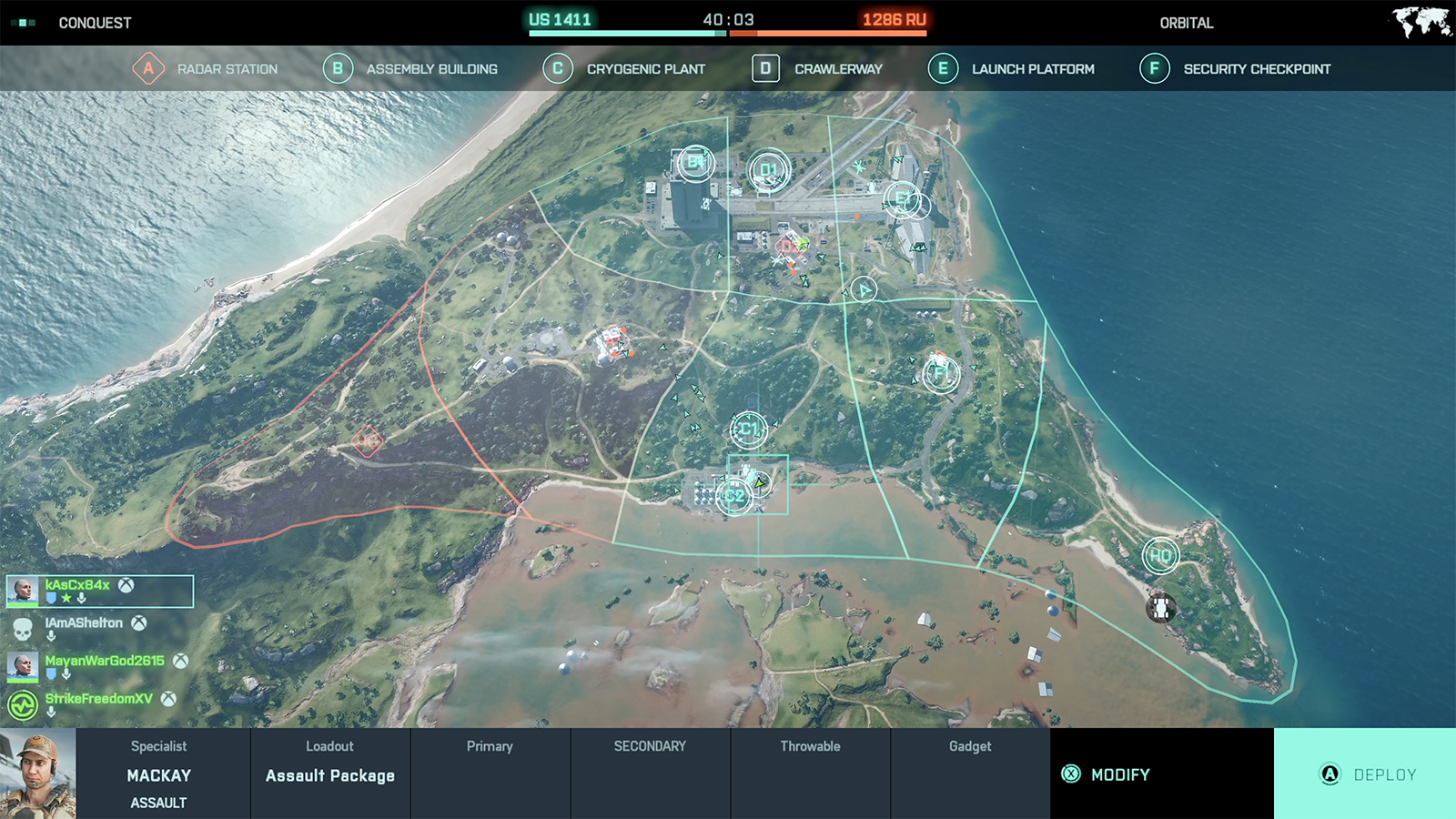 One of the biggest draws of Battlefield 2042 has been the idea that a tornado would sweep through the map and wreak havoc wherever it decided to, absolutely obliterating any idea of a stable fight. I only saw one and it was coming slowly from out of bounds. By the time it might have become something to be concerned about the match was over. I don’t know why it hasn’t happened more often. The lead community manager said this is not the current build, so perhaps they’ll increase the rate tornados touch down on maps. If this open beta was meant to give us a taste of what’s to come, this plate doesn’t have all the samples.

Battlefield retains its epic sound design but the beta is affected by low volume or muted sounds. The guns clang, crack, bang, with a very clear fidelity, not as much pure bass, but explosions aren’t booming with the same power or resonance. It’s like every explosion is far away or the sound of the blast erupts and quickly dissipates. Vehicle engine sounds still retain their normal heft and gunner sounds carry appropriate boom and rat-tat-tat-tat, but overall the sounds lack the oomph previous games had so far.

The most egregious part of the beta that clearly signals the reason for the delay is the abundant amount of physics glitches, screen artifacts, and latency issues. One game featured constant flickering. Frequently I’ll come across a body that’s standing and it’ll drop dead as soon as it comes into view, which is problematic as I thought I needed to aim there and that distracted me from another opponent. Many times bodies ragdoll in place and while it’s hysterical, it’s a clear sign of the underlying issues still present a little over a month before launch. Rubberbanding has also made a return, but that hasn’t been as huge of an issue on a match-to-match basis. When it shows up though, it’s ugly. 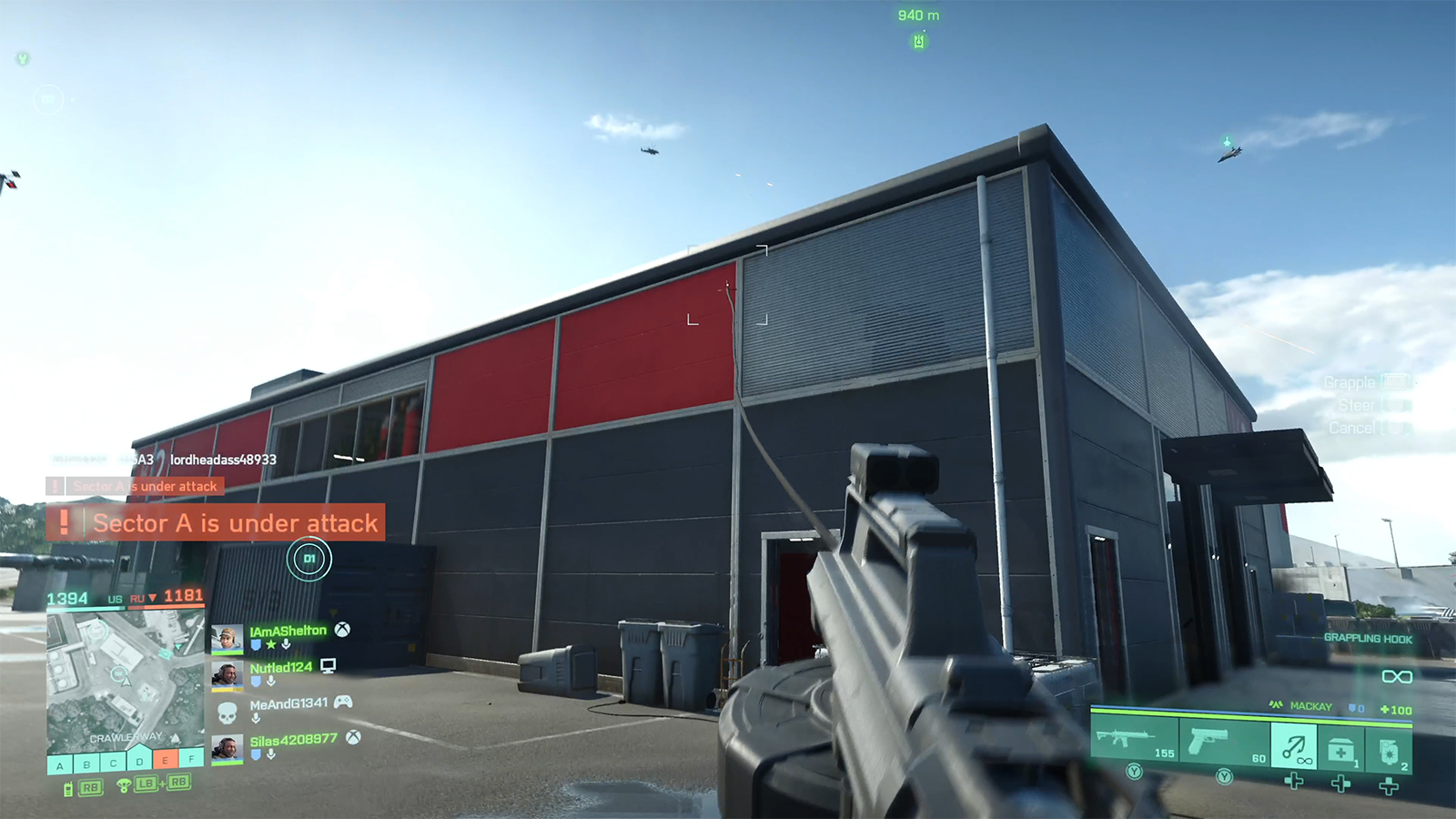 What isn’t ugly is the overall performance. On Xbox Series X, the framerate is very smooth. Whatever performance issues that do exist don’t come from the black box very often. The way the foliage moves in the wind, the way the smoke billows out of an explosion, and the dynamic weather showcases the power available in next-gen all while maintaining 128 players.

Many of these issues can be fixed before launch and, perhaps, when the full game launches performance could take a hit. You never know. It’s Battlefield. How it launches is about as unpredictable as the matches themselves. What’s clear is that despite the massive increase in player numbers and map size, the shell of what makes this a Battlefield game isn’t compromised. There’s a lot of chaos, lots of explosions, and the general intensity of the game remains, but it is clearly riddled with all kinds of technical issues that stand to create a cobbled mess of a launch if the issues aren’t resolved in time.