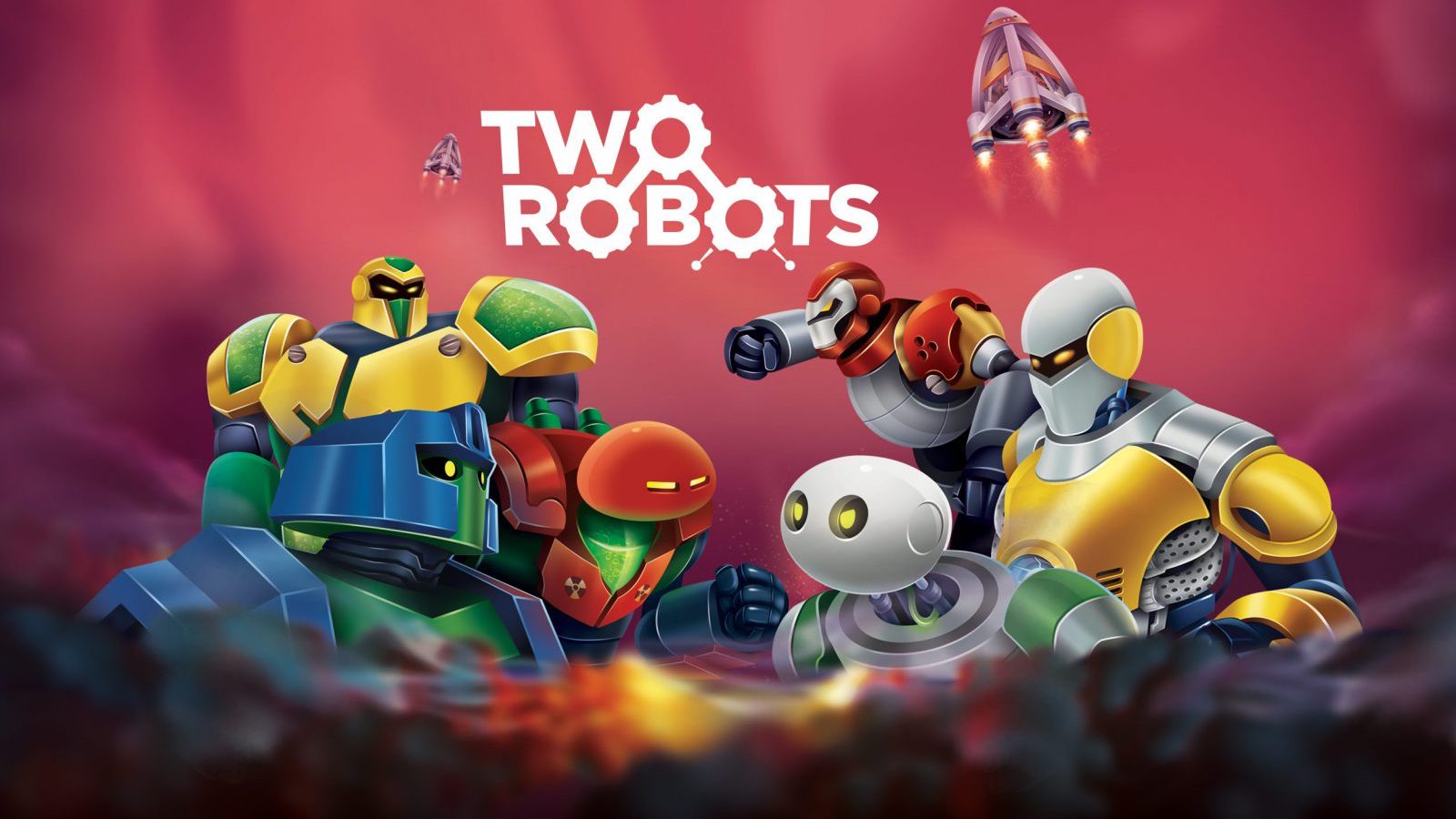 It’s the year 2876 on a planet called Rennova. A great robot war has just ended, and mankind begins to literally pick up the pieces, but they keep an eye on their neighbor, fearing future attacks. Two Robots is a competitive card game for 2-4 players by a brand new company in Austin, Texas of the same name. 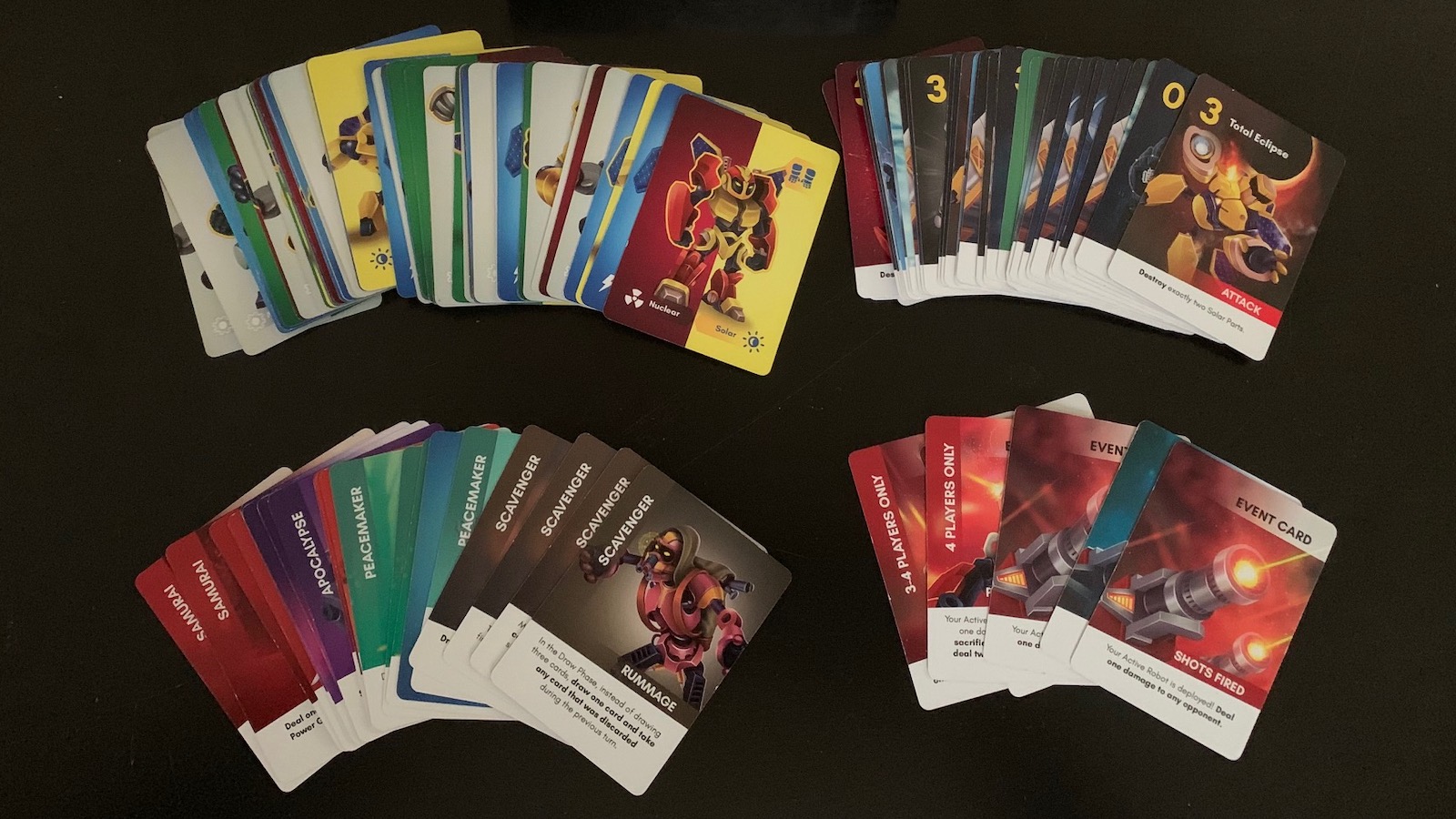 In Two Robots, your goal is to pick up the pieces of the fallen robots with one of your unique Salvager robots. You win if you build, you guessed it, two robots. These robots have five different energy types: Chemical, Electrical, Mechanical, Nuclear, and Solar. When you go salvaging for parts to build, you are dealing with four types of parts: The head, body, arms, and legs. Gather all these of the same type, and you have yourself an active robot ready to do your bidding. Should you choose a more aggressive route, you can also use these robots to simply eliminate the other players for the win. 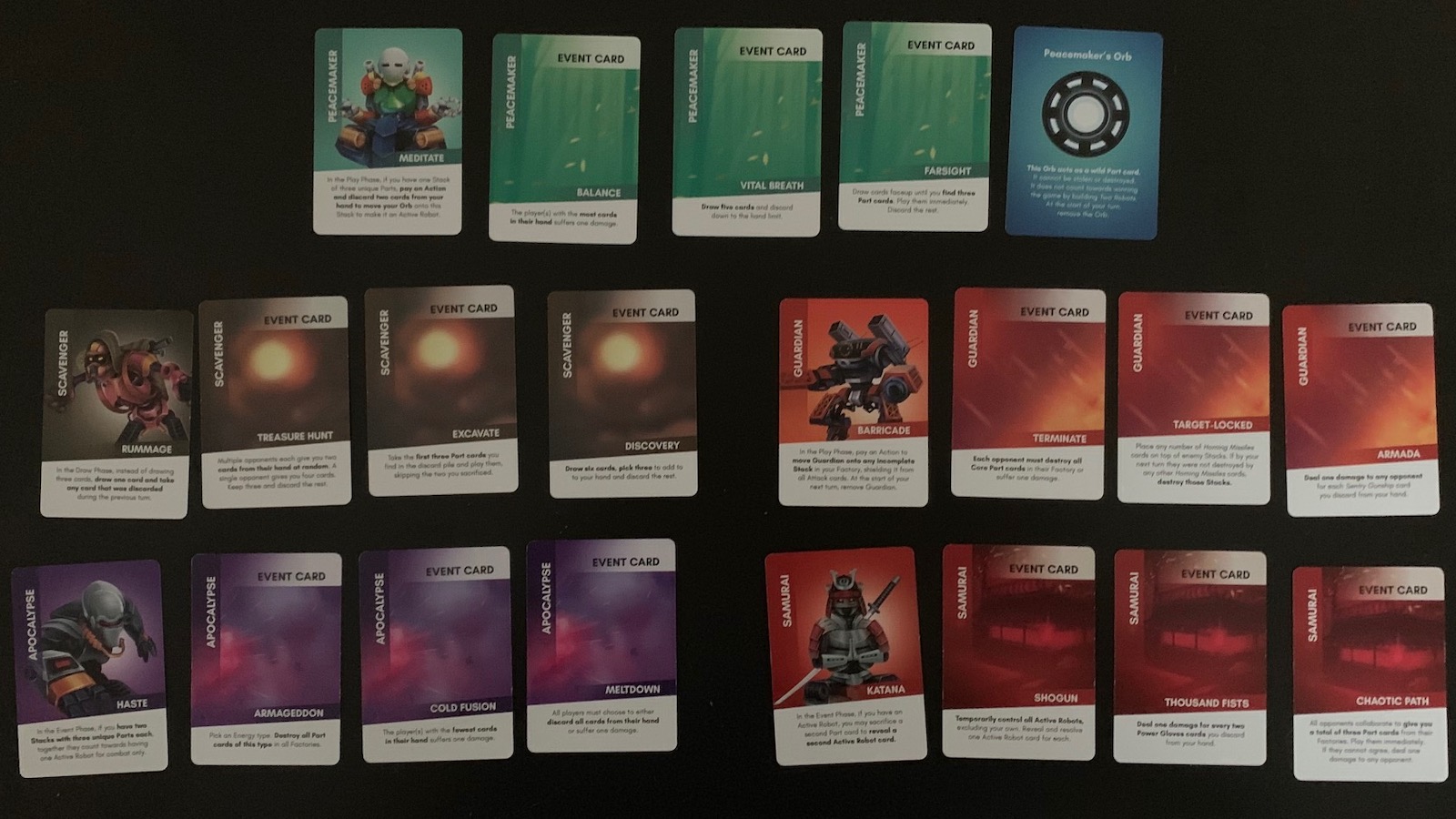 Each player starts with their Salvager card and three Salvager specific event cards placed face down. It is important to note that while these powerful event cards are yours to use on your turn, they are also your life meter. Every salvager has 3 life points, and if you use an event card on them, you flip it over making yourself weaker in the process. If the other players attack you and make you flip the other two, you are eliminated. Event cards should be played with extreme caution.

On a player’s turn, they first draw 3 purple action cards into their hand. They can then play up to 3 cards if they wish. This deck contains three types of cards. The Robot Parts cards have one of the body types in one or two of the energy types. Some of the parts are from hybrid robots, and use 2 types of power. It is up to you as to which type of robot you commit this card to. You can only have one of each type of energy pile going, so if one of those is already committed, you’ve got no choice but to use the other when starting a new stack. You play these cards by simply placing them in front of you grouped by type. You can have multiples of body part types in each stack, as you may need to use them for a type of action currency later. 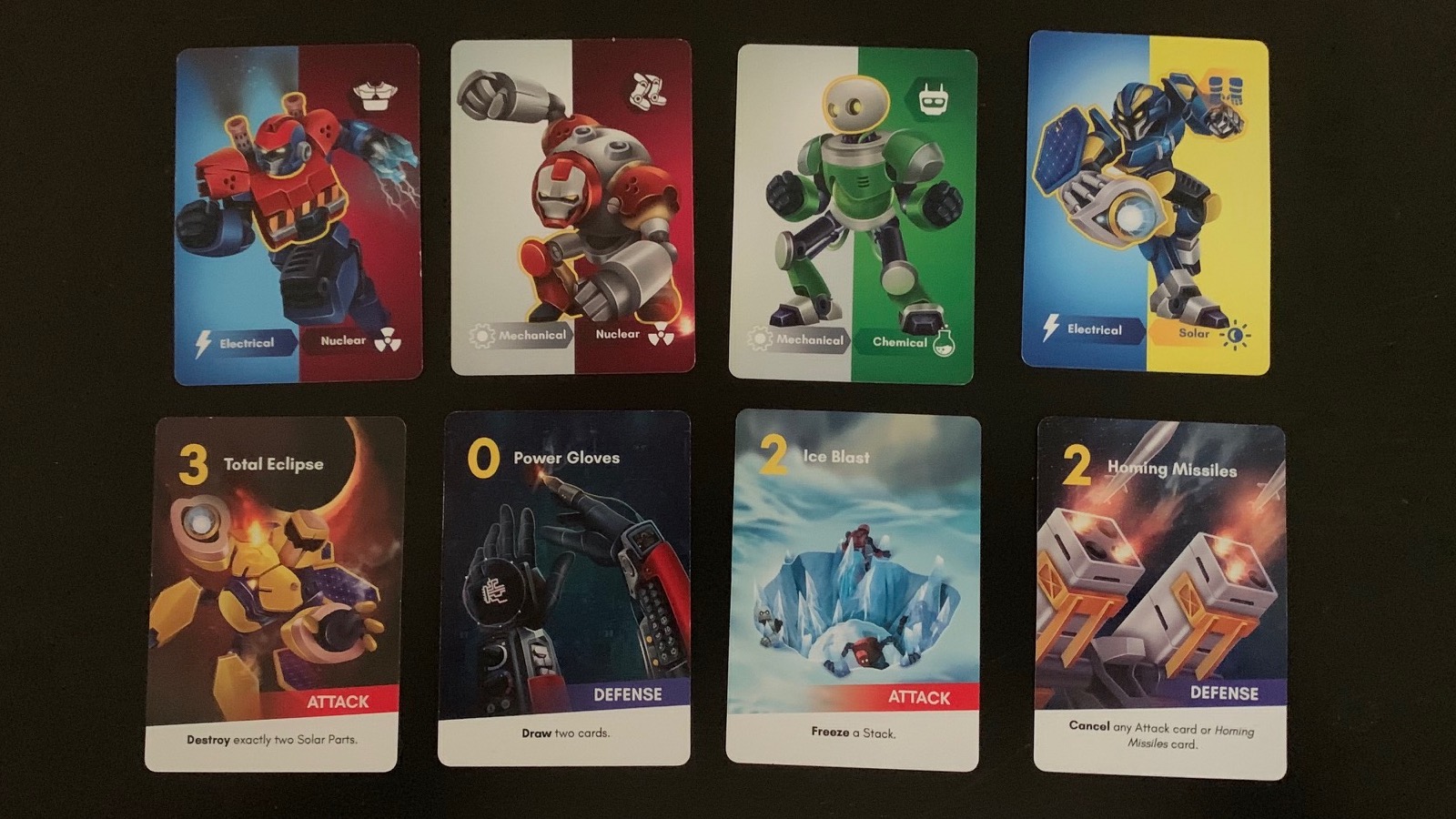 The second type of card is the Attack card, which players can use to chip away at their opponent’s Robots, or halt their progress. These cards let you steal parts, destroy parts, or completely freeze production on a robot. There is a number at the top left corner of these and the defense cards. This number is the minimum number of robot stacks you must have in progress in order to use this card; however, the stack doesn’t have to be completed, just present and in front of the player.

The third type is Defense cards. These can interrupt the aforementioned attacks, get you more cards from the action deck, unfreeze your robot, or cancel event cards.

After playing action cards, the event phase happens. In this phase you can sacrifice two part cards from your piles (remember, you can double up on them for this very purpose) to flip those powerful event cards in front of you to try and damage your opponent, but again, your life meter goes down as well. Some of these cards let you control other robots, and make them fight, destroy multiple parts all over the table at once, draw action cards, or steal cards from other players. The other option during this phase is if you have successfully built a robot then you can deploy that robot to attack your opponents. To do this you simply draw an Active Robot Card from the small pile. This acts as a sort of dice roll to determine whether or not your attack was successful. It’s a very small deck that depending on player count, consists of 4-6 cards, one of them signifying an unsuccessful attack. 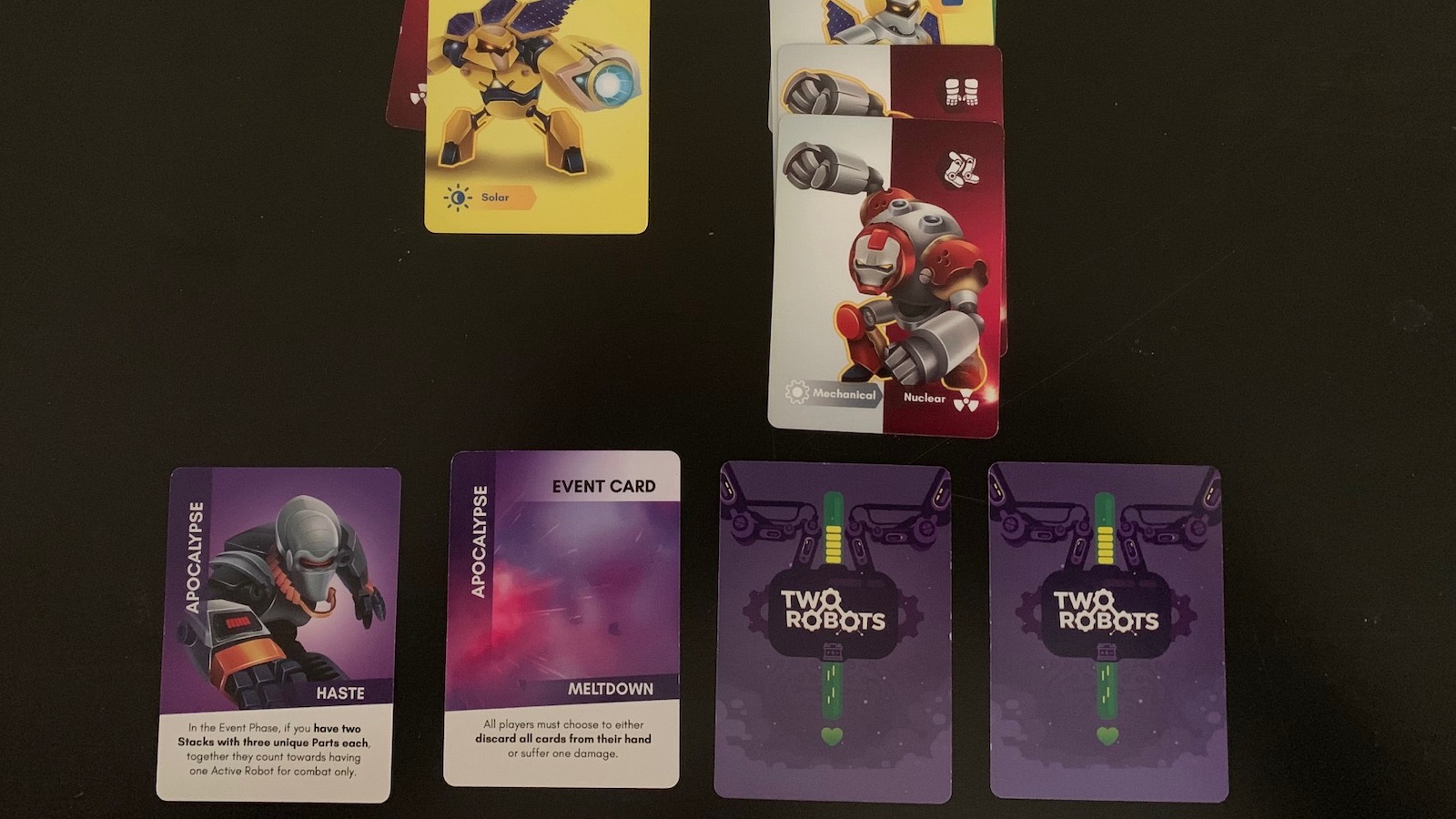 This is all you need to play Two Robots! I got to sit down with Omar and Aaron (or Robot One and Two as their Kickstarter page shows) and play with them. I’m going to be completely honest here, and say that meeting with brand new game designers to play their first baby made me nervous. What if I didn’t like it? Making a great game is hard, and there are so many pitfalls a new team can fall victim to. They sat us down, and enthusiastically talked about their project and showed us the game. I leaned into an enthusiastic mood as much as I could. Any fear I had that I wouldn’t like the game was quickly put to rest as the game is really fun! Play is quick, and easy to understand. The different roles you can play changes the experience from game to game, and unlike a lot of “take that” style games, the multiple paths to success keeps the game brief, and not one note. Games like Bang! can drag on forever with people shooting, healing, healing, shooting etc. This game can have two people obsessed with that type of game, while a third quietly builds their two robots for the win.

The artwork is simple but effective, and I’d be willing to bet their budget is less than other games that sport the same quality. You can tell they have a love for all things robot. Their are clear homages to Transformers, Iron Man, Gundams, and even Wall-E maybe?

Best of all, the game is small. I almost forgot that I’ve been carrying it everywhere in my backpack since our meeting, ready to play at a moment’s notice! I feel with simple fun quick games such as these, transportability is key (I’m furrowing my brow at you, Bang! The Bullet).

If I had to critique it, I’d say that relearning to make sure I wasn’t missing anything was a little more difficult than it should be. Maybe it’s just me, but the importance of the Event cards/health meter seems kind of washed over, and I had to search for it a little. Also, the rules tell you to go in counter clockwise order around the table, but also mention that the Scavengers should be played in a specific order. To me this means first time players will sit down, assign roles, and then have to get back up to sit in the right order, or have to keep checking the rules to see whose turn is next. I think the simple addition of initiative numbers on the Scavenger cards themselves could fix this problem. I also think that as I said, it does a good job of avoiding the overly long sessions of some other “take that” games, it doesn’t completely fix this. This isn’t a critique, but rather a warning for people who don’t typically like this type of game. Games can go on a little long once in a while, and if that bothers you, maybe Two Robots isn’t for you. I for one don’t feel that way, and had a fun time with this first effort from this new crew.

You can support them on Kickstarter now here. It’s pretty cheap, and you’d be helping out a solid new crew.