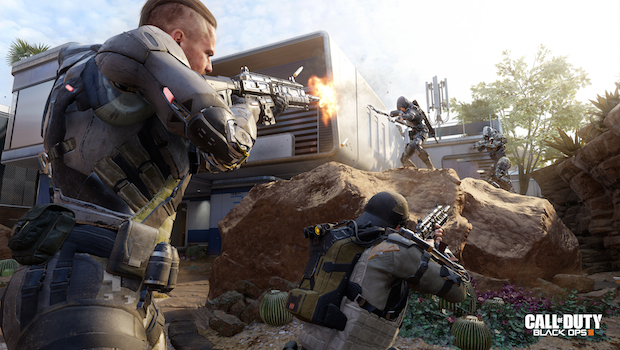 After a night spent with the multiplayer of Black Ops III, I could only think of one word: control. Treyarch’s shooter wants to put you in control of as much of the game as possible, and then open the gameplay from there. Decision-making is critical to the combat loop of Call of Duty, but that decision-making can only feel effective when the player has control over every aspect of their inputs.

Unlimited sprint is one of the most basic ways that control is enacted. Now it’s always a choice to be sprinting around, or to move slower with your gun quickly available. Black Ops III has also included “boost jumping,” but don’t mistake it for the same breed as Advanced Warfare. Thrusting is metered, and you can only use up so much of your power meter before having to recharge.

Positioning and movement is just as important as a quick trigger finger.

That movement, while metered, takes on a lot of life when you start chaining movements together. Wall runs, power slides, thrust jumps are available, and in most cases, omnidirectional. You can reverse wall slides, run forward and power slide at an angle, slide out of a jump, and chain almost all of your moves together. During all of these, your gun is out and able to be fired, allowing for constant reaction to any threats.

Movement is a core component of Black Ops III’s combat, and often it was the small movement choices I made in the heat of the moment that defined my performance. It’s not about constant movement and thrusting, but understanding when to do it, and when not to. Watching an opponent waste a slide meant they were sitting ducks for me – but if I didn’t have the option to slide or thrust myself, I could easily be downed too.

Specialists are one of the biggest changes to multiplayer, bringing class-based warfare to the Call of Duty blueprint. Each character is now defined, with a backstory and theme, and each has two different special abilities to choose from: a weapon, or an ability.

The specialists are extremely varied, and focus on strengths meant to encourage certain playstyles. Outrider is a sniper, who can choose between a bow with explosive-tipped arrows, or an ability that pings an area around the player and reveals nearby enemies.

Prophet was a favorite of mine, packing a lightning gun that insta-killed enemies and electrified their bodies, killing any other nearby opponents after a short delay. While the lightning gun was good fun, though, I really fell in love with his Glimpse ability. Using Glimpse simply jumps the player back to the position they were in a few seconds prior – a simple concept with infinite applications. I was able to get behind enemies who snuck up on me, play distraction and zip around enemies, and save myself from death multiple times.

Outrider’s bow emphasizes her sharpshooter abilities, while giving her an explosive edge.

These abilities and weapons are earned through a charge meter, that slowly ramps up throughout the match and is accelerated by getting kills or objectives. While the charge meter persists through death, you still lose it on use and have a limited amount of duration before the meter hits zero, so there’s constant decision-making in whether to burn the meter or save it.

Weapons are standard fare, with a mix of SMGs, assault rifles, snipers and shotguns, though each of them felt distinguishable from each other in a way that made them unique within their class. A lot of the chaff has been removed – there wasn’t ever a moment where I felt that one gun was just a reskin of another. Each served a purpose, and especially tended to meld with different specialists in different ways.

The guns are made even more personal by paintjobs in the new-and-improved Gunsmith and paintshop. You can add up to five attachments alongside an optics slot, though you’ll be sacrificing some of your Pick 10 to do so. Gun bodies are now fully customizable, with 64 different layers and a huge variety of tools, like transparency and materials, to augment your designs with. There are three unique designable areas – each side of the weapon body, and the area just under the sights. Don’t worry,though; camos are still around, and these designs only affect the main body of the weapon, adding a nice signature to each of your guns.

Map layout has molded to accommodate the idea of chain movements, and there are discernible paths that perceptive players will be able to take advantage of. Once you become accustomed to looking for certain areas, you’ll be able to take advantage of clever wall runs and high vantage points, accessible only to those who utilize thrusters effectively.

It was a short slice, but what I’ve seen has already assured me that Treyarch is working to bring fresh dimensions to Call of Duty that have never been explored before. Class-based character selection, omni-directional movement, unlimited sprint, Gunsmith… Black Ops III isn’t just upping the action, but giving more choice and options to players, allowing them to personalize in ways they hadn’t before. Black Ops has launched into the future, and so far, that horizon looks very promising.