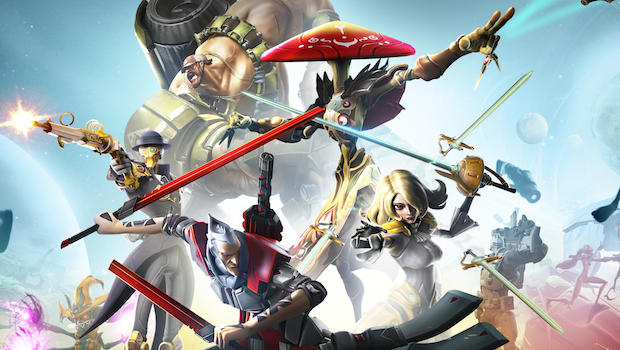 Battleborn represents a huge step forward for 2K Games. A co-op, character-based shooter with elements drawn from many genres, mediums and ideas, there’s a lot of cogs moving at the same time. When Gearbox Software brings them together, though, the result is simply one of the best class-based shooter experiences I’ve played.

At first blush, there’s a lot that will remind you of Borderlands. The aesthetic, the quirkiness, and the mechanics all feel like you’re back on Pandora. Battleborn, however, is set in a variety of locales, focusing on the conflict for the last remaining star in the universe, Solus. While that conflict is between factions in PvP, the campaign revolves around those factions banding together to fight off the threat of the Varelsi, an alien invader seeking to destroy Solus.

Players can pick any combination of Battleborn, without worrying about composition.

My time with the game was spent in the co-op portion, fighting my way through a level of Varelsi intent on ripping me to shreds, until I reached the climactic boss fight against a massive enemy with multiple deadly attacks and a personal army of minions.

Where Battleborn sets itself apart is the use of different heroes (the titular Battleborn) instead of standardized classes and loot. When you start a mission, you’re greeted with a character select screen filled with different characters, all specializing in their own variety of mayhem and carnage with two skills and an ultimate.

Each character flourishes their own unique weaponry on-screen, though sometimes they occupy more screen real-estate than desirable.

You can play as any character, and as you progress through the level, you earn experience and gradually level up, eventually gaining high-powered upgrades that change your loadout completely.

My time was spent with the Chaos Witch Orendi, a four-armed sorceress who was equal parts deadly mage and punk-rock psycho. Orendi could place an explosive charge of chaos energy that knocked her back, cast a column of black fire that incinerated enemies, and her ultimate created a devastating blast of chaotic magic. Like a strange mix of League of Legends’ Jinx and a skilled mage, most of her personality and playstyle revolved around creating chaos on the battlefield. Just my kinda gal.

Miko brings both damage and a useful heal to the fray, always keeping his teammates topped-off.

As you gain experience in battle, your Battleborn-of-choice levels up and gains points to use on skill upgrades. These upgrades are straightforward, option A or option B, but the upgrades themselves are very interesting.

You can choose to skill into certain playstyles very easily; with Orendi, I could choose to take abilities that decreased her cooldowns so she could spam her abilities constantly, or choose to increase their power. One level had me choosing whether I wanted casting Nullify to lower my Pillar’s cooldown more, or my Pillar casts to lower the cooldown of my Nullify. The Helix System of skills is really cool, and while it seems binary at first, it allows for a lot of customization of play and adjusting your build to fit the needs of your team.

The Helix system allows for personal customization and adjusting to the level as you progress through it.

Teamed up with me for the mission I played were Phoebe, Caldarius, Boldur and Rath. Phoebe and Rath were close-quarter swashbucklers, using their blades and speed to close the distance. Boldur, a viking warrior, kept aggro on himself and knocked enemies away from the backline. Caldarius provided heavy fire support, as his robotic chassis contained firepower that could melt an entire wave of Varelsi in a single salvo. I was a damage-dealer, but Orendi’s kit allows for a lot of mobility. Since her knockback explosive, Nullify, can get you in and out of battle quickly, it allows for Orendi players to get in, drop big Pillars, and then Nullify out.

What I loved so much was that each character was able to contribute to the team without being relegated to designated roles. There was no defined trinity of DPS-tank-healer; instead, each Battleborn excelled in a field, and it was the intersection of those fields that created an effective team. It wasn’t picking into a meta, but more of an Avengers moment, where we were each a walking army, but together we were greater than the sum of our parts, able to surmount impossible odds and demolish legions in our wake.

After finally getting some hands-on time with Battleborn, I’m cautiously optimistic. It has all the ingredients for another quirky co-op shooter hit, and Gearbox is nailing the character design and interplay fantastically. I haven’t had a chance to try PvP yet, but as for the co-op PvE segments, I was antsy to go another round and try a new character the second my first session ended. There’s an infectious, endearing joy in this game, and definitely one to keep your eye on as the fall season slowly approaches.