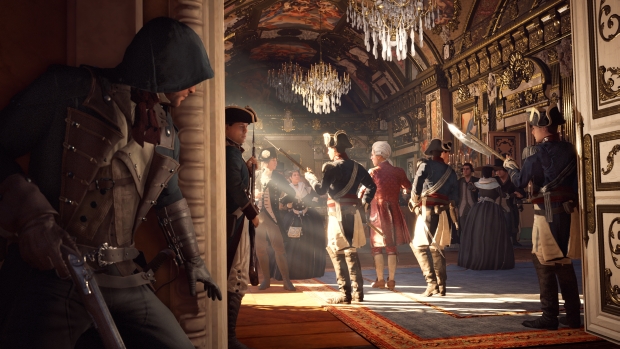 I’ve been a big fan of the Assassin’s Creed series for a while, but I felt like the game hit a high point with Assassin’s Creed IV: Black Flag. Setting players on the high seas, the game pulled away from the climbing roots of its predecessors. The game was released to critical acclaim, but in nearly every review (including our own) we cited that the game thankfully had less bugs than its predecessor. When we saw that Assassin’s Creed: Unity would return to land we all wondered what new features this fresh entry would have to offer.

During E3 we got an extended look at Assassin’s Creed Unity courtesy of Production Coordinator and Historical Researcher at Ubisoft Montreal, Maxime Durand. We saw the same demo presented during the Ubisoft Press Brief, but we saw it played live and with a lot more detail about what changes the team is bringing our way later this year.

Durand started off the demo talking about some of the impressive texture work the team has put into the game. Running on PCs roughly equivalent to a current-gen console, the game was showcasing a level of detail and draw distance unlike we’ve seen in any of the previous titles. But it’ll take more than fresh textures and extensive horizons to bring players back for another entry into the world of Assassin’s Creed.

One of the criticisms of late has been that the series has become too easy. Instant kills after a blocked attack turned the otherwise stealth-based assassination title into an action game. The team at Ubisoft Montreal want to take this title back to formula. As our new protagonist Arno Dorian descends on his foes, he uses his trademark wrist daggers to take out two French soldiers, but engaging a third reveals that enemies now have a health bar. The stronger guard was far more difficult to dispatch, and we couldn’t patiently wait and react like we’d done in the past. After a few careful cuts and a leaping knee to the face of our foe we were back on the path down the street.

As Durand stops to answer my litany of questions we paused for a moment to admire the impressive new cloth physics engine as Arno’s cape catches the wind. As we amble up the side of the building with all new Parkour animations, the wind picks up, sending Arno’s cape roiling around him as he ambled up the vertical surface. The normal mapping, the new lighting engine, the vast array of detail in every nook and cranny of the environment – I can’t overstate how impressive it really is.

It’s at this point that we learned the most impressive things you might not have figured out from the heavily-scripted stage demo. As we duck into a nearby building Durand guesstimates that roughly one out of every four buildings has a fully accessible interior. No longer do they simply serve as pass-through to evade pursuit, they can also contain side missions. These bits of content can be picked up and banked for later, letting you continue on your selected mission without having to quit to pick it up. The next bit of info really raised my eyebrows.

As I alluded to earlier, Assassin’s Creed has a stealth problem. Durand very excitedly informs us that the team has spent an incredible amount of the last three years of development time on giving us a true stealth game. They’ve added a dedicated crouch button, but they’ve also revamped the entire parkour engine to allow Arno to not only amble up and down buildings (though you can still do the crazy leaps from the top), but also to attack parkour from an angle. This has allowed the team to reduce the obvious stacked boxes and right-angle acrobatic setup elements, simply allowing the player to use any surface as their playground. This was demonstrated nicely as Durand hit an awesome 45 degree angle leap off of wall to catch an overhead lantern. In this new engine, the parkour system is closely tied to camera position. If you watched the demonstration and saw the new parkour descent system, you only got half the story. There are more animation options with all of these new angles than we’ve ever had on previous gen.

We’ve had Eagle Vision for a while now, but Unity is looking to use it in new ways. We use it to survey our surroundings and find there are several enemies on the second floor of a nearby house. It also revealed a chest with some hidden goodie inside. With the vast amount of purported interiors and over 100 side missions to tackle, this new semi-echolocation system will allow players to more carefully plan out a stealthy route rather than an all-out assault.

As we approached the end of the demonstration, Arno leapt to a nearby roof and surveyed the crowd. The surging masses easily filled the entire screen as they gathered for a guillotine execution. With Unity, they are able to push the on-screen characters to over 5000, all fully animated. Leaping to air-assassinate our target we see the demo close as three other assassins join us on the platform, triumphant in our kill.

The bit of demonstration that we saw was entirely single-player, but Durand informs us that there is nearly an entire game of side missions (somewhere around 40, rated in difficulty from one to five stars) that can be tackled as a team. These missions allow the team at Ubisoft to bounce around in the timeline without breaking the storyline, and all of these missions can also be completed by a single player. We only saw this in motion during the scripted press brief demo, but it is intriguing just the same.

There are a lot of unanswered questions for the October 28th-slated title, but I came away from the demonstration very impressed. The team has gone back to formula and come up with some gameplay-changing systems that could vastly alter every game after this. The new parkour engine, the revamped combat, and four-player cooperative action has me excited to explore Paris in 1789. Check out our interview with Maxime below for a quick look at the why we nominated this title for Best Sandbox Game of E3 2014.

Assassin’s Creed Unity is heading to Xbox One, PlayStation 4, and PC on October 28th.