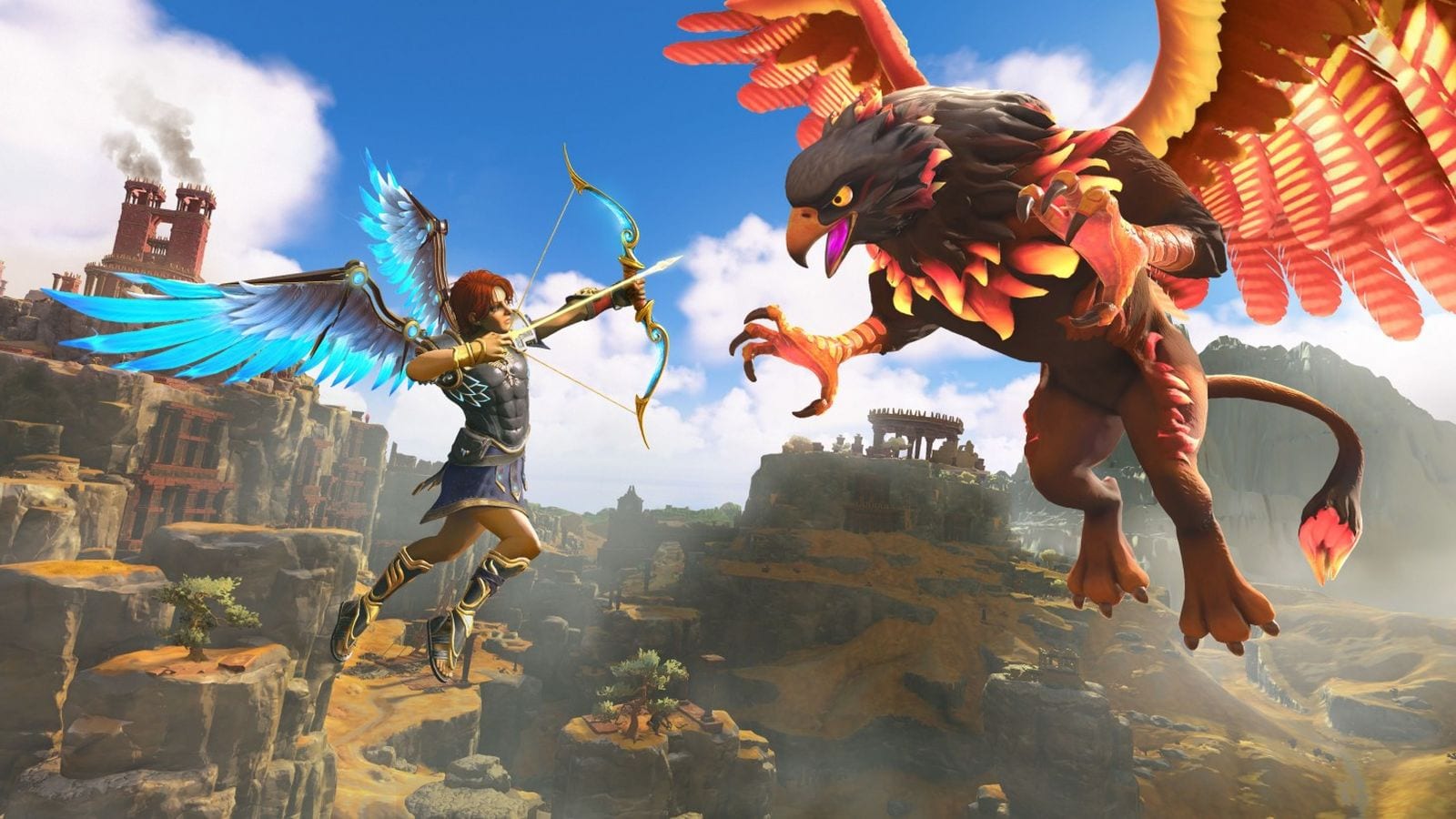 About a month ago you might recall that I got a sneak peek at Ubisoft’s freshly-renamed Immortals: Fenyx Rising. This early look covered a point roughly midway through the game, touching on the Forgelands — the land of the God Hephaestus, forgemaster of the Gods. This time around we’d get unfettered access to the game from the very beginning with no restrictions.

Before your story can begin, you’ll have to decide how your Fenyx will look. Male or female, you’ll choose from four heads for each sex, a dozen hair styles, a handful of tattoos or scars, eyebrows, facial hair choices, and ten colors for all of it before selecting a male or female voice. You are welcome to mix and match however you please — it’s your choice and your Fenyx. With your character created, the story begins. Since I made my Fenyx female, I’m going to use those pronouns throughout this preview.

To recap, Immortals: Fenyx Rising revolves around your character, Fenyx — a shieldbearer who washed up on the shores of the Golden Isle. With no combat experience whatsoever, you’ll set out on a rescue mission through the help of the Olympian Gods both large and small. Below we have the first 20 minutes of the game, giving you just enough of a setup to get you started without spoiling too much.

Fenyx, as a run-of-the-mill human, has zero special powers as she begins her journey. This quickly changes when she finds the fabled Sword of Achilles — one of several powerful artifacts the Gods will bestow upon Fenyx in her adventure. The Bow of Odysseus, the Hammer of Hephaestus, the Bracers of Heracles, and Axe of Atalanta (to name a few) will give Fenyx all the tools she needs to accomplish her lofty task, but don’t expect that you’ll be picking up a ton of gear and juggling through minor stat bumps through loot juggling. In the four hours I had with the game, I had found four helms, three chest pieces, and a handful of skins. Each of these gave a fresh cosmetic look to my character, while offering minor stat boosts like offering a 30% damage boost when my health is full, as an example. One of the things I loved best, however, is that if you like the look of a particular piece of gear, but don’t like the stats, you can assign that look to another armor or weapon. Clearly looking the part in a tale of mythical proportions is as important as accomplishing the task.

The primary antagonist of Fenyx Rising is Typhon — a beast imprisoned by Zeus that has broken free from his chains and intends to destroy the entire pantheon of Olympian Gods. To defeat and imprison the Gods, he has incapacitated them by stealing their essences. Fenyx will have to find and reunite these Gods with their “essence”. Beyond this guidance, however, the choices are entirely yours. You are free to explore any part of the islands, tackle each one in any order you wish, and fight any creature you might encounter. Granted, you might suffer the consequences of choice in that scenario, but if you are like me, you’ll happily fight that Minotaur multiple times until you eventually figure him out and take him down. The game doesn’t force you to come back later. Similarly, it doesn’t force you to tackle all of the Vaults of Tartaros. Other than the few that are guided by story elements, the 60+ Vaults are entirely optional. They all have devious puzzles and mythical rewards for solving them, but again — your Fenyx, your rules.

The primary progression elements for Fenyx lie in exploration. Finding and solving puzzles, defeating monsters, and exploring can yield equipment, fruit for creating and upgrading potions, coins of Charon to upgrade Fenyx’s godly powers, and more. Ambrosia can be turned into health upgrades, and Shards of Adamantium can be used to improve weapons. Even two months out, this felt like a natural progression system and not one that would require grinding to complete the game. Completionists out there will be happy to know here is a “Mastery” system after you’ve maxed everything out. Jumping ahead in my play session, I got to try out a “maxed out” version of Fenyx. You can get a good look at some of those adventures below — they are as spoiler-free as I can make them:

Near the end of my time with the game I managed to cross an important task off the list, reuniting a Goddess with her essence. Getting ready to celebrate my success, I suddenly found myself face to face with one of Typhon’s lieutenants. I don’t want to spoil any surprises, but by freeing this God, I had also unleashed a lieutenant. Talking with the developers, this thorn in my side will be showing up at inopportune times until I find his lair and shut him down for good. I can imagine that we’ll see similar corrupted sub-bosses as we reunite the other Gods with their crucial essence.

After four hours of hands-on time with Immortals Fenyx Rising I’m happy to report that it felt like a well-polished and highly entertaining game. The humor is genuinely funny, and the stylized world fit nicely with the fantastical Grecian myth stories they were telling. Better still, the Ubisoft team is tackling these stories in a new way, giving us a fresh perspective on these well-known myths and legends. There were worries when this game was revealed that it would be “Assassin’s Creed for Kids”, but that’d be selling this game short. Puzzles, verticality, open-world exploration, and coming together nicely to create something entirely new, and I’m excited to hear what you all think of it when you try it for yourself. Me? I’m hooked.

Immortals: Fenyx Rising is coming to Xbox One, Xbox Series X/S, PlayStation 4 and 5, Stadia, and PC on December 3rd, 2020, but you don’t have to wait that long to try it out for yourself. By the time you read this, you can try it out for yourself. Exclusively on Google Stadia, you can check out the demo for free — all you have to do is register for an account with a Gmail email address. Stay tuned for more on this game as we get more hands-on opportunities right here at GamingTrend.com