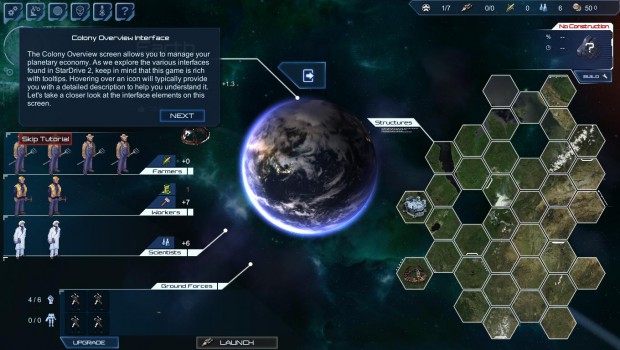 Having never played the original, I wasn’t entirely sure what to expect when I took to the helm of Zero Sum Games’ Stardrive 2. I was mostly just looking for a more satisfying space-combat strategy experience than Sid Meier’s Starships, with more graphical ambition than that of Spacecom. (I was also hoping to get away from space games with star somewhere in the title, but that’s obviously still a work in progress.)

Stardrive 2’s planetary interface may look like just the skin and bones of what you need, but as your empire grows, you’ll come to appreciate its streamlined design.

After about 100 turns and just over 20 hours with Stardrive 2, I have to say that I’ve had all my desires fulfilled, perhaps even more so than I wanted. Stardrive 2 is a deeply engaging RTS experience, boiling over with options and diversity. Its space combat and world building mechanics are rich enough to satisfy the obsessive-compulsive needs of RTS veterans, while its tutorial system and HUD layouts are well presented and functional for layman. This combination creates one of the most approachable strategy games of its kind; and most importantly, I had fun the entire time.

From the moment I started Stardrive 2, it was made very clear to me that the developers wanted to build a game that wanted you to play it, instead of just challenging you to figure out why it was worth playing. Nearly every icon or option on each of the title’s many HUDs offers a detailed description of its function with a brief hover of your cursor. The value of these descriptions was further empowered by the extremely well-tailored tutorial system which walked me through my first game, and was excellent at knowing when I needed a little more help and when it was overstaying its welcome. While it still took me some time before I was working Stardrive’s several dozen tools efficiently, it was good and functional to know I could find out exactly what I needed without scrolling through piles of text, or being forced to listen to five minutes of dialogue for ten seconds of info.

Stardrive 2 attempts to elevate its story beyond just the lore of it’s various species with brief and often comical interludes, which are entertaining without becoming a distraction.

Once the game started moving I was thrilled see all my favorite elements of RTS gaming present and accounted for, yet still unique. I still had my normal farming, building, research, and military units at the ready, but was shocked to see that each one had their own trees within trees were I could further customize their own value and function. The sheer volume of options beyond just the units themselves was impressive enough to be a game in their own right. This was taken to a whole new level with the starship design, which even had a tutorial itself.

Ship design can be the copy and paste work of seconds or an hours long labor of love depending on your tastes or battlefield experiences.

On the topic of Stardrive 2’s combat, there were a couple ways to approach it. You can either find trouble of your own in the campaign, or test your skills and wits in the arena mode, where you battle through various scenarios for rewards. Both of these options lead to extremely satisfying conflicts were I knew I’d be crying for mercy after the opening salvos or gnashing my teeth until the very end. Watching my massive cruisers lurch and lean for an optimum firing angle or drift helplessly when they’d suffered critical damage is something I always hope for when playing something like this, and even at this pre-release stage it was extremely satisfying.

The musical scores and staging of your galactic conflicts can be truly epic in scope, reminiscent of Ender’s Game.

The few concerns I had with Stardrive 2 however, began with the sense that during all my various game sessions I had doubts about the title’s ultimate sense of economic balance. BC (the in-game currency) was relatively hard to come by without significant sacrifice, even early in the game. Combined with the randomized mechanics for galaxy generation, it seemed pretty easy to get hosed by the deck regardless of difficulty settings or option selection. Few things are as frustrating in a strategy game as the sense you’ve wasted hours of your time constructing an empire that couldn’t step over an ant hill just because of reasons. There were a couple infrequent, but irritating interface bugs as well, such as my windows spontaneously overlapping each other in a way none of them would respond.

Each star system you encounter will have it’s own unique style, appearance, and planetary orbits. In combination with your choice of galactic geography, every map will be different and full of surprises.

From the time I spent with it, Stardrive 2 seems like it will be really engaging and fun for gamers who enjoy meticulous strategy and customization. I am confident that, considering the rest of this title’s prowess and attention to minutia, whatever imperfections I experienced will be anomalies by the time of the final release. But just like any game, it’s hard to say how anything will be or stay until it’s time to open your wallets. Gaming Trend looks forward for the chance to see what this game is all about once it’s vessel leaves the dock next week.