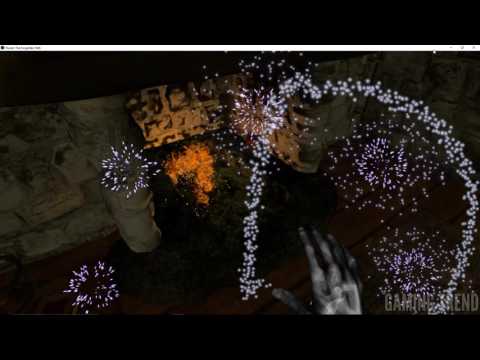 Stormborn Studio has something amazing on their hands.   If you’ve been riding this wave of VR you might feel a little worn out on early access and Kickstarter efforts, but I found an exception to the rule.  Runes: The Forgotten Path takes elements of some of the best VR games on the market, wraps it into a solid magic-based storyline, and turns us loose in a room scale experience that wildly exceeded my expectations, even at this early stage of development.

Runes: The Forgotten Path starts with you awakening as Leth, a wizard who has inexplicably decided to erase his past, his spells, and his memory.  Discovering why you’ve done this to yourself, how to escape the world of Oblivion where you are trapped, and how the Panopticon (an order of powerful wizards that regulate magic) might be involved sets the stage for your adventure.

There are two demos currently available on the Kickstarter page, but I have a build that expands on those dramatically, giving me a far better view of the world developer Stormborn Studio is creating.  The first level put me in an empty room with a little shelf filled with box-sized cubbies, a mirror, some alchemy equipment, and an oversized fireplace.  A nearby painting of a wizard from the Panopticon, presumably, gives me some direction on what to do first.  Uncovering a hidden book, I learned my first spell.

Telekinesis is awesome, and casting it is even better.  Click to see it in motion!

Casting a spell is executed by pressing the trackpad, and then making the appropriate gesture.  Telekinesis was done by going from center to 12 O’Clock, and then circling around to 6 O’Clock in one continuous motion.  With this spell I could grab previously unreachable objects and actuate levers far away.  This enabled me to further explore the room, finding boxes with various letters, a quill, a few more lore books, a pipe, and some other objects.

One of the things I’m enjoying most about Runes is that it is a world for you to explore.  It doesn’t hold your hand, and it respects the player’s intelligence.  I won’t ruin the puzzles, but they are intuitive, escalating in complexity as you learn new spells and skills, and focus on observation rather than obfuscation. To see what I mean, check out this capture of me discovering what Runes has to offer – behold 50 minutes of Runes: The Forgotten Path!

A lot of people, myself included, have trouble with movement in VR.  Runes combats this with a system they call 4th wall locomotion. Rather than the typical “fade to black and then reappear” method that most VR developers use, Stormborn wants to keep you in the action. You’ll see your character run in third person from where you are currently to where you aim to teleport, controlled by the trackpad on the Vive, warping you to the destination at the last minute and popping you back into first person view.  I was amazed that I experienced absolutely no nausea with Runes.  The new movement mechanic works perfectly;  even climbing ladders and moving laterally in the environment went without a hitch — truly, well done.

Runes isn’t just a rehash of games like Left Hand Path or Vanishing Realms — developer Stormborn Studio has a few new tricks up their sleeves.  With a heavy focus on natural motion and interactivity, there is little need for instructions.  Want to light a candle?  Use your fire spell, another candle, or the fireplace.  Want to blow it out?  Bring it close to your face and blow it out.  When you are being asked a question, you can nod yes or no to answer.  It’s clear that they don’t want to just do what everyone else is doing, instead focusing on how they might raise interactivity to a new level. Check out the intro for Runes: The Forgotten Path below:

If you are a fan of spellcasting adventures, or if you want to simply push the burgeoning VR industry forward, I can’t recommend Runes: The Forgotten Path enough.  From the multi-hour taste I’ve had, this is a game you need to have in your library.  Head on over to Kickstarter and help them build this amazing game.