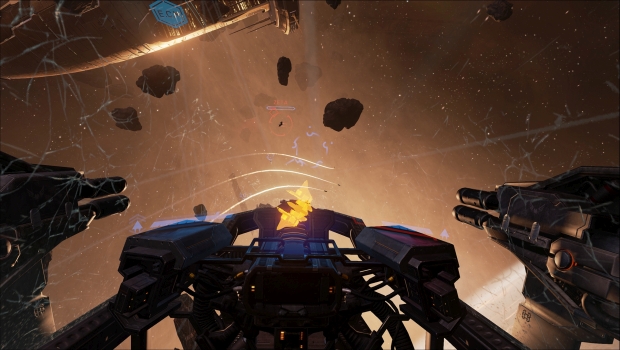 While waiting for my appointment to demo the Oculus Rift, I struck up a conversation with two guys nearby. They happened to be independent developers focusing on creating VR titles; I was a little taken aback, as I had never tried virtual reality and was optimistic, but skeptical. When I told them that day would be my first time trying any VR device, they both smiled and one said to me, and I quote:

“You’re about to lose your VR-ginity.”

Little did I know how on-the-nose that dev was, as I was about to have a gaming experience I wouldn’t have believed possible. I spent some time with the Oculus Rift Consumer Kit 1, and I can say with certainty that I’m now another of the devoted, anxiously awaiting my next chance to strap on a Rift.

The headset fit snugly, and the headphones attached were of a much better quality than I had anticipated. While audiophiles might seek to mod or change out the headphones for a higher quality, the base earmuffs performed above my expectations for packaged audio.

The Rift CV1 (Consumer Version 1) never felt front-heavy or difficult to move around in, and the little additions like foam edging around the base made it very comfortable to wear. I could easily see myself playing for long sessions with the Rift on, without complaint.

My demo was with EVE Valkyrie, the dogfighting simulation developed by CCP Games and based in the universe of EVE Online. The first thing I noticed was that the oft-mentioned “screen door effect” – seeing the fine lines between pixels due to close proximity with a screen-  was barely noticeable. If I strained hard to focus on individual pixels then I could note them, but as the demo progressed, I never noticed any screen-dooring.

Valkyrie started off slow, with a routine systems start-up for my starfighter. As the game progressed through an automated scene, it gave me some time to adjust to my surroundings. The cockpit was humming and buzzing, different lights and dashes blinking on and off all around me. I had full rotation of my head available, and while I was seated, I could still strain my head around to see everything.

The first moment I realized how immersive the Rift can be is when I looked down at my “hands.” I saw two rendered arms gripping joysticks, and for a brief moment, it was indistinguishable from my real hands. I quickly made the distinction in my head and resumed gawking at different angles and views, but for a moment, I lost myself in those arms. It was the first out-of-body Rift, but certainly not the last.

As the docking bay doors opened and my ship prepared to take flight, I could see off in the distance the open void of space. The calm AI voice that had been checking systems and listing off readings finally cleared me for launch, and I hurtled forward, careening down an iron tunnel until I splashed into the sea of space.

I was floored. I looked all around, out of the clear cockpit, gazing at the vastness of the vacuum surrounding my ship. CCP Games nailed the scenery, and the Rift framed it beautifully; monolithic carriers loomed nearby, individual starfighters screamed by me and the stars twinkled in the distance, reminding me of my scale in the universe.

This was the Rift – an experience that could not be accurately conveyed in any manner besides placing you in the pilot’s seat and letting you see with your own eyes.

After a short scripted segment that I completely ignored in favor of more gawking and ogling, enemy fighters warped into the area and my squad split off for some space dogfighting. The controls mapped to the Xbox One controller in my hands perfectly, which resolved my initial fears of input breaking immersion.

While a flight stick and throttle might have felt more natural, the Xbox controls fit well enough that I wasn’t thinking about which button to press or even about the fact I was using a controller – I was focused on tailing enemies, chasing the streaks of red light they left behind, leading the fire of my machine guns to whittle them down to scrap.

After a tense bout of space ballet, I heard a large weapon begin to power up. Before I could even attempt to locate the source, a beam of light lit up my view as a massive laser streaked across the screen. My view cut to black, and my demo had ended.

The Oculus rep congratulated me on finishing the demo, and after a few seconds removed my headset, but it was in those moments after the headset lifted that I realized the power of the Rift. I had to re-adjust, remind myself of where I was and what I was doing.

The Rift isn’t just difficult to convey to those who hadn’t demoed it before because of the vast difference in visual and aural input. To describe the Rift as playing a game might diminish its potential; the way it envelops you visually and aurally creates an experience, not a goal or challenge.

EVE Valkyrie on its own is a decent space dogfighting sim, but the Rift is not defined by one game or experience, but its potential. Right now, developers are only putting toes in the water of that potential ocean of experiences, and I’m excited almost to the tune of impatience to get another headset on and delve back in. Whether that future is realized or not, right now, the Oculus is a platform just waiting to be explored, and I’m dying to start exploring it.

We’ll continue to cover more VR and Rift-based news as we approach its projected release in early 2016.