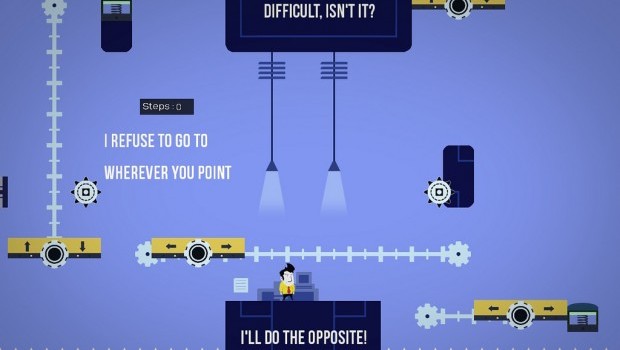 You wake up in an empty basement all alone. You have no memory of who you or how you got there. The only clue you have to your identity is the name “Klaus” written on your arm.

This is the introduction to narrative-driven platformer Klaus from La Cosa Entertainment. Players control the mysterious Klaus on a quest to discover who he is, all with a very somber, yet focused approach to storytelling. Perhaps most interesting about Klaus, though, is that every single concept in the game contributes to the larger narrative – checkpoints, characters, side quests and even the player all have a meaningful narrative purpose. As the quest to discover Klaus’ identity becomes deeper and more engrossing, some thought-provoking and clever puzzle designs arise, with each aspect affecting both the gameplay and the story.

Klaus’ adventure begins with him exploring the basement, and quickly picks up from there. The story is told via Klaus’ inner monologue that gets displayed as literal writing on the wall, helping to tell the narrative and convey Klaus’ fear and curiosity without ever pulling players out of the action.

Early on, players will meet K1, a hulking, brutish characters who oddly resembles Klaus and similarly has his own name written on his arm. While K1 is larger and less intelligent, it is quickly assumed that he and Klaus are in the same predicament, and so K1 joins Klaus on his quest.

Players are able to control both Klaus and K1, with the ability to cycle through them individually or control them as a pair. The two characters have distinct play styles that complement each other, but mastering when to use each character becomes key to progressing. Klaus is smaller and more nimble, and soon discovers that he is able to hack computers, while Klaus is a hulkish brute who can smash walls or throw Klaus to higher up areas. It may not seem like it at first, but even all of these attribute differences play into the larger story.

The gameplay demo jumps around to various chapters throughout the campaign, but during one early stage in Klaus’ adventure, he finds himself in an office where things begin to unravel. Klaus soon discovers that he is one of many failed clones of an original test subject, which helps explain why his memories are fuzzy, as well as why K1 looks strikingly similar despite his lumbering physique. In a surprising hybrid of story and gameplay, Klaus also learns that every time he has died so far in the game, that particular character actually dies; the return to a previous checkpoint is just another clone being created.

Further breaking the fourth wall, Klaus learns that he is just data inside a piece of software, giving explanation to his ability to hack computer terminals earlier in the game. You, the player, act as the QA tester In Klaus’ world, making the player an active participant in the happenings that unfold. This opens up unique gameplay elements when Klaus becomes aggravated with this discovery. In one mid-game level, Klaus begins to control himself, with the player able to control nearby walls and barricades in an attempt to stop Klaus from committing suicide. It’s a dark and very bizarre sequence, but engages players in a style that few games manage to do.

Along the way, Klaus will also discover hidden side quests that serve as memories of Klaus’ past. For example, in one early quest, Klaus must navigate a stage while only being able to move left. When he emerges from this level, it is revealed that the directional limitation was the game’s way of Klaus remembering that he is left handed. These side levels provided some of the most insightful and entertaining gameplay mechanics, such as one stage where Klaus’ dead bodies do not get removed from the screen and can be used as bridges to cross spike pits, or another where the player controls a moveable buzzsaw and has to complete the stage without killing any Klaus clones. These memories provide some of the most thought-provoking contributions to the narrative, and are among some of the most interesting moments I’ve seen of Klaus so far.

Klaus is shaping up to be one of the most unique games I have ever played. From a gameplay standpoint, it feels a lot like indie favorite Thomas Was Alone, with players simultaneously controlling various characters of different abilities. From a narrative standpoint, though, Klaus is unlike anything I’ve ever seen. Klaus’ quest is curious, existential, and self-aware, and La Cosa seems to have really nailed the gameplay concept that everything in the entire game is there for a greater purpose. The game also features multiple endings that can be unlocked depending on how many memories are found, so Klaus seems to have a ton of replay value where your second playthrough is likely to be looked upon with whole new meaning. This is one of the deepest, yet most bizarre, games I’ve experienced in a long time and I can’t wait to play through the whole game when it releases on PlayStation 4 and Vita this January.

For more on Klaus, as well as all of our PSX coverage, stay tuned to Gaming Trend.