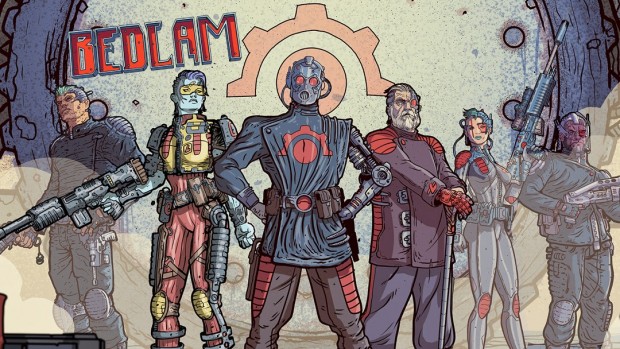 In the distant future, the world that we knew is in ruin. Overpopulation has caused a strain on resources, and civilization has crumbled. As one of the last remaining colonies, the people of Byzantine live in poverty, while the wanderers outside the city walls cannot be trusted. What remains of the population struggles to stay alive under harsh conditions, but life cannot continue this way much longer. The only hope of staying alive is to trek through the brutal wastelands in search of supplies.

Driven by a need to gather resources, Bedlam throws players out into the dangerous wasteland in hopes of traversing as far south as possible. Inspired by games like FTL and The Banner Saga, Bedlam is a roguelike strategy game where the post-apocalyptic theme drives the gameplay. Motivated by a quest to survive amidst dwindling supplies, it’s up to players to map their route through the wasteland, with a huge emphasis on resource management. Each landmark along the way comes with a varying level of risk and reward so players will need to strongly consider when a journey is worth the trouble. Every path has just as much potential to keep your caravan going for one more day as it does to cause an abrupt demise. Even with danger being so prevalent, players must keep a vigilant eye on fuel, while continuing to push further, even if one wrong move could be disastrous.

Thankfully, Bedlam’s presentation conveys a much more pleasing demeanor – despite the game’s bleak storyline and steep odds, it is all carried with tongue-in-cheek humor, not unlike Borderlands. Sure, there’s some tough moments and a challenging element of strategy, but Bedlam maintains a much more cheeky tone with its comedic dialogue and charming wit.

For starters, the visuals look fantastic. The art style is drawn to look like panels out of a comic book, with each character featuring bold outlines and bright, cartoonish colors. The appearance looks very 80’s too, as Bedlam’s punkish vibe could very well pass for being from that decade. It all feels like a Mad Max animated series, and all works wonderfully in keeping that bleak-yet-comical feel.

The game’s combat animations also work well to keep this tone. While long-distance troops fire off their weapons with a comic-style smoke cloud, the close-up brawlers have combat animations that are much more over-the-top. These fighters feature some vicious sequences where hard-hitting melees are accompanied by bone-crunching sound effects. One animation in particular even sees a giant hulking mutant spew green acid onto his opponents, with their skin melting off until only their skeleton remains. It’s all brutally violent, but comically so.

The game’s emphasis on strategy carries over into battles as well. Combat plays out like most tactical RPGs, where players manage their troops across a grid-like battlefield. However, in Bedlam, the player can move twice per turn, offering a fresh take on the strategy. While this blitz system works to the player’s advantage when it comes to strategizing their offensive strikes, defense becomes a thinking man’s game as the player is required to think two steps ahead of their opponent. It admittedly took some time to get the hang of it since it results in having to play far more defensively than I’m used to, but the level of strategy should provide some tense moments for those who decide to master the combat. It all plays out like a chess match, with those willing to invest their time and strategize likely to take away the most enjoyment.

Combat can also vary depending on the faction that you choose to play as. While I played as humans during my demo experience, other options also included mutants, cyborgs, and A.I. machines. Each faction has their own set of soldiers available to them, and each with their own strengths, weaknesses, and battle abilities. Finding which class works best for you will be part of the fun of exploring Bedlam, but it definitely feels like some will be more difficult to use than others.

During my brief demo, I managed to give Bedlam three attempts and each time I was able to get a little further than the last. While still nowhere near the end goal of the game, I found myself excited to jump back in and try new things that could keep me going just a little longer. That’s where Skyshine’s Bedlam really shines – each time you play, you apply what you learned from previous attempts while hoping to survive just a little longer. Ultimately, the strong element of strategy melds wonderfully with the cartoonish visuals and comical presentation. Skyshine’s Bedlam is shaping up to be addicting fun for newcomers, but those willing to really invest in the game are likely to get a lot of fun out of it.

Skyshine’s Bedlam is currently scheduled for a 2015 release. For more on Bedlam, as well as the rest of our E3 coverage, check back to Gaming Trend.