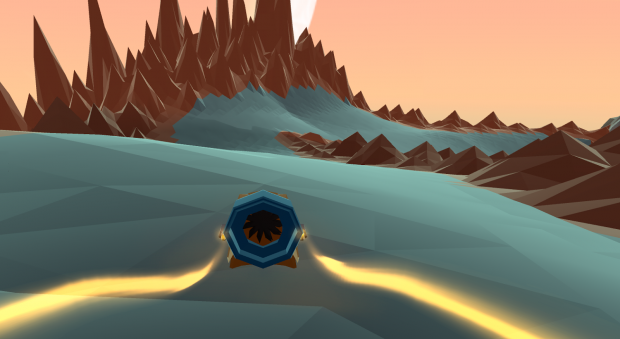 In SmuggleCraft, every race is slightly different. The steering, controls, and core mechanics all remain the same between sessions, but this hovercraft racer differentiates itself from others by being entirely procedurally generated, creating new racetracks every time you play. The results are quite impressive, and while there is still the possibility of oddly fitting pieces, after getting some hands-on time with SmuggleCraft’s multiplayer, I can attest that the game creates an experience that manages to be competitive and unique with each race.

SmuggleCraft achieves its unpredictable nature by using pre-built track segments that are selected randomly and linked together in each race. Over 150 track pieces have currently been created, with the developers hoping to have many more added by the time SmuggleCraft launches. Each piece also has a difficulty rating assigned to it, and players are able to set the difficulty of their race to increase the frequency of easier or harder segments. I admit to noticing certain segments show up multiple times in the handful of races that I played, but even when a piece of the track was familiar, never knowing what flows next makes races still feel fresh.

The controls are relatively simple and suit the game’s random nature well. Aside from basic steering and gas pedal controls, SmuggleCraft also features the ability to strafe using the L1 and R1 buttons. Strafing doesn’t affect your hovercraft’s angle like steering does, but creates a convenient way to narrowly avoid incoming obstacles in the track. It’s not something that tends to get used outside moments of split-second decision making, but it can prove to be a lifesaver and makes a great fit for the game’s on-the-fly movement.

Another level of complexity comes from managing each ship’s energy and damage gauges. Each ship is powered by energy that constantly depletes while the gas pedal is down. Blue orbs appear on the track and refill the energy gauge when acquired, giving racers a temporary speed boost. However, failing to acquire these orbs will cause your ship to run out of fuel and bring an abrupt end to the race, so keeping an eye out for them in the randomly generated tracks is crucial to victory.

Much like energy, there is also a limit to how much damage your ship can withstand. Health is not something that can be regained, so players need to beware of their sustained damage and play accordingly. In an interesting twist, races don’t end when one player is out of commission; it’s entirely possible to have races where all players are eliminated and no winner is declared.

My play session with SmuggleCraft was brief, but provided a great sample of how varied each race can feel. It may have some qualities of a straightforward racer, but the randomness of SmuggleCraft looks to shake up each play session and make it feel fresh. Our demo only consisted of two-player local multiplayer, but with developer Happy Badgers hoping to achieve four-player online matches, as well as a track builder mode, SmuggleCraft shows great potential to be entertaining and different every time you play. Look for it to launch in summer 2016.

For more on SmuggleCraft, as well as all of our PSX coverage, stay tuned to Gaming Trend.