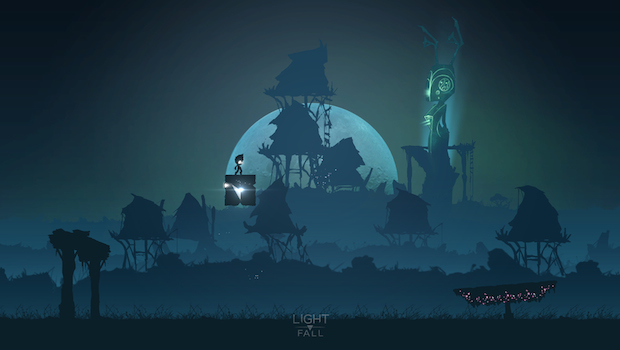 Jump, jump, platform, jump. I’m skipping my way across a massive ocean, barely hanging above the crest of the waves below, dodging swordfish and spikes as well as the deadly water. There’s no platform in sight, but it doesn’t matter — I simply make my own and keep moving.

Light Fall is built on the concept of creating a platformer where the player makes their own platforms. Able to summon them out of thin air, either in mid-air or placing them while firmly on the ground, the main gameplay of Light Fall revolves around you guiding your character, an amnesiac boy in a darkened world, through a run of obstacles using platforms of your own design.

The world of Light Fall is gorgeous in its own way, not bright or colorful, but instead using accents of dark and light to create a uniquely intriguing setting for the game. In the demo I played, I was seeking Animus the Wise, an old god of my people. For some reason, my character’s nation was gone, and I needed to find out why, avoiding the many dangers in the way.

While early on you can simply hop and wall jump over many of the hazards in each level, you’ll soon need to make use of your platforms to stay alive. You have three charges of platforms to work with, which only recharge once you touch the ground again. Platforms can either be moved and placed, or quickly spawned beneath or to the side of you.

In some cases, this meant carefully parking a platform in front of a laser so I could pass by it. In others, it meant quickly tapping the A button to pop a platform up beneath me before I landed dead-on a pile of spikes. Having the jump button and platform-spawning button be the same is an odd adjustment at first, but once I had kicked some bad habits, I was smoothly zooming across vast expanses with perfect jumps of my own design.

The speed of Light Fall is especially interesting, as you quickly reach a fast pace and have to start thinking on your feet with platforms. At one point in my demo, I was in a sort-of escape sequence, dodging falling rocks and rising spikes while staying ahead of the edge of the screen. I had to run while constantly thinking ahead — where do I want my platforms, when should I spawn them, when do I need to touch the ground to refill my charges.

In a later level, I had the opposite experience: a slow, careful leap across the sea, using tiny bits of mechanical buoys to refill charges as I tried to stay above water. I didn’t have to hit top speed, but I had to maximize the distance I got with every jump. With only three platforms to work with, every bit mattered in trying to make it to the next bit of land.

My experience with Light Fall was wholly intriguing, and it was one of the better games I saw on the show floor at PAX South. It’s an unassuming platformer, but the mechanic of platform creation mixed with the unique art style and presentation makes for one of the most promising packages in the indie area. Light Fall has a very high probability of being the next big indie platformer to blame hair loss and broken controllers on, in all the right ways.

Light Fall will be released for PC and Mac, with the date to be determined.