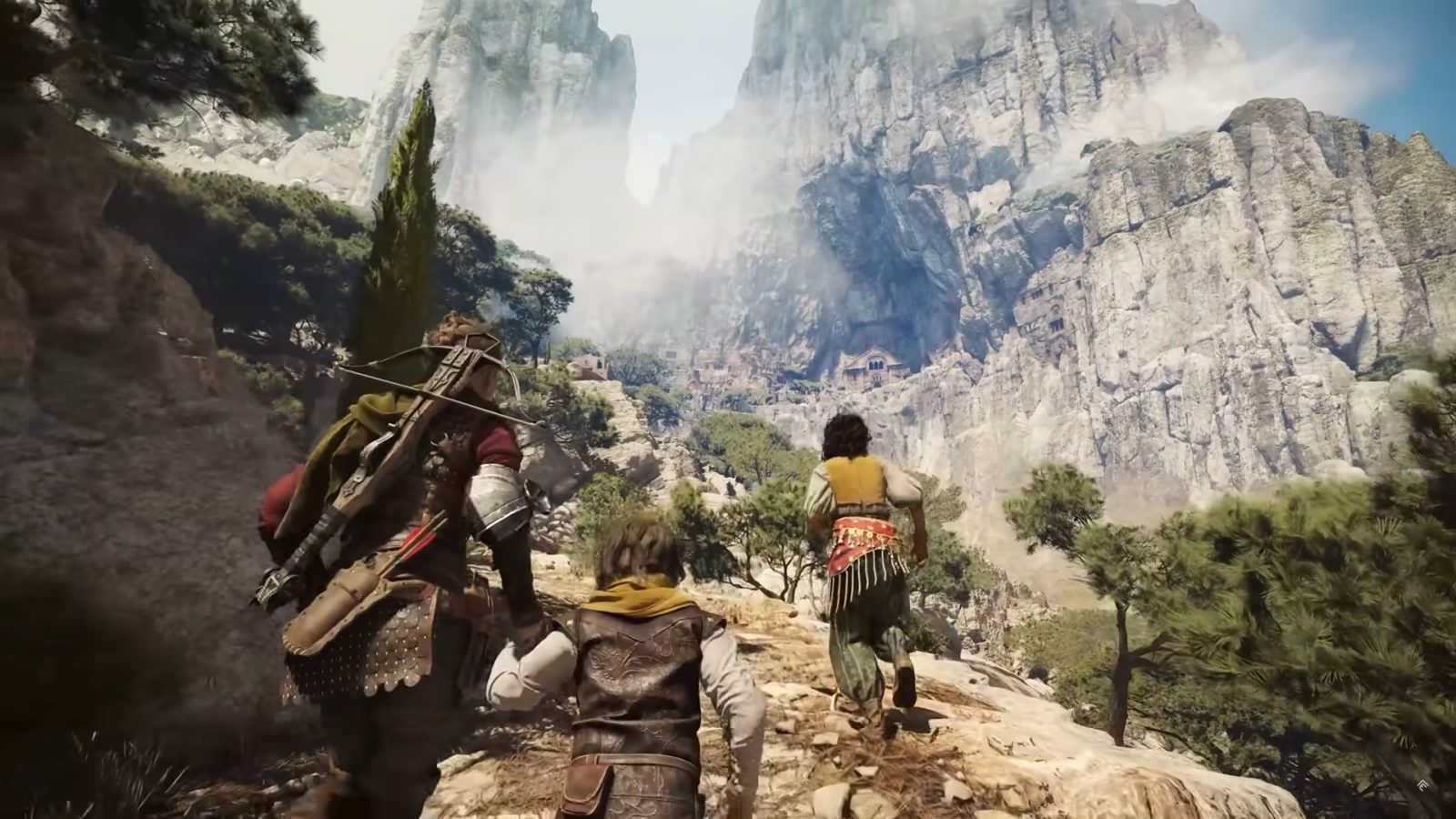 I remember when the tale of a plague riveted all of us gamers. And no, I’m not talking about 2020. A Plague Tale: Innocence launched in May of 2019 to incredible reviews (including ours), leading everyone to talk about the coming out party of Asobo Studio, the developer behind it and many other games that have been somewhat underrated, like Toy Story 3 and Recore. When Requiem was announced back in 2021, we all salivated at the prospects. Could Asobo somehow one up themselves with the sequel to a game so critically acclaimed? In my short hands on preview with the game last week, that possibility seems much closer to a reality.

From the opening of said preview, you’re struck by the density of what Asobo has put together. While I don’t remember a lot of what I played from Innocence (one I need to go back and finish), I do remember how astounding the visuals were. The team has spared no expense in Requiem, with the forest environment you start in a thing of absolute beauty. If the demo was just showing how great the game looks, that would be enough, taking you through several different areas that really showcase what Asobo has managed to build. We’ll talk more about the places you’ll go at a later date, but let it be said I’m floored that something that is technically an indie game looks better than almost anything out there right now. Requiem is breathtakingly gorgeous, and that feels like an understatement.

I used the word density earlier, and that applies not just to how pretty everything is, but to a world that appears full and alive. Innocence was no slouch, but the moment you walk into the open meadow and see the horizon, or walk down to the beach in a later section, it’s clear the scale Asobo is going for. There is tons of foliage, leaves that crunch underfoot, bees that flitter between flowers. Requiem is obviously out to immerse you in their creation, and it all works together to do that. Besides that, walking into an encampment early on in the preview showed a full gathering of people. It wasn’t just NPCs there for the sake of NPCs either, they were doing the different things you’d do as a member of the camp. I even heard background chatter that felt organic, along with someone saying hello as I passed. These things can be half done in plenty of video games, but it feels real in A Plague Tale: Requiem. 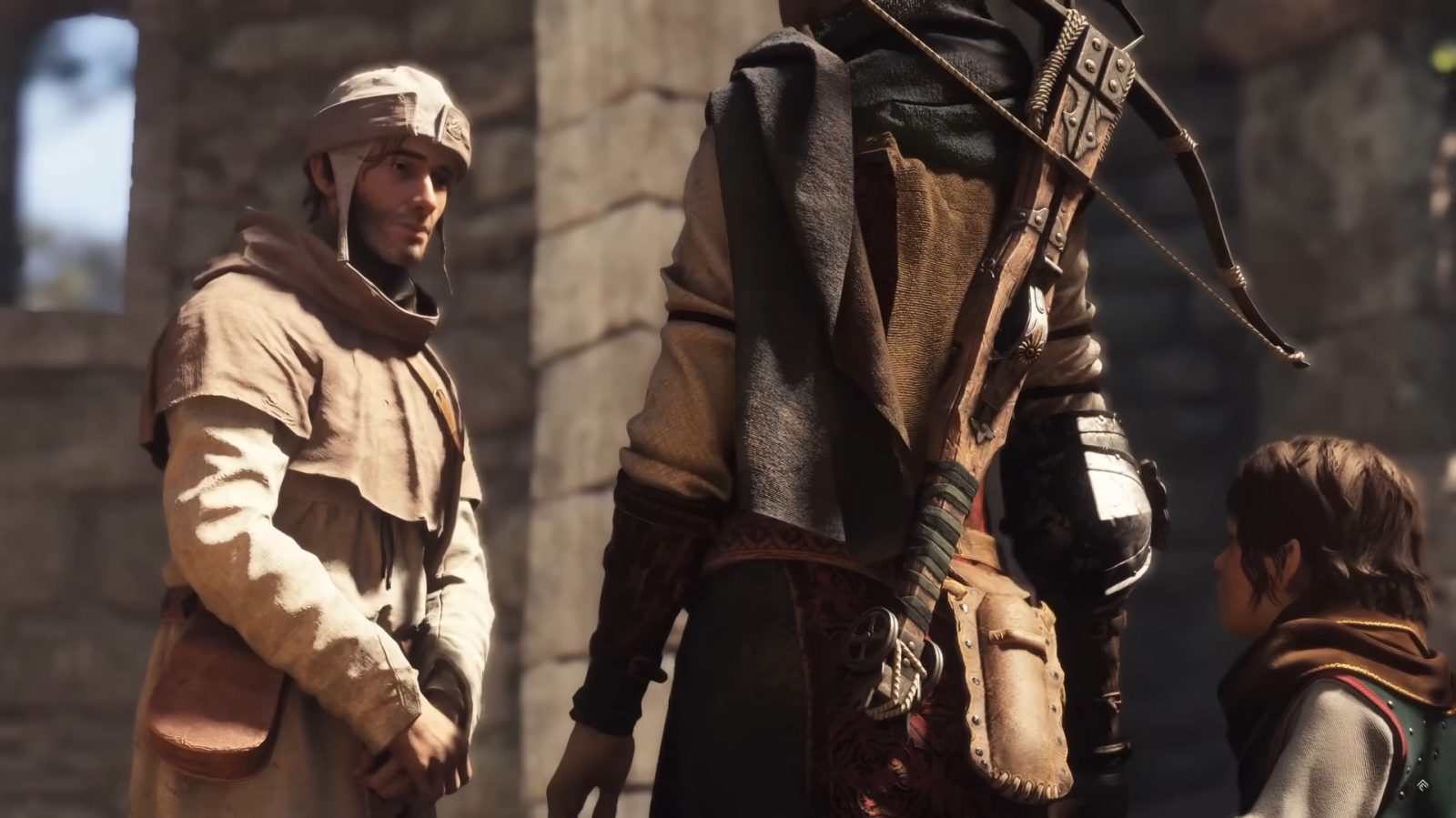 Requiem is going to obviously blow plenty of people’s minds visually, but the gameplay seems to be very tight as well. Once Amica and Hugo (the main characters) make their way into the encampment they find soldiers searching for them. It makes sense, as it seems in a previous mission Amicia has killed quite a few of them. This leads into the stealth you’re probably familiar with if you’ve played Innocence.

If you’ve never played one before, A Plague Tale is a game where sneaking past enemies is your best friend. It’s been a while since I’ve played a stealth game, but I had to become much more aware of both my surroundings and the available resources at my disposal. Your trusty sling is definitely still here, but with plenty of soldiers having on helmets you can’t just 1v1 them. Using a combination of killing some and leaving others is generally going to be the play. Throwing rocks to make distractions, hiding in the video game trope “high grass”, and then utilizing your paltry supply of crossbow bolts or fire pots to create pathways will get you to the end unscathed. Given Amicia’s slow movement with holding Hugo’s hand in guiding him along, moving too quickly isn’t the play. It turns each encounter into an open-ended stealth puzzle, with you trying to figure out what way is best. Even when I kept getting caught and killed, it simply motivated me to try again, but with a different tactic or taking a different direction. These moments in the preview were pretty large too, meaning you can take an entirely different path to the other side of a place than I do. 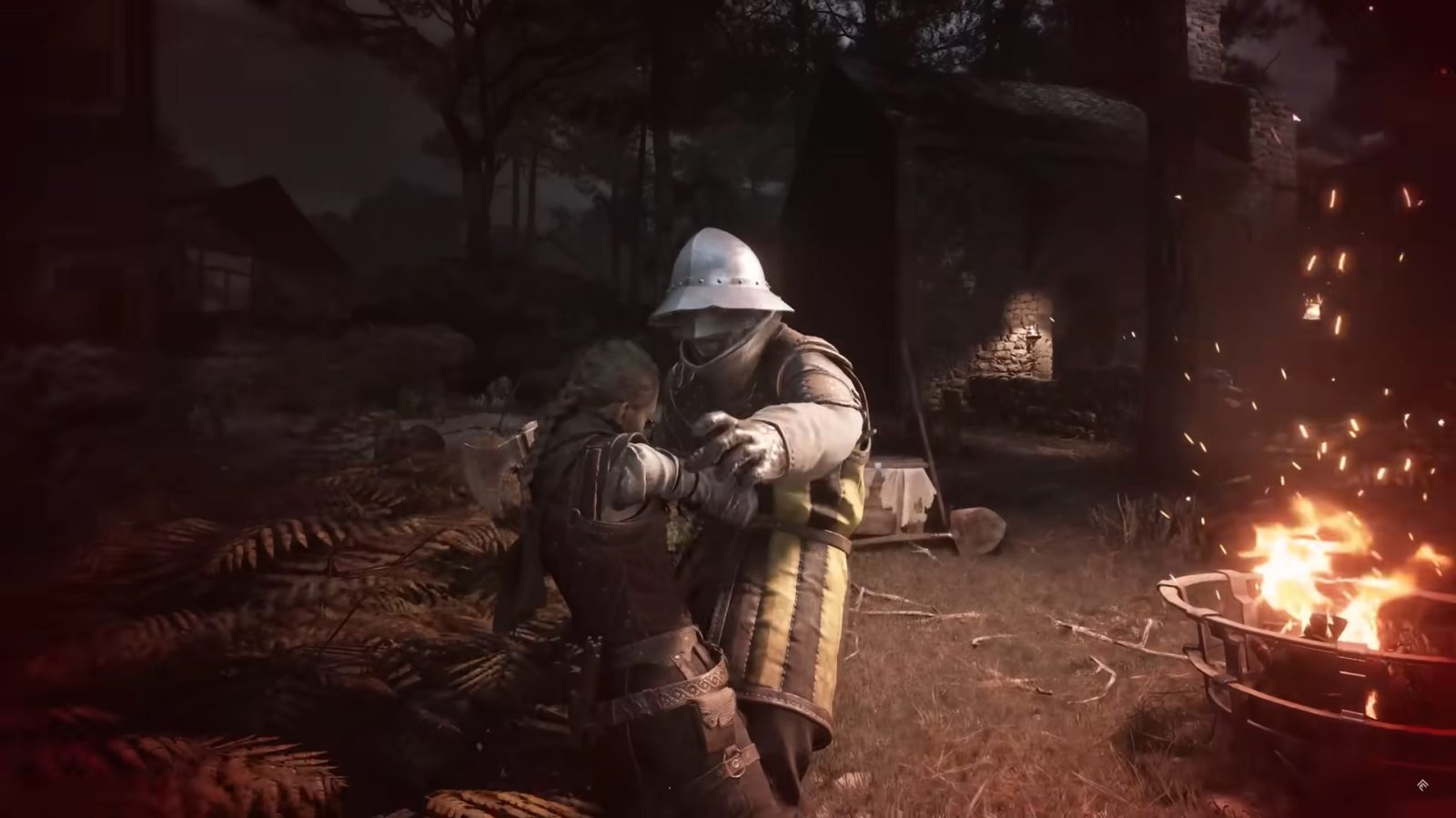 While plenty of things will be familiar to you from Innocence, the rain-soaked beach where you’re trying to get past a bunch of henchmen to reach a ship takes a different turn with the combat. One of the characters you meet along the way is a soldier, Arnaud, who needs your help in exchange for his. During this mission you’re able to use his skills, pointing him at who to fight. This adds another layer of strategy to what you’re doing, using Arnaud to distract someone in order to move past, or to lay waste to a group. For instance, I had three foes that I had a tough time getting past, and by using Arnaud, then rotating behind them to get one attacked by rats and knocking the armor off another (like how you did in Innocence), I was able to keep Arnaud alive (he can die eventually when outnumbered) and walk away unharmed. It actually makes Amicia somewhat deadly, able to take the more vicious option more often.

Of course, with us talking about A Plague Tale, you’re going to be curious on how everything is going with our favorite disease-riddled rodents. They are as dangerous as ever, and even though Hugo is tied to them (if you’ve seen the most recent gameplay trailer you’ll see he can even control them for a time), they’ll not waste a chance to chew up Amicia. Just like Innocence, they are a puzzle in and of themselves, and our preview took us through plenty of them. Using Hugo, you can use them as sonar to pinpoint enemies, and eventually control swarms of them to attack enemies, which is too much fun to do. Fire is a counter to them, and that will work to your advantage in getting through them, and also to your detriment when finding enemies with lanterns. As dark as it sounds though, there’s nothing more satisfying than knocking a guard’s lamp out of his hands, and watching him panic as the rats come. These creatures are also incredibly dense on screen, with Asobo being able to render hundreds of thousands of rats due to leaving last-gen behind. When you see what happens with these hordes on screen, it’s a sight to behold. 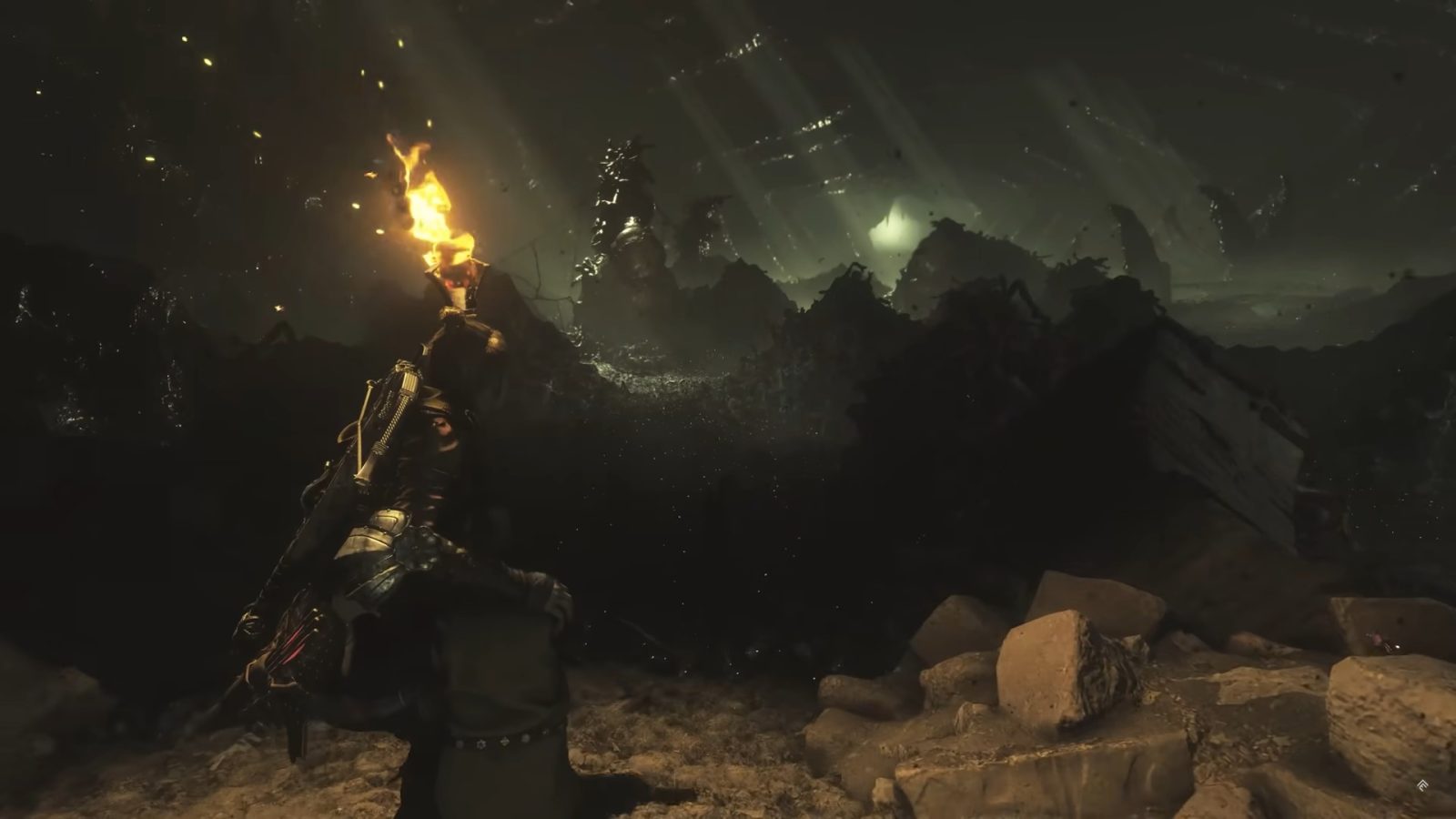 There is so much more we could talk about with this one; the different crafting and tools you’ll be able to use, the story reveals throughout our two levels, or the new characters that make up what looks to be a stellar cast for the game. But you’ll just have to wait for now. What I leave you with is this, don’t sleep on A Plague Tale: Requiem when it launches in a packed October on the 18th. It might not be as unheralded as its predecessor, but it might just end up one of the best games of 2022.