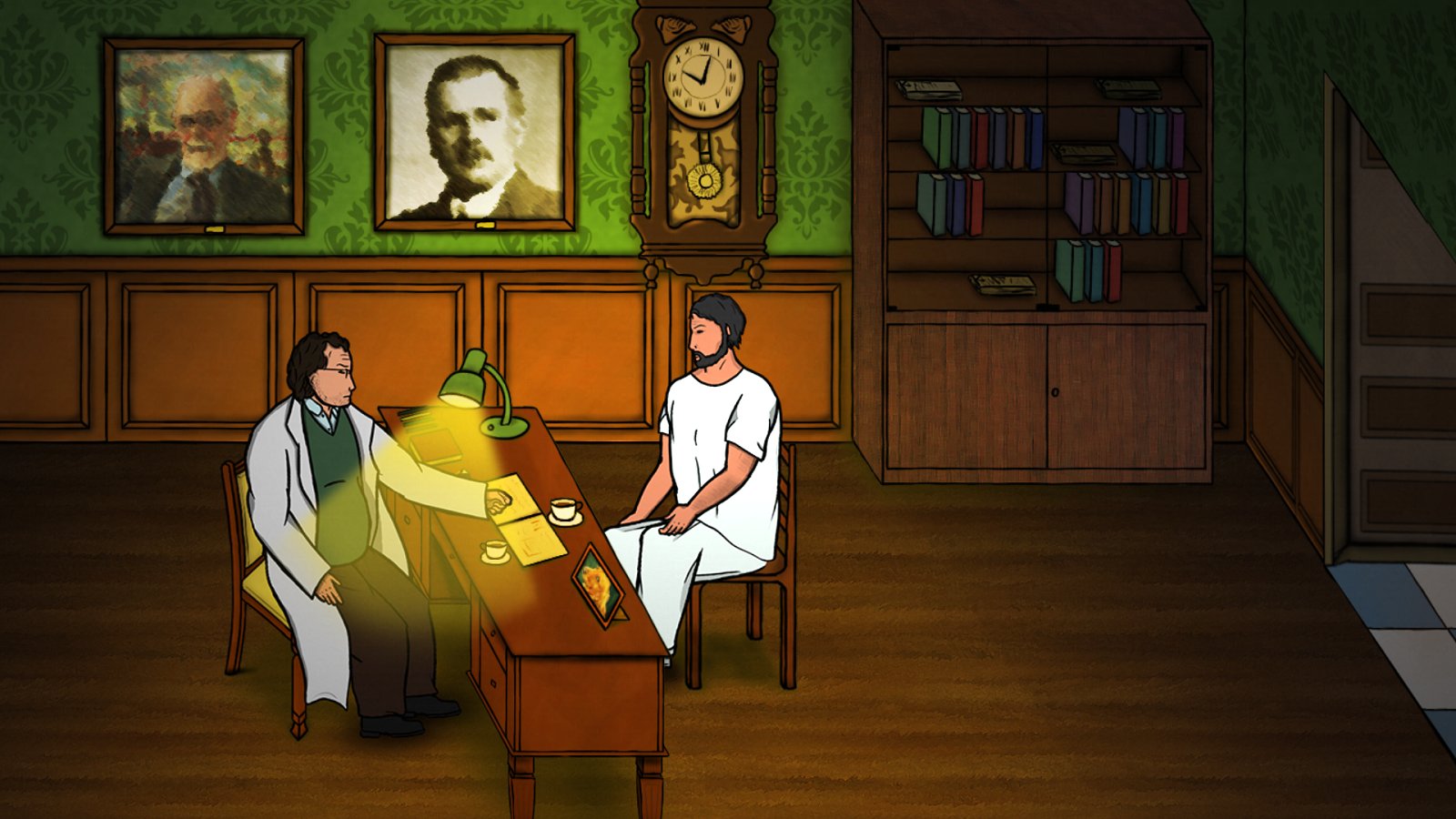 Carlos keeps a tight grip on his pistol—his only lifeline in a country crumbling under the weight of war. He can hear it all: The roar of enemy machine guns tearing through the freshly emptied husks of his fallen comrades. A thousand sets of steel-toed boots advancing on his position from all sides, coming to admire their handiwork and to pick their fresh kills clean. He won’t let those bloody-beaked vultures defile the corpses of his brothers in arms. He can sense their unrest, like hundreds of tiny whispers telling him what he needs to do. One quick weapons check later and he’s charging straight at the nearest soldier, the voices cheering him on.

Then, his eyes open. He’s greeted by two members of the hospital staff and, to his surprise, hundreds of tiny whispers, telling him what he needs to do.

The story of Carlos is an interesting one indeed. His participation in the Cuban Revolution has earned him his own room in a dingy, old mental hospital, where he spends every moment—awake or asleep—battling with his PTSD and oncoming schizophrenia. The duo that make up Russian indie studio, Tomato Fantasy, have their work cut out for them if they want to even come close to creating the experience that they’ve tried to illustrate. Half the game is complete and available to play if you’re willing to buy into its early access, with the second half to arrive in January of next year. If you’ve not yet been convinced, then a demo is also available for you to take the game out on a test run.

I’ll tell you one thing: I’m definitely not convinced. While Double sells itself as a memorable psychological thriller filled with twists and turns, it’s currently anything but. Carlos is surely being put through the ringer, but the player? The player is subjected to a completely different type of horror. A more accurate representation of the player experience would be:

The player watches Carlos get out of his dusty bed. They click through some lines of dialogue that haven’t been localized all that well. Not a problem, really. Oh, but Carlos is shaken up; the nightmares about his dead friend, his wife, the war, the doctor—it’s all too much. For the player, it’s the start of another gameplay-deficient segment in a sea of lackluster segments. After some point-and-click fun it’s time to watch Carlos slowly proceed down the hallway to his daily checkup. Now the player is at the doctor’s office, answering questions based on the nightmare Carlos just experienced. Whether the player chooses correctly or not doesn’t really matter. In the end, the game has the final say.

Now it’s time for bed again. Clunky doesn’t even begin to define what comes next. The game becomes a run-and-gun shooter without much running or gunning. Controls feel unresponsive, character models are buggy, the sounds and animations are barely serviceable, on top of a host of other issues that reveal how unpolished this game really is. The most interesting thing that the game introduces is a meter that tracks lucidity, which essentially acts as a timer, the player’s health, and ability meter all at once. In this nightmare world, Carlos can dash forward to eviscerate the same enemies over and over without much effort. There aren’t any new weapons to spice up the shooting, few new enemy types and obstacles, and is definitely lacking fresh environments to tackle.

The static is intentional. I don’t know about the rest, though.

At the core of the game, according to them, is a mechanic that expects the player to memorize key details found in the nightmares. This includes dates, images, posters, and more. I know what you’re thinking, this is far too ambitious for a game that’s already struggling to juggle so many other mechanics. And you’d be right. Expecting players to memorize random bits of information, or to even care about doing so in the first place, is a task this game is currently too ill-equipped for. The story of Carlos is the hook that draws players in, but everything else pushes them away.

However, I can’t give this game anymore flak than that. When you look closely, this is passion project with a surprising amount of attention to detail, albeit in all the wrong places. During Carlos’ first (conscious) day at the hospital, you meet a character who mentions that his finger was ripped off by another patient. Sure enough, the man’s got a missing finger if you focus your eye enough to see. Small references and callbacks, visual additions that add a bit of flavor to the experience, and clever ideas do find their way into the one-and-a-half hour first half. The warm guitar tunes are also a lovely touch that add some much needed character to the game.

For now, Double is a game you can safely ignore. The premise alone could persuade a few potential players, but it doesn’t take much time with the game to understand why jumping on board too early is a mistake. But I, for one, will choose to stay optimistic.

Gaming Trend will be sure to give the game another looksee come full release, so stay tuned for that early next year.