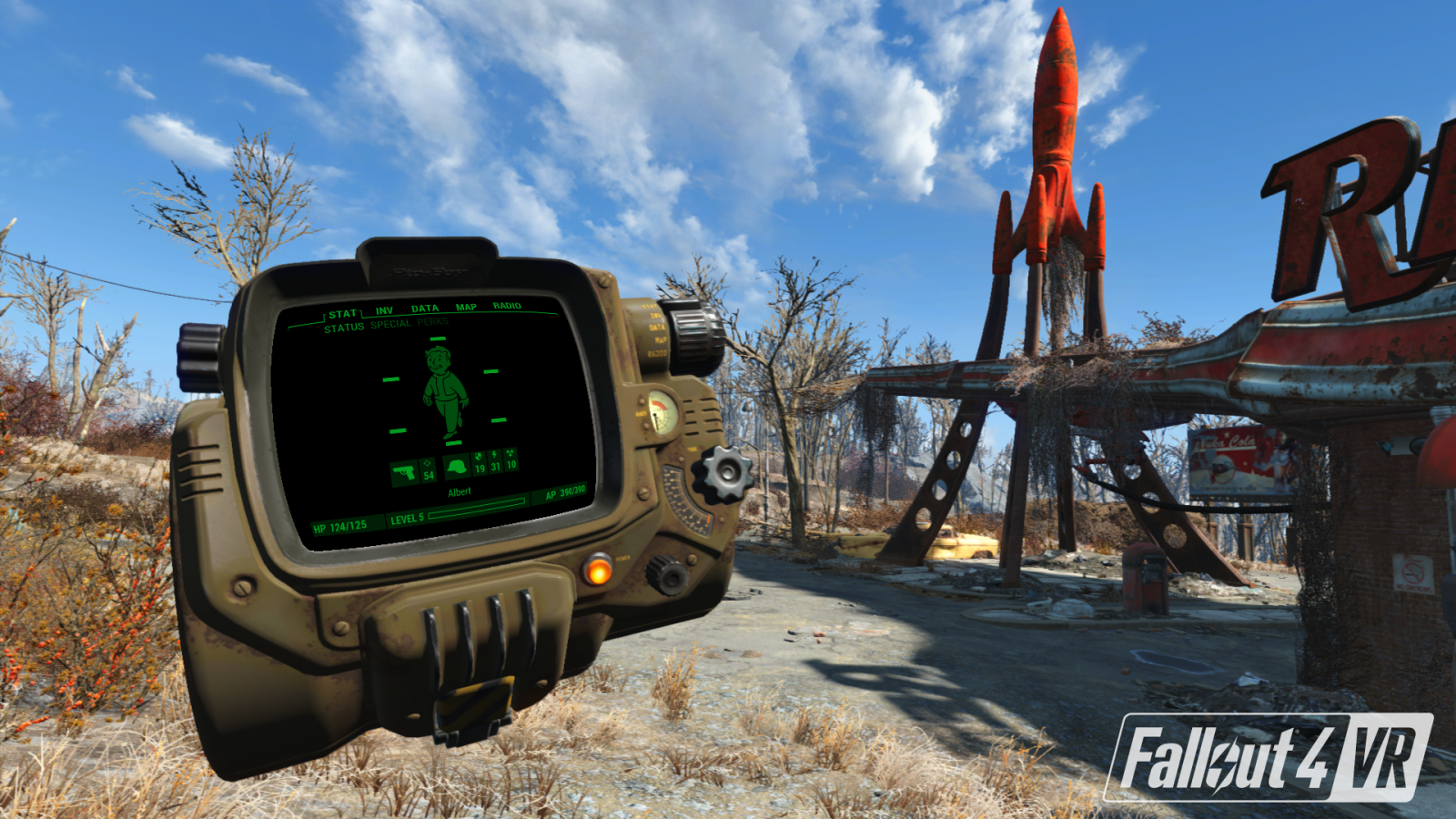 The world of Fallout has never felt more real, and has never held more bleak beauty, than from within a VR visor

Slipping on a visor, I find myself outside of an abandoned and broken down building: stylized support beams hold up a long overhang, rising up beneath a red rocket. Looking down, I find a gun in my hand and a very large dog at my side. The landscape is barren, with a hill covered in scrub brush rising to my left. The dog starts and growls, and while the logical part of my brain knows it’s doing so to help me, deep-rooted instincts, such as a fear of dogs, can be just as strong in virtual reality as they are in real life. My hand jerks up in reaction to the large animal’s sound, my fingers curl out of instinct, gunfire rings in my ears. Dogmeat lies dead at my feet; friendly fire is a real thing in Fallout VR. RIP, Dogmeat.

Confounded by what just occurred, I begin poking my way through the controls via the Vive wands. Lifting my left arm allows me to consult my Pip-Boy, which is conveniently attached to my left wrist, and dragging my thumb across the right disk allows me to scan through a veritable arsenal of weapons at my disposal. I’m so engrossed in the collection of deadly tools at my fingertips, and am distinctly lacking in a dog to alert me of danger, that I don’t notice the gaggle of approaching ghouls until one is literally right in front of me.

Barking out a sound of surprise, I drop my menu and pull the trigger… which does nothing, since I came out of the menu screen holding a baseball bat. I waste little time in embracing my inner Negan and pummel the nearest zombie-like creature to death, fumbling clumsily with the controls as I try desperately to switch to a projectile weapon so I can dispatch the remaining undead more safely. Panic makes you just as clumsy in VR as it does in real life, and things aren’t going so well. The ghouls are hideous, and they get right up in your face if you don’t do away with them quickly enough. Far from swinging for the fences, I’m slashing, rather like with a sword, then pausing to fumble with my menu, only to drop the menu as soon as I take a hit. It looks like the end for this fallout girl.

Then, like the life-saving voice of an angel, someone outside the visor shouts over the sounds of battle, “Press the button above the circle pad!” Clinging to hope, I smash my thumb onto the small button, and the world goes green as I activated my Vault-Tech Assisted Targeting System, or V.A.T.S. Time slows. I can breathe. Most importantly: I can switch weapons.

Combat has been reimagined for Fallout 4 VR

Blipping in and out of slowed-down time, I become a ghoul killing machine. Using the left circle pad, I teleport across the map, using the industry standard fishing-line tool to select where I want to move. Within stasis, I can finally see the brilliantly simple yet informative aiming mechanics of the game. Point your weapon and you see the blast pattern. Aiming at a foe will highlight the area you’ll be hitting, allowing you to perfect your shot. Within the V.A.T.S. stasis, it’s all easy. Headshot, headshot, shoot ’em in the knees just for fun, headshot. Battle over, slip back into regular time.

Hideous collections of radiation distorted flesh dispatched, I wandered towards the hill, one quick teleport at at time, following a dirt road. I’m quickly descended upon by a small swarm of stingwings, Fallout’s brand of killer, over-sized dragonflies. Shotgun in hand I slip in and out of time, trying to not let the bugs surround me, more out of a survival instinct than any kind of gaming strategy, and take aim at their compound eyes, hoping to do as much damage as quickly as possible. Pause time, shoot, teleport behind them. Start time up again to make them turn towards me, shoot, teleport to one side, fire again. They drop like flies, pun intended.

Feeling as if I need to brush bits of charred insect legs off my body, I descend a ridge to find a virtual treasure of the post-apocalyptic world waiting for me: Standing alone in the middle of a muddy crossroads is a set of pristine power armor. Empowered by the increased survivability of my newly donned armor, I switch weapons yet again and prepare myself to take on the post-apocalypse world… except my time with the Fallout 4 VR demo is over, and I have to shed not just the power armor, but also the Vive headset, and return to the thankfully less radiation-soaked real world.

Fallout 4 VR was an amazing experience, even if my time with it was rather brief. The controls and combat systems, which have been redesigned to fit the VR experience, are easy to master, and the very nature of VR makes the world world feel bigger, and encounters with giant, swarming insects and radioactive ghouls that much more intense. The world of Fallout has never felt more real, and has never held more bleak beauty, than from within a VR visor. Fallout 4 VR is set to give fans a familiar, yet entirely new experience when it come to the Vive on December 12th. You can learn more about it at by checking out the Fallout 4 VR page on the Steam Store.