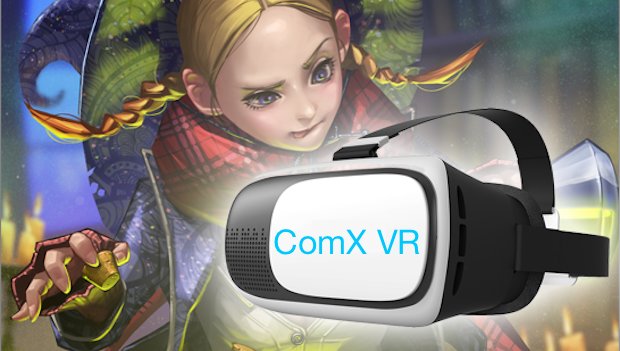 EigoMANGA is hoping to bring the world of virtual reality to a whole new audience: Comic and manga readers with its new ComX VR reader. I got to visit the eigoMANGA booth at Anime Expo and experience the world of VR comics firsthand, with publisher Austin Osueke as my guide. The idea is simple: You purchase comics on your phone via the comic app, and with the aid of any inexpensive VR visor, you’ll be able to read your comics in an expansive VR environment, rather than being confined to the resolution of your cellphone.

Slipping on the visor, I found myself in a vast, empty space which resembled a warehouse. On one side, a comic book page stood imposing, towering over me like a building. The interface is simple and clean and is e tirely hands-free, controlled by where you look.“Next page” and “back a page” are clearly marked to the right and left of the current page, respectively, and the zoom feature hovers over the top left of the page, like a tab. You can move the page or zoom in by simply staring at the desired option for a few moments. Purchases are made through your phone, outside of the VR environment, though readers will have access to their library within the VR environment.

It’s not for VR masters, it’s an introduction. It hooks up to your phone, you can use any $20 visor and start using virtual reality.” -Osueke

ComX VR is a simple comic reader, no bells and whistles, and no animated panels or VR features within the comics themselves. The app feels solid and easy enough to navigate. It may feel a little bare-bones if you’re used to the lush lobbies and features of the Vive, but it’s simple to use and seems to have all the features you’d really need. All purchases will be stored in the cloud, so readers can save space on their mobile devices by deleting and redownloading titles at will.

While the ComX VR app has not launched yet, you can check out the trailer video on the eigoMANGA facebook page. The app will focus on the current library of eigoMANGA comics, but there are plans to expand the selection. There is not currently a release date for the app, but those interested in having their comics appear on the platform can reach out to Osueke through the eigoMANGA website.