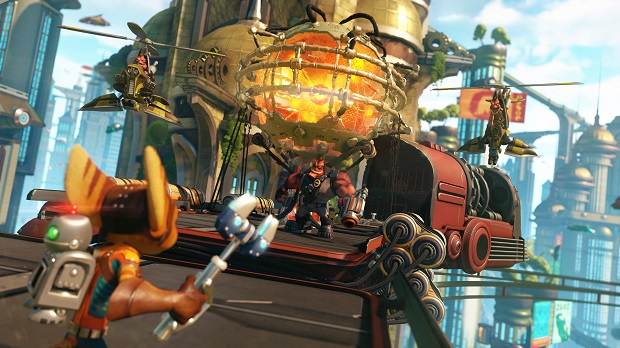 When I played Insomniac’s reimagining/remake/whatever you’d like to call it of the original Ratchet & Clank, I couldn’t help but be taken back to the feeling of playing and watching the original PlayStation 2 trilogy. However, in bringing Ratchet down to its basics, I did find myself feeling a little empty after my time with the game at this year’s E3.

First off, this remake/non-remake is absolutely stunning to look at. Insomniac has recreated the world of Ratchet & Clank into something that is nearing Pixar levels of quality. It’s vibrant, colorful, and evokes the same feeling the original game did over a decade ago.

But while the game has received an incredible visual overhaul, it doesn’t feel like Ratchet has been successfully brought into the current generation mechanically.

Those who have played Ratchet will know what to expect when it comes to gameplay here, with Ratchet and Clank having a huge arsenal of destructive, sometimes gimmicky and humorous weapons. The destruction and mayhem has never looked better, but what I played just felt simple and straightforward compared to most modern day action games, and the platforming segments felt just as dated and undemanding. Enemies feel like fodder meant only to act as test dummies for Ratchet’s expansive set of weapons, with little in the way of challenge, or any real need for skill.

An interaction Ratchet had during a boss segment showed that the series is still full of humor (even if what was here felt a bit kid-friendly than the series is typically known for), but the actual fight that went down was completely devoid of strategy and was just a matter of memorizing patterns.

I don’t know that I can fault Ratchet & Clank for being as simple as it was on the PlayStation 2, but it does leave me wondering if what Ratchet & Clank needed wasn’t a remake, but a reboot with a new set of rules and challenges. What I played was certainly fun, and will fill the Ratchet-sized void that fans are missing on the PS4 right now, but I hope that when the game comes out next year that there’s a bit more to it than there appears to be on the surface.

Ratchet & Clank is coming to PlayStation 4 in the spring of next year.