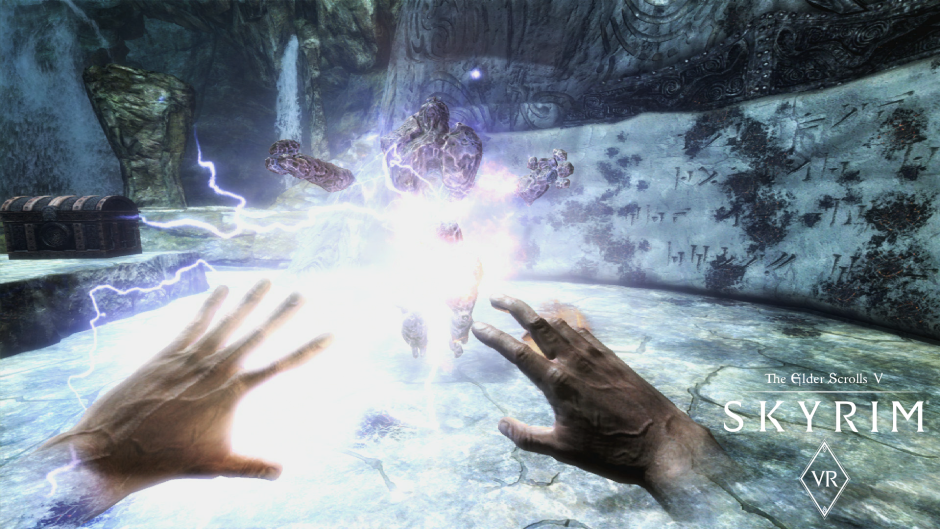 While there have been many bold, experimental, and even bizarre creations within VR, an open world game is a huge undertaking, and one few studios have dared to tackle. Bethesda, armed with the long-lived and much-loved Elder Scrolls: Skyrim, is ready to take on this challenge, and I got to explore the world of Skyrim in virtual reality in a limited demo. The PSVR headset even came complete with a pair of 3D printed horns attached to the sides of the visor, allowing me to don a version of the iconic steel horned helmet as I stepped into another reality.

Visor on and controllers in hand, I easily began moving forward, as Skyrim uses the the industry standard teleportation, where pressing a button to unfurls a ‘fishing line’ control which allows you to select where you’d like to teleport, though Skyrim’s beam is a set distance and is not adjustable. The greatest flaw of Skyrim VR, the fact that it will be released exclusively on the PSVR, becomes immediately and jarringly obvious. Because the PSVR relies on a forward facing camera, you have to keep your body facing that camera, meaning you can’t turn your body for navigation or for fighting. In order to turn your character, you must press buttons to the left or right of the center button on the left PSVR controller, a fact which completely removes you from what should be an immersive VR experience.

Once inside the visor, excluding the directional restrictions, Skyrim feels right at home inside virtual reality. You get the familiar view of your right hand, which holds a weapon, and your left hand, which crackles with energy, ready to cast a spell with the pull of a trigger. The PSVR tracks your virtual hands movements via the camera, and your hands and arms follow your real ones flawlessly. Most of Skyrim’s menus had been disabled for this demo, though I was able to select between a few different weapons and two different spells.

Skyrim has a huge open world to explore! Too bad you can’t turn your body

While Skyrim boasts a huge map filled with beautiful and often breathtaking scenery, the VR demo was set on a rather barren, bleak, and unadorned mountainside, and moved swiftly into a cobweb-and-rat infested cave, not exactly the kind of setting which inspires wonder. I wasted little time in using my fire magic to do away with cobwebs which blocked my path, and exterminating overly aggressive rodents with quick stabs. The PSVR seemed to do much better understanding the action of stab, whereas swinging the sword did not seem to register very well, making this motion far less effective in battle.

Movement within the cave did not trigger any motion sickness, though I did have a good bit of trouble descending a narrow spiral staircase; the sharp difference in elevation meant that the game wanted me to take a ‘step’ in between, but the staircase itself was only about as wide as the fishing line itself was long, requiring a good bit of fussing in order to find a spot I could move to. It took me very little time to discover and do away with a boss, where I did my best Dragon Ball Z impression, by equipping magic on both hands and blasting it with a barrage of both fire and lightning magic. Combat is where Skyrim VR really shines, allowing you to use both hands in any way you like, shooting magical spells in any given direction.

Skyrim seems like a perfect VR import, however it is severely limited by the PSVR platform. The inability to turn your body detracts from the experience significantly, and means that you will probably need to play sitting down, in order to keep yourself oriented towards the camera, which is probably not the preferred experience of a game like Skyrim in VR. The final game will allow you to use a dualshock controller instead of the PSVR wands, which will return movement to a familiar thumbstick controls, but it will do so at the cost of the arm-tracking features of the wands. While the world of Skyrim is filled with potential, and could become a shining jewel of VR, there are several, fundamental elements which detract from the experience, which makes playing it more of a labor of love than something to get lost in. Here’s hoping we’ll get another look at a different part of the world soon–hopefully someplace a little more scenic!