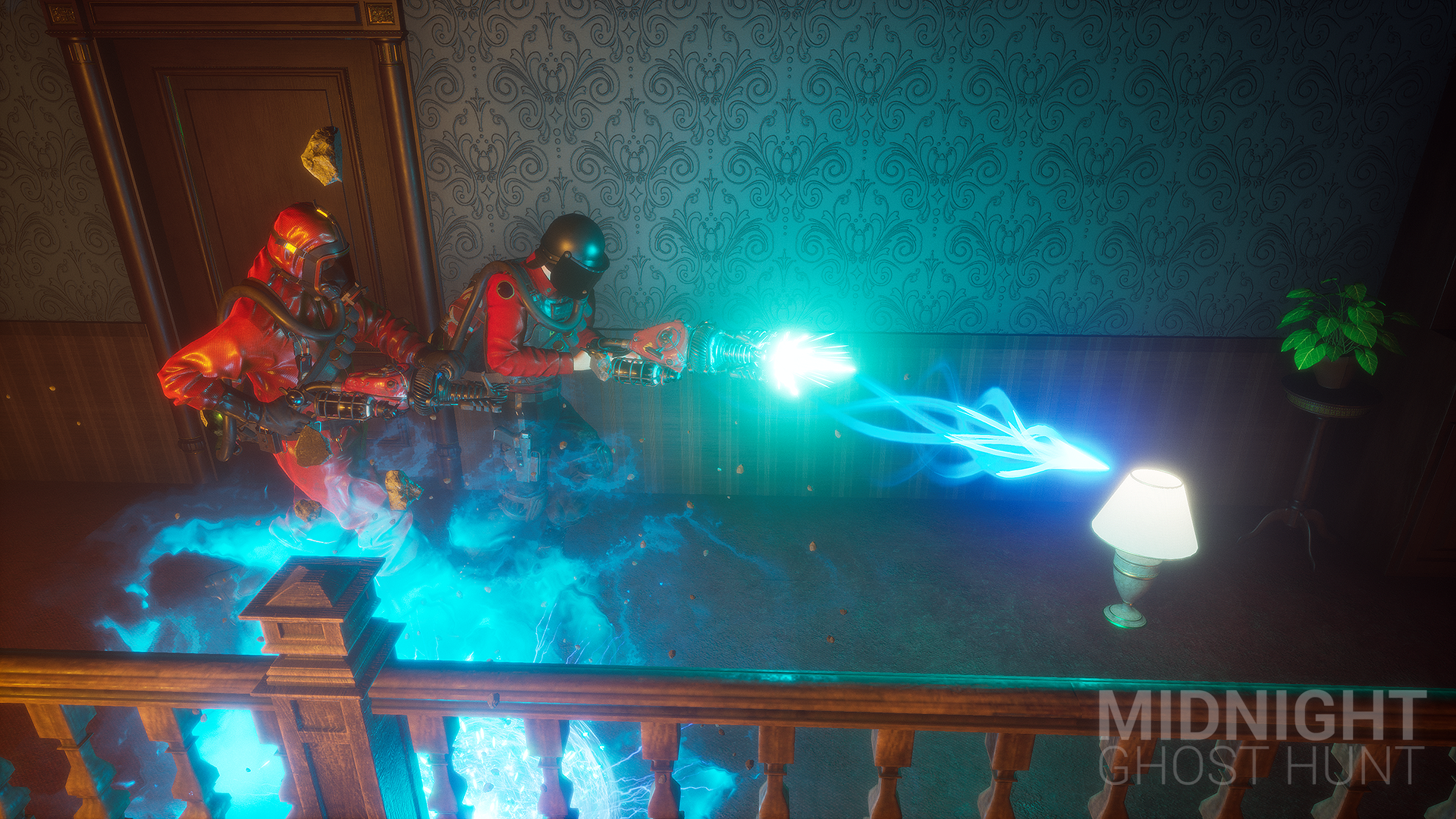 We all know the classic game of hide and seek from when we were kids. One person counts to a predetermined number with their eyes closed while the rest of the people hide. Once the countdown is over, it’s time to search for the hiders. That beloved game has been recreated in various video games such as Prop Hunt, but with the addition of having to eliminate the hiders instead of just finding them. Midnight Ghost Hunt takes it a step further by giving the hiders a chance to fight back. With four hunters on the lookout and four ghosts trying to hide or defend themselves, this Early Access title offers some enjoyable hide and seek gameplay.

Midnight Ghost Hunt’s premise is simple: there are four hunters arriving at a spooky location at 11:56pm with the goal of hunting down and destroying four ghosts. The ghosts spawn in at 11:55pm, giving them one minute to explore the area and figure out what object to possess and where they want to hide. This also gives you time to come up with escape plans or even attack plans if you’re feeling bold. At 11:56pm, the hunters begin their search. They have four minutes to track down and destroy the four ghosts; if the clock strikes midnight and one of the ghosts is alive (weird to say a ghost is alive, but roll with me here), then the ghosts change from their light blue color to red as they power up and go into a rage. This enraged mode increases the damage that they can do, the damage they can take, and also lets them see the outlines of the remaining hunters wherever they are on the map. Now the ghosts have four minutes to enact their revenge and wipe out the hunters. The hunters must either survive until the evac comes in four minutes or stand their ground and destroy this increased threat. Either way, both sides have a chance to go on the offensive, although the ghosts are at a disadvantage in this department until midnight. 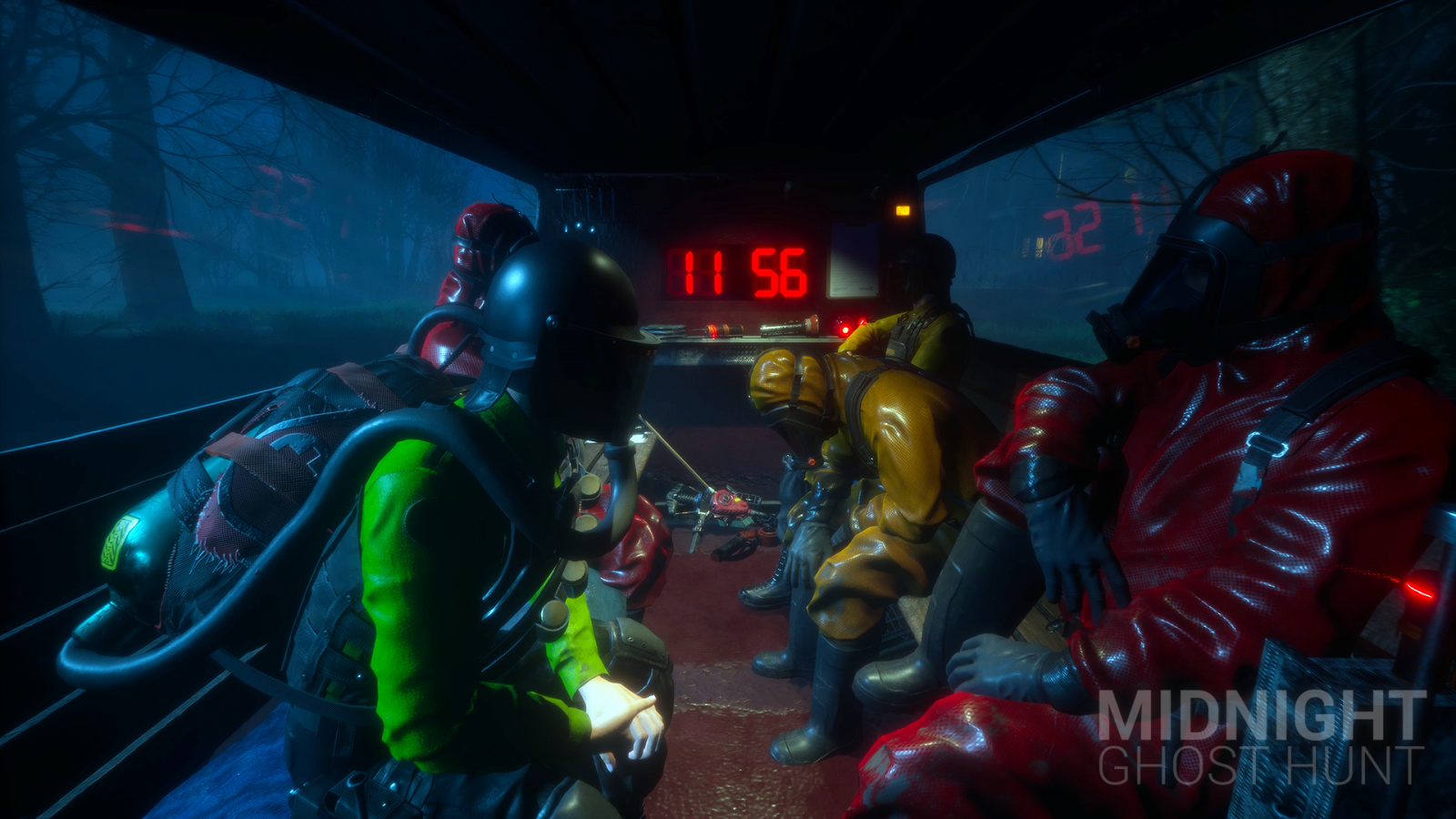 Now that the basics are covered, let’s break down what each side can do. For starters, the hunters select a loadout before they arrive at the haunted site. You can choose one weapon, one gadget, and one passive ability from the list of three weapons, five gadget, and five passive abilities. The weapons include a charged blaster that shoots energy balls and can vacuum up dead ghost bits, an energy baton to bash the ghosts, and a machine gun-esque energy weapon that fires rapidly but has a windup time and can overheat if used too much at once. All three weapons are pretty good, but my personal favorite is the machine gun because of its faster firing rate. The blaster is too slow for me, but sucking up ghosts is very useful. Sucking up the ghost bits prevents other ghosts from reviving their fallen friends and also rewards the hunters with an upgrade point. The upgrade points can be spent at the generator that’s located near your spawn point to power up a weapon of your choice. Also, the generator enables you to change your loadout anytime throughout the match, which is extremely useful if your original strategy isn’t working. Be careful though, because the ghosts can attack and destroy the generator, causing you to lose it forever. It’s got some good durability, but keep an eye on it just to be safe.

As for gadgets, the hunters can carry either a ghost radar, a footprint tracker, a ghost trap, a defibrillator, or an energy grenade. The radar functions with a “hot-cold” system, meaning that the needle goes closer to the red as you get closer to ghostly activity. The footprint tracker lets you follow recent ghost tracks, which is very helpful during a chase. The trap can be placed on the ground and if it catches a ghost, you’ll be alerted to it, and they won’t be able to escape for a short time. The defibrillator is used to revive a fellow hunter if one of the ghosts ends up taking them out. The energy grenade explodes on a small area, exposing any hidden ghosts and weakening them in the process. From my experience, the radar and trap are the best gadgets available, with the footprint tracker following those two. The passive abilities are fairly simple and range from being able to sprint at the cost of lower health, having more health at the cost of being slower, your weapon batteries charging faster, and preventing you from being tracked by ghosts after midnight. I typically went for either the increased health or the battery charging boost. Those made it easier to fight and survive longer, especially when the ghosts went on the offensive. 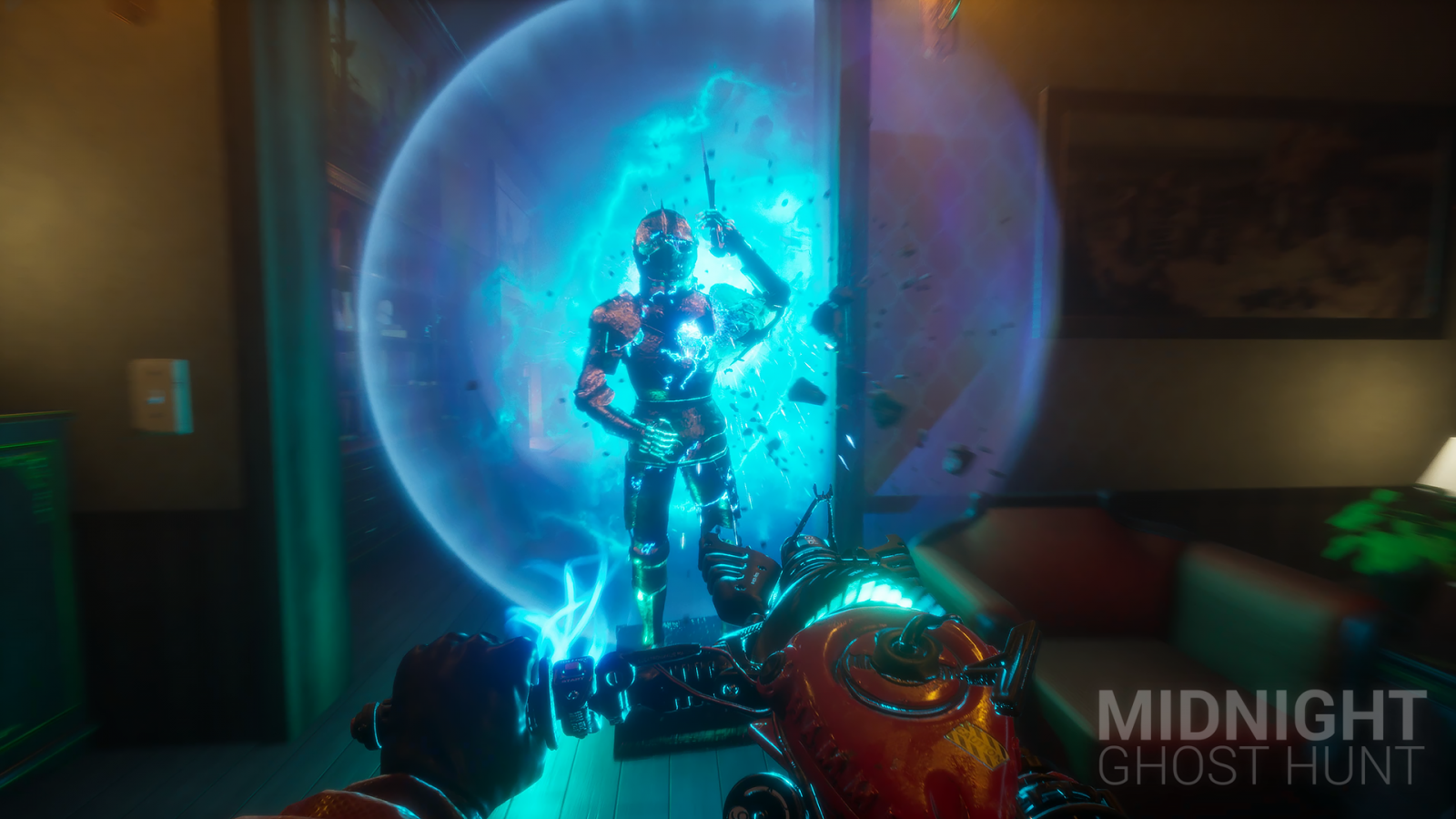 On the ghost side of things, you also have a loadout, but this includes five special abilities, five perks, and five passive abilities. Special abilities include being able to transform into a doppelganger of one of the hunters for a limited time, control and throw objects from a short distance away, release a miasma to act as a smokescreen, etc. The doppelganger isn’t just a sneaky way to try and blend in; in fact, if you’re careful and find the right moment, you can get behind one of the other hunters and choke them out. It takes a few seconds, but if you can get through the animation without being stopped by one of the other hunters, then your target is taken out right then and there. Just be sure to book it out of there and not get caught. I pulled that off on some unfortunate guy who thought I was helping him hunt in the library of the mansion. Controlling remote objects is fun too because you can toss them at hunters to damage them or distract them into thinking that object was you. The special abilities do have a cooldown though, so keep that in mind. The perks and passive abilities feel about the same, but there are some useful things available such as creating false radar readings, creating false ghost tracks, being able to possess objects at greater distances, getting more durability as large objects, not causing objects to break when launched at a wall, and so on.

Speaking of launching objects, as a possessed object you can hold down the right mouse button and charge up a launch. You can use this to travel greater distances or even attack a hunter. You can charge up while moving, so it can be helpful in a chase or even when facing off against a pesky hunter. You can also punch hunters while in ghost form, but I wouldn’t recommend it unless you’re enraged because you’ll likely get beat down if you try before midnight. If you want to do damage before midnight, stick to using objects around you. Another important thing to know as a ghost is that when you stay in place without moving or using any abilities, your ectoplasm meter fills. The more it fills, the more susceptible you are to being found on the radar. This encourages you to move and use abilities instead of hiding in one spot doing nothing the entire game. I appreciate this because it forces the ghosts to be more active and not devolve into a waiting simulator on their end. Also, you aren’t invincible when possessing an object. If the hunters damage it enough, it breaks and your ghost form is revealed, leaving you more vulnerable. If that happens, rush to the nearest object and run! 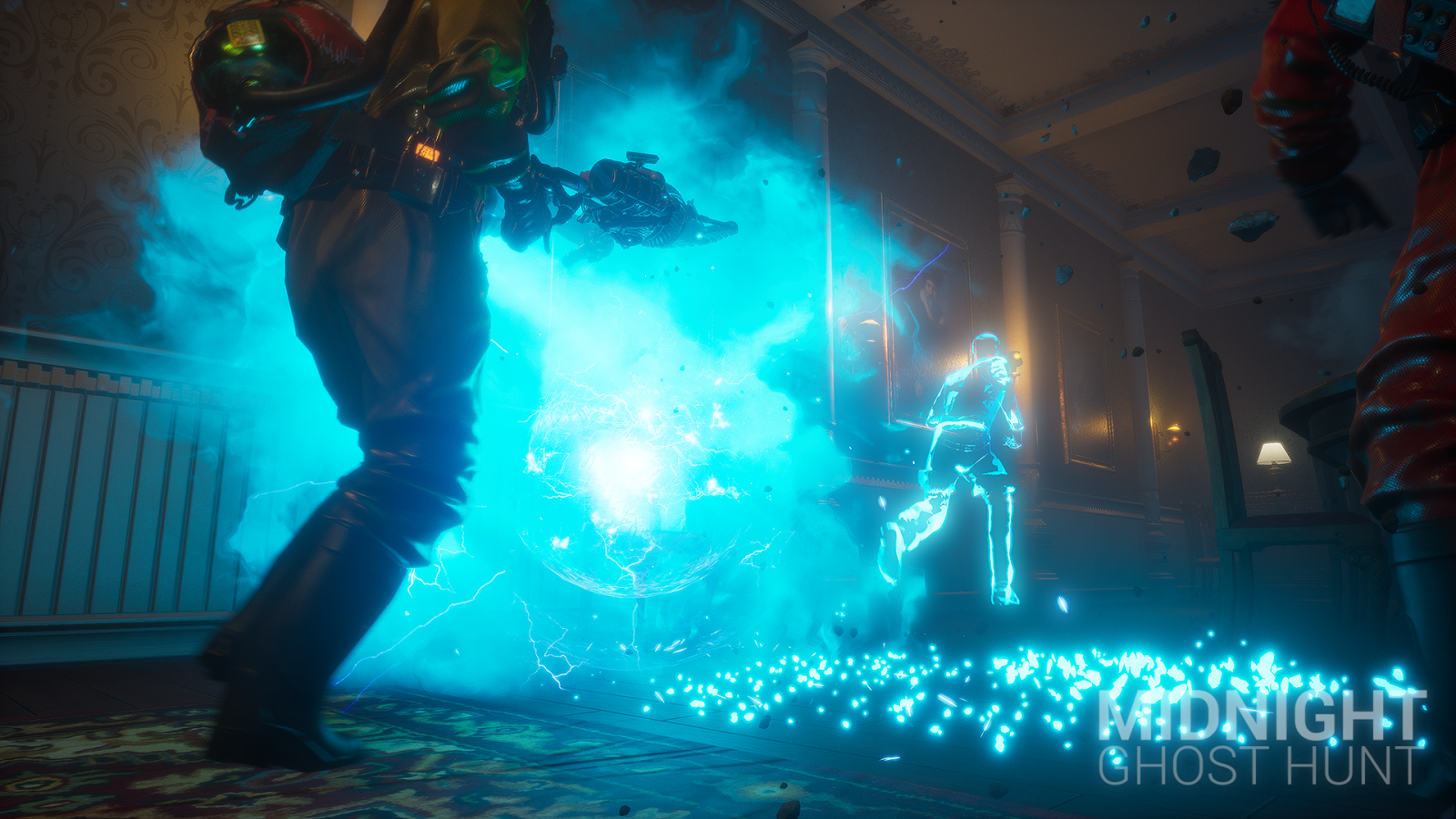 As of now, there are only two maps: the mansion and the asylum. Both maps have a decent amount of space to hide in and explore, although I definitely prefer the mansion map. It feels more unique and has a stronger ghostly presence in my opinion. The gameplay feels smooth and easy to learn, but there’s some extra tips and tricks you’ll pick up along the way. I jumped at the chance to try this because I’ve had a Prop Hunt itch that I’ve wanted to scratch, and it definitely helped. The only thing to consider is that the game seems to be based around players creating their own lobbies for others to join. This means that you have to find a lobby that isn’t full and/or marked as private. That’s not necessarily a bad thing, but I prefer letting the game set me up in matches with people. I think creating your own lobbies would be better suited as a custom private setup, while throwing everyone else into random lobbies could mix things up. That way you aren’t stumbling into a group of friends playing and you being the odd one out. Again, just a personal preference.

Overall, I’d say Midnight Ghost Hunt has potential. For the few hours I played, I had a good time. No lag or framerate issues, the gameplay felt fair and balanced, the visuals created the feeling of deserted, haunted locales, and both hunters and ghosts were fun to play as. Besides the lobby recommendations I previously mentioned, my only other suggestion is adding in more maps down the line. It’s Early Access, so it’s not a big deal right now, but later on it may be needed to keep the playerbase coming back. Even so, I look forward to Midnight Ghost Hunt eventually coming out of Early Access so that everyone can bust — I mean — hunt ghosts.