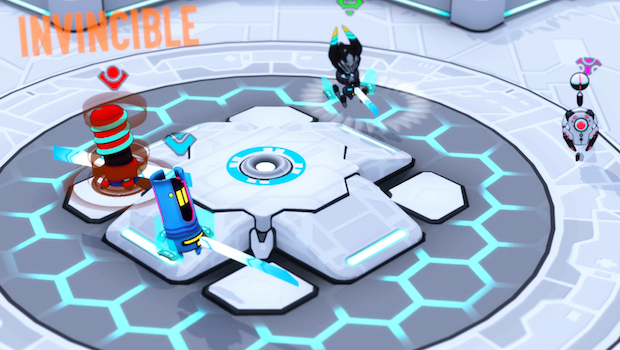 Born from a late-night tech demo involving boxes and knives, DreamSail Games’ Blade Ballet is deceptively simple. Four robots enter, one… well, it doesn’t exactly leave, but it doesn’t get diced, impaled, or imploded either.

Blade Ballet is a four-way robo-deathmatch, in the vein of Battlebots. Each player picks a bot and then goes into battle in an enclosed arena of metallic carnage. Ranging from lances and maces to rotating shivs, each bot has their own style and method, including a special move — ranging from a bouncing bomb to a charge or ground slam.

Each special corresponds to an identity, as the bots you can choose from are all unique and individually equipped. Each has their own weapon and skill that correlates directly to their strengths, while also having a unique weakness. For some, it might be a bevy of offensive weapons in exchange for little shields. For others, it means the ability to stun opponents, but your handling is slow and cumbersome.

So there’s plenty of blades, but the ballet comes into play when the robots meet in the arena. The only movement options are moving, spinning clockwise or counter-clockwise, and jumping, so your best option of striking your opponent is to get mobile. Bots like Torque can spin like a top to become a mobile blender, while others might have to swing a mace or slash with their blade. Mastering the art of becoming a whirling, twirling twister of steel doom is key to being the last automaton standing.

That speed and danger results in a fast and dangerous dance around the arena, with robots deftly slipping in and out of danger to find an opening. That heavily shielded bot may seem impenetrable, but spin in at the right angle, you can slip that blade between the plates of armor and destroy it before its spiked carapace gets you.

It’s a delicate balance of speed and grace, but the combination makes for an exciting multiplayer game. Matches may be one-hit kills, but the game keeps going fast enough that your death often just leaves you anticipating the next round. “One more” was said many times during my time with Blade Ballet, as we went through arena after arena of robotic carnage.

The environment isn’t just a bystander to the action, though; hazards litter the field, often challenging you to not just avoid your enemies’ blades, but the many dangers each map throws at you. While one stage had a laser that would sweep around the arena, annihilating those caught (or shoved) in front of it, another had all four players fighting while trying to outrun an avalanche, complete with pine trees and exploding cutouts of human skiers.

For all the wreckage and carnage, though, Blade Ballet keeps things light with a bright and oddly cheerful aesthetic. Robots explode and impale, but explode in happy little explosions. Arenas are colorful and fun, giving a sense of festivity to the otherwise quick and brutal deathmatch. It keeps things light and fun, and the music keeps you pumping through round after round in a stream of bumping, pulsing electronic glee. Was it odd that I was smiling so much while slamming an enemy with a mace? Probably. Would I do it again? Definitely.

For now, this dance is only a multiplayer affair — those going stag don’t have an option, though that’s not to say it’s out of the question. From what I played, the game already has a significant offering in terms of bot variety, maps, and match-ups. With the promise of more robots to come, there’s only room for growth here. As is, it’s an exciting competitive couch game if you’re looking to make enemies with your friends around a few drinks. It’s a strong showing from the various talents at DreamSail Games, and I’m excited to see more as we get closer to a release date.

Expect to see Blade Ballet on PlayStation 4 sometime in 2016.