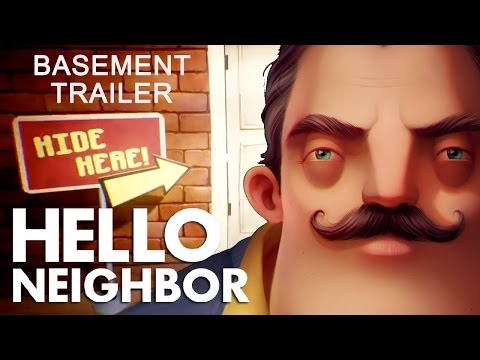 I’ve never played a game like Dynamic Pixels’ Hello Neighbor. It’s stealthy but playful, creepy but colorful, and sprinkled with light horror and humor. The game is currently in its third alpha phase, and looks both interesting and promising.

You play as a man who just moved into the neighborhood and, as it turns out, your neighbor from across the street is rather, shall we say, eccentric. His massive, colorful house defies the laws of physics and all sense of taste or modesty, looking as if the architect drew up the plans while on a severe acid trip. This towering palace of oddities comes complete with a gigantic windmill, rooms built on rickety stilts that appear totally unreachable, and even what looks to be a roller coaster.

Drawn in a cartoony style, at first glance Hello Neighbor reminds me vaguely of something Dr. Seuss would’ve dreamed up. But then things get creepy. The lighting is deliberately dim, both inside and out, frequently creating areas of total darkness and long, ominous shadows. The sporadic thunder booming above and the gusts of wind that whip through the surrounding trees further increase the hair-raising, eerie nature of this title.

Playing as the new guy in town (who is too curious for his own good, apparently), your goal is to break into your weird neighbor’s home and figure out just what the hell he’s up to in there. It may sound like a breeze, but it’s far from easy. Your weirdo neighbor doesn’t take too kindly to strangers poking about his abode and will do his best to chase you down. He’ll come after you with reckless abandon, even if that means breaking through one of his own windows, and he’ll be lobbing vials of glue in your direction to slow you down. You can hide, or you can run back across the street to your own house, but if he catches you, you’ll respawn in front of your own home.

The neighbor is controlled by an adaptive AI that learns from everything you do, adjusting his behavior accordingly. He takes note of where you attempt to enter, the route you take through his house, and even takes note of open doors and objects that have moved or are missing. He’ll place traps in doorways, repair broken windows, place sensors, hang buckets on doors to create noise, and more. The more you play, the tougher and smarter he gets.

The challenge doesn’t stop there though. While desperately avoiding your paranoid neighbor, you must also solve puzzles to progress through the house. Doors that are boarded up might need a crowbar to enter, while some doors are locked and require a key, but finding that key is likely a puzzle all on its own. Hints are scattered throughout the house but are rarely obvious, especially when you’re racing frantically down corridors and around corners to avoid the resident nutcase.

The suspense, and thrilling, pulse-quickening nature of Hello Neighbor was unexpected, considering its playful exterior and harmless nature. The game’s simple soundtrack adds intensity to the experience. At first, you’ll scarcely notice it, but as your neighbor gets close, the tone grows darker, and when he spots you, it’ll immediately double your heart rate. The progressive AI presents a constant challenge, forcing you to get crafty and unpredictable, and yet the odds never feel insurmountable. The puzzles are simple, but the answers are never easy to find.

I’ve been playing Hello Neighbor’s third alpha, which, according to publisher tinyBuild, is actually the fourth build of the game (the first being just a basic prototype). This new build incorporates a larger house than before, an upgraded AI, and the first views of surrounding areas. I encountered a few minor bugs, but since this is an alpha, they’re hardly worth complaining about in the face what looks to be a stable and thrilling experience.

Hello Neighbor is slated to release in summer of 2017. The first alpha is currently available for free on Steam and it’s definitely worth checking out.