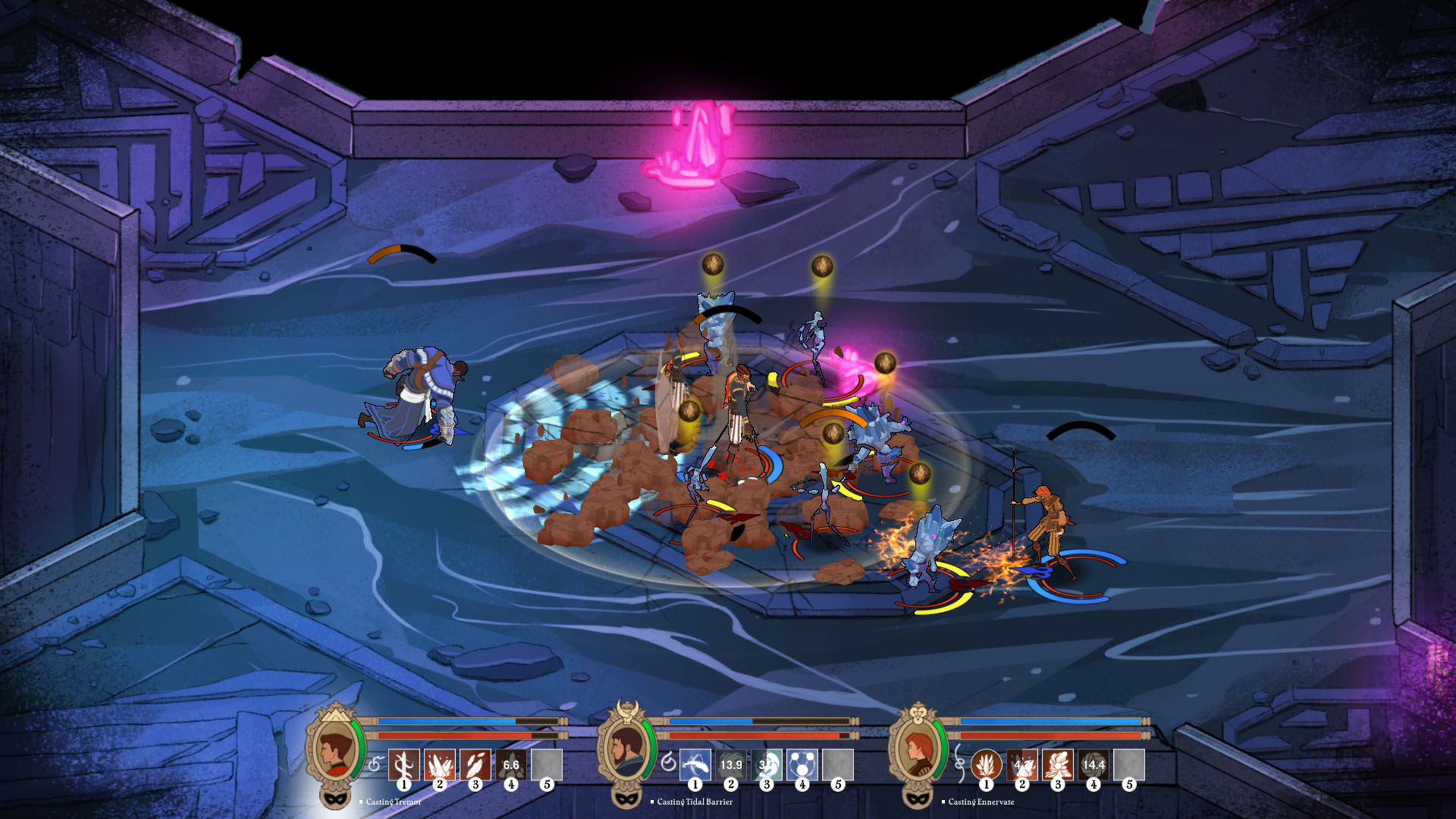 One of my favorite parts of a new role-playing game is getting absolutely lost in the universe. The best RPGs, in my opinion, have lore that begs to be dove into, with vibrant and interesting characters that are all unique, yet cohesive and part of the grand picture.

When I first read about Masquerada: Songs and Shadows, I was fascinated by the concept. A world where magic is not some given birthright, but through the use of Venetian masks and the practice of the arts, sounded like a fresh and original take on fantasy.

In my time playing Masquerada, I couldn’t stop getting lost in the concept, and I’m still thinking about it long after the sound and fury of the show floor has faded.

Masquerada takes place in the Citte de Ombre, where the rich elite (the titular Masquerada) hold the masks that give them control over the elements. You take on the role of Cicero, a clever Inspettore and part of Ombre’s elite, who was exiled from the city after failing to stop his brother’s uprising that sought to take power back for the non-masked Contadini. You’ve returned from exile to search for a missing member of the upper caste, but soon find yourself embroiled in a much deeper conflict between the Contadini and the Masquerada.

The dressing is a fresh change of pace, but the fittings are familiar. You control Cicero and his party through a layout reminiscent of older Bioware titles, in an isometric map where you can explore, talk and do battle. Conversations happen in text bubbles, though cutscenes also occasionally roll when a more cinematic approach is needed.

In combat, though, things get a little more heated up. Each character can execute basic attacks, as well as a number of elemental and mask abilities depending on their affinity and playstyle. One of Witching Hour Studios’ writers Nicholas Chan described the combat system to me as Dragon Age: Origins, but faster. Rocks hurtle across the field, flaming shields ignite enemies, and water soothes wounds at a much faster pace than isometric RPG players might be accustomed to.

This is due to the nature of combat, as masks are not the sole source of power in Masquerada. Much like an archer must practice their aim, so a mage must focus and finesse their art, and the mask-wearing fighters of Ombre do so by practicing their respective Media. Dance, theatrics, song, and even Maori-esque war chants hone their talents.

Each fighter’s speciality translates directly to their playstyle, in ways that make each of your party members feel even more unique than simply the element they wield. Cicero can leap and bound across the field of combat, kicking up earthy craggs as he goes. Kalden stomps and pounds his chest, invigorating his allies with strength and vitality.

The crux of Masquerada, the masks that grant power, was created in a simple but understandable format — a Dungeons and Dragons DM who got fed up with mages. Ian Gregory, the creative director of Witching Hour Studios, recently wrote in a Playstation Blog post that he’s always been annoyed by the power differential between spellcasters and non-mages.

“As a DM, I had to figure out a way to have magic prominent without having my fighters and rogues stacking dice in the corner as a group of my goblins were being blown up by another fireball,” wrote Gregory. “So, I took away the wizards and made magic something attainable by anyone who could get their hands on a mask. Players immediately began seeking out masks that enhanced their class abilities. Combat became a dance of steel and spells. And that, in turn, became the basis of what would become Masquerada.”

Your warriors are each powerful in their own right, but you’ll have to wield their powers effectively to conquer the more difficult enemies. The tactical pause button lets you quickly re-evaluate and adjust your strategy on the fly, party members can also “detonate” others’ elements on foes to cause additional damage and status effects. Damaging with one element, then detonating using a differently attuned party member’s X ability, can stun, blind, and disable high-priority targets.

Chan told me that this would be essential in some of the harder fights, and I experienced some of that myself in facing the boss of the demo — a massive, sentient volume of literature that seemed a bit scarier than your average Hop On Pop. I had to manage cooldowns, execute my abilities with thought and precision, and utilize each of my masks’ powers in times of dire need. It was tense but exciting, and though battles seem chaotic, they’re really involved struggles of wit and precision, more Baldur’s Gate than Diablo.

The result is a world that feels wholly unique yet strangely familiar — it gives off shades of everything from the aforementioned Dragon Age to The Legend of Korra, but it layers over the top a universe that is packed with complicated characters, motivations, struggles, and ambitions. Companions play a larger role than just hunting fellows, as Chan told me that their motivations and individual desires play into the story in a meaningful manner as it progresses.

During my demo, I saw references that continued to pique my curiosity. Maskrunners, who stole or murdered in order to smuggle powerful masks into the hands of the Contadini rebels, were vicious and powerful enemies. Corpses were found dead and bloodied, with terms like the Regenti and the Contadini tossed around as common suspects. Monsters animated themselves as living literature to rend my party to shreds. I was soon numb to the reply “we can’t give that away just yet,” and that just encouraged me to prod further.

A story of intrigue and conspiracy, draped in a world in conflict over class and privilege, with a fleshed-out setting and an enjoyable combat system. Masquerada: Songs and Shadows is a full package, and one to keep an eye on going into the new year. Look for Masquerada to hit PS4 and Steam sometime in Q2 2016.