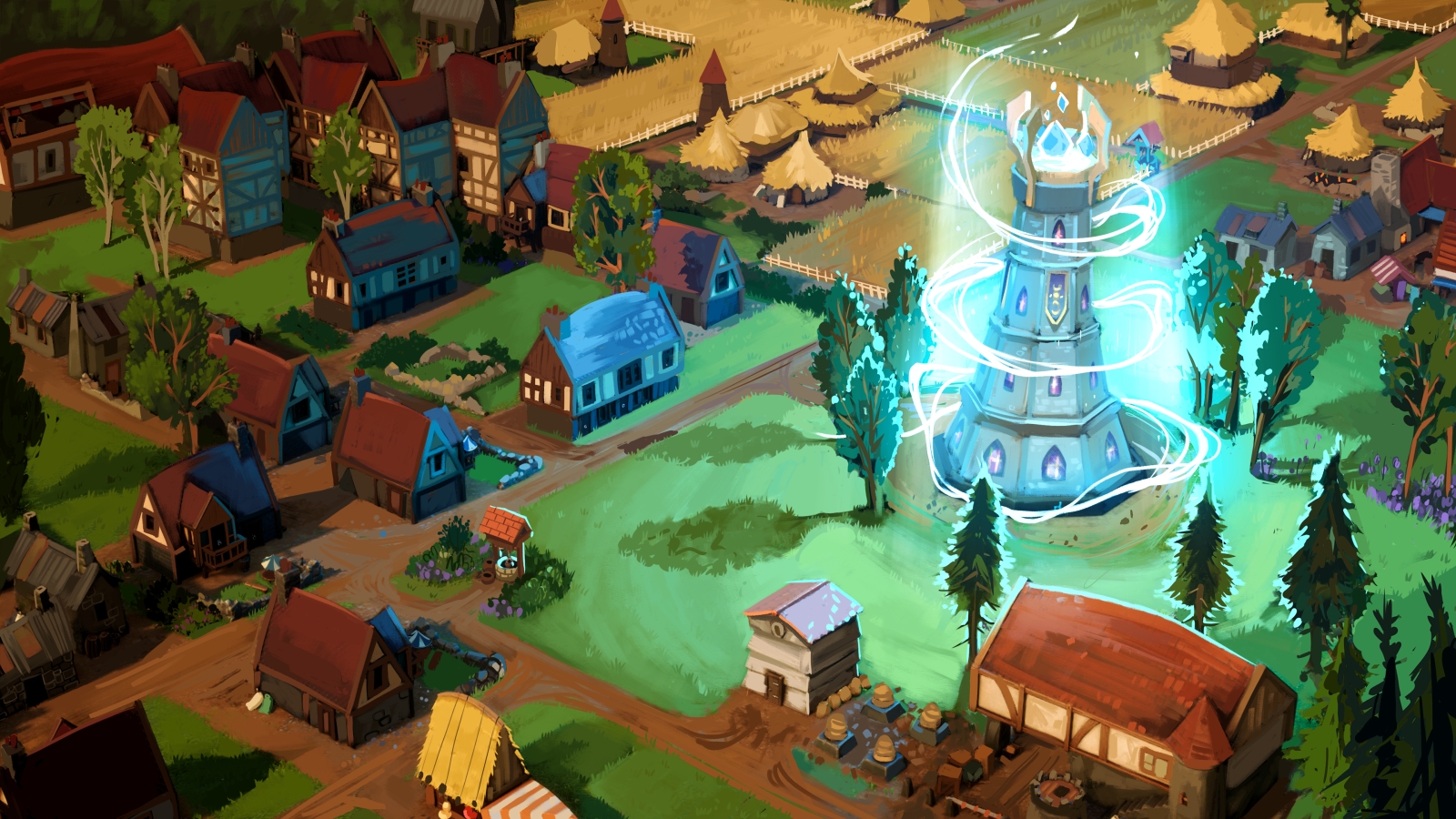 I have forever been on the hunt to find city-building/management games similar to my two all-time favorites, Pharaoh and Zeus, and nothing has ever come as close as Distant Kingdoms has. The last few days I have spent adventuring my way through the game have been splendid. Sure, there are a few hiccups as it’s still in early access, but it’s been a relaxing and fun time thus far.

Distant Kingdoms combines city-building with a D&D RPG adventure element tossed into the mix. You start out on a small, uncovered piece of land, and through exploration via your adventuring party that embarks on missions from your tavern, you uncover more land to occupy and grow into. Much like most city-builders, in Distant Kingdoms you’ll need certain resource buildings and goods to keep your population happy. There are a handful of races in the game: Humans, Orcs, Dwarves, and Elves, and you’ll have to juggle your city to keep your peasants and the more snooty Citizens happy and comfortable. 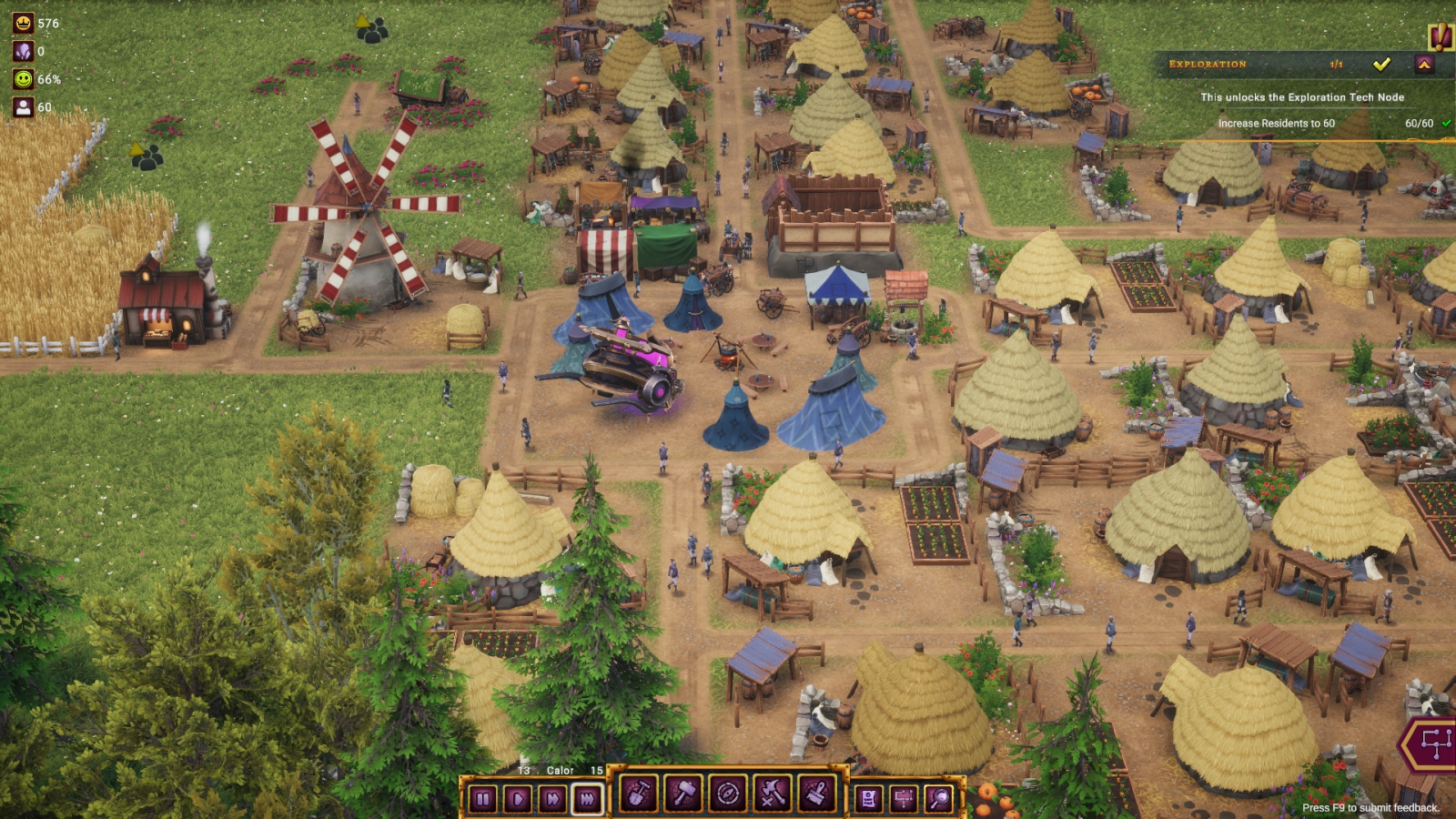 The start of my little city.

Getting your first encampment up and running isn’t too hard, and the user interface is quite easy to learn and navigate. Simply plop down some houses, a marketplace, a warehouse, and a water well. The citizens will want basic needs to start, and I really found that the peasants were much easier to keep happy than the Citizens were, as is the case with most games in this genre. Once you start building your city up with the elite ranks, it will get really interesting. You’ll unlock the Tavern quite fast, which is necessary for exploration via your adventuring party, and this is really what sets Distant Kingdoms apart from other city-builders I have played.

From your Tavern you can recruit an adventuring party to go out and explore for you. I am not sure if you can get more than four adventurers at a time into your actual party, but you will have a constant supply of races and jobs to recruit from. These adventurers all have certain skills, be it the ability to speak any language, being super athletic, or a master charmer who can flatter their way out of any situation. I found it was best to have a little bit of everything on my team, and did not struggle much with my random encounters. 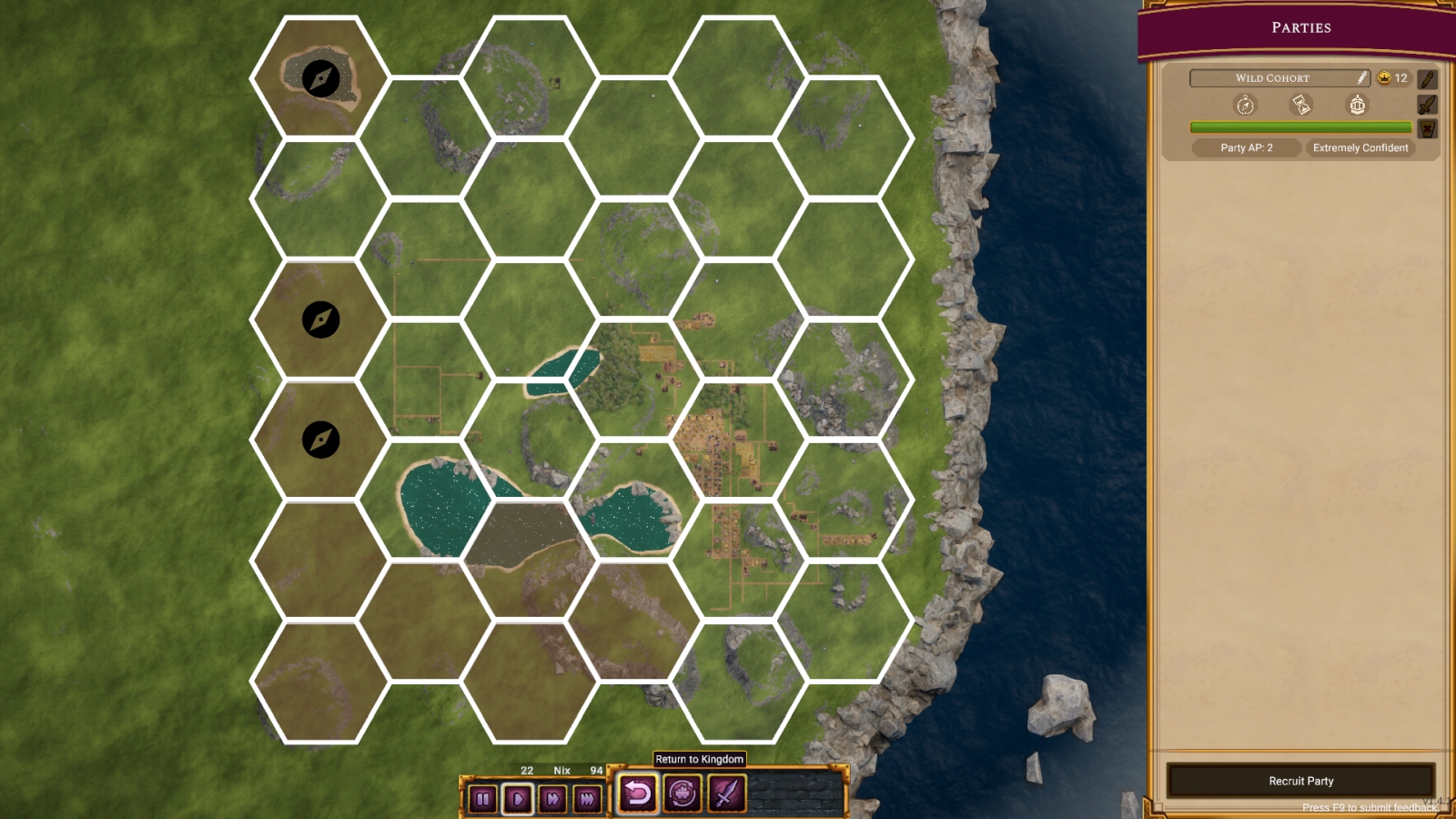 A glance at the exploration map. You can explore one hex at a time with your adventuring party.

Once you send your party out to explore a hex on the map you will get into different scripted scenarios where you’ll encounter monsters you have to fight your way through or puzzles inside buildings that you need to solve. Some are pretty simple, but some are actual boss fights and can be quite challenging. I only encountered scenarios where I had two choices to pick from, but that isn’t to say there are not harder ones down the road as the game progresses.

Your party abilities all come into play here during your random RPG encounters, and if you do not have someone in your party who can pass these “tests” you’ll have to use AP (action points I assume) to try to force your way through. I only had one encounter where we did not succeed and after I leveled my adventuring party up a bit, I was able to pass with no issue. If you run out of AP you fail the adventure and you do not uncover the territory. 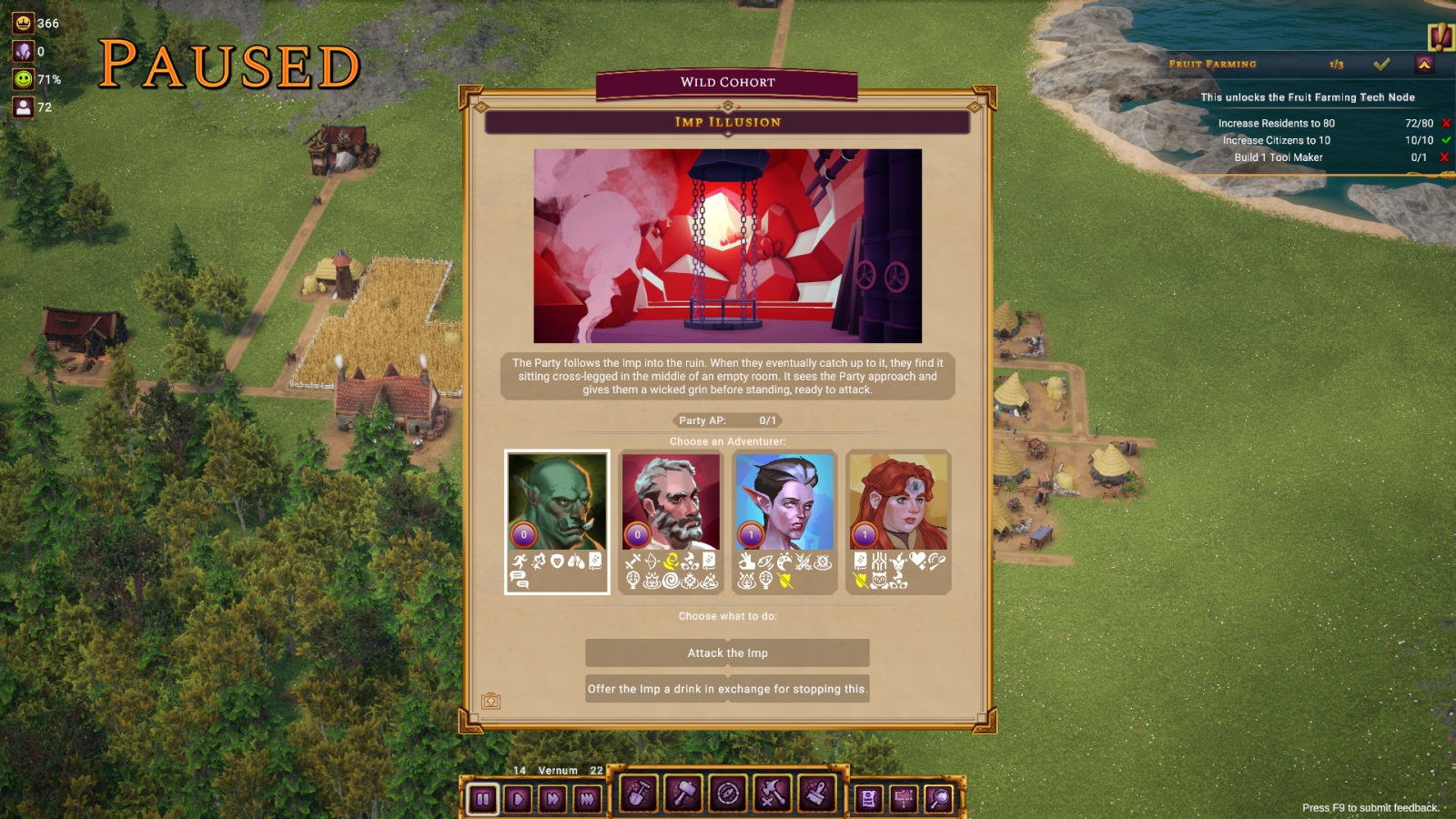 My adventuring party in an encounter. You’ll work your way through several phases of each encounter to win. The yellow highlights that your adventurer can pass the certain requirements with ease.

Once your party succeeds, and sometimes there is no RPG aspect to it at all, you open up a new hex on the map to build in. You’ll discover new resources, race encampments which open up new technology, and sometimes some scary monsters! I really enjoyed this element that the game added, but at times I did find myself checking out of reading through the events, as it interrupted me right in the middle of building something in my city and I just wanted the event to end. I also think it could be fun if you could unlock some cool treasure after defeating bigger bosses, be it a statue or fountain for your city. Something your adventurers could bring back to brag about and say “Hey, look what we did!”

The technology tree is how you unlock new production for your city, such as farms, schools, and specialty goods for your citizens. This seemed to move really fast, and I am not sure if it was intended to be this way for the press copy I received or not, but if I have any suggestions to make, it would be to slow things down a tad. You will unlock each new technology by setting and reaching goals, i.e. population of 50 and 4 Citizen rank. These goals flew by, and I felt like I had way more technology than my small starting city needed, which led me to being overwhelmed quite quickly. Though, as a disclaimer I was playing on Free-Play vs the Campaign which was still locked at the time of my preview. 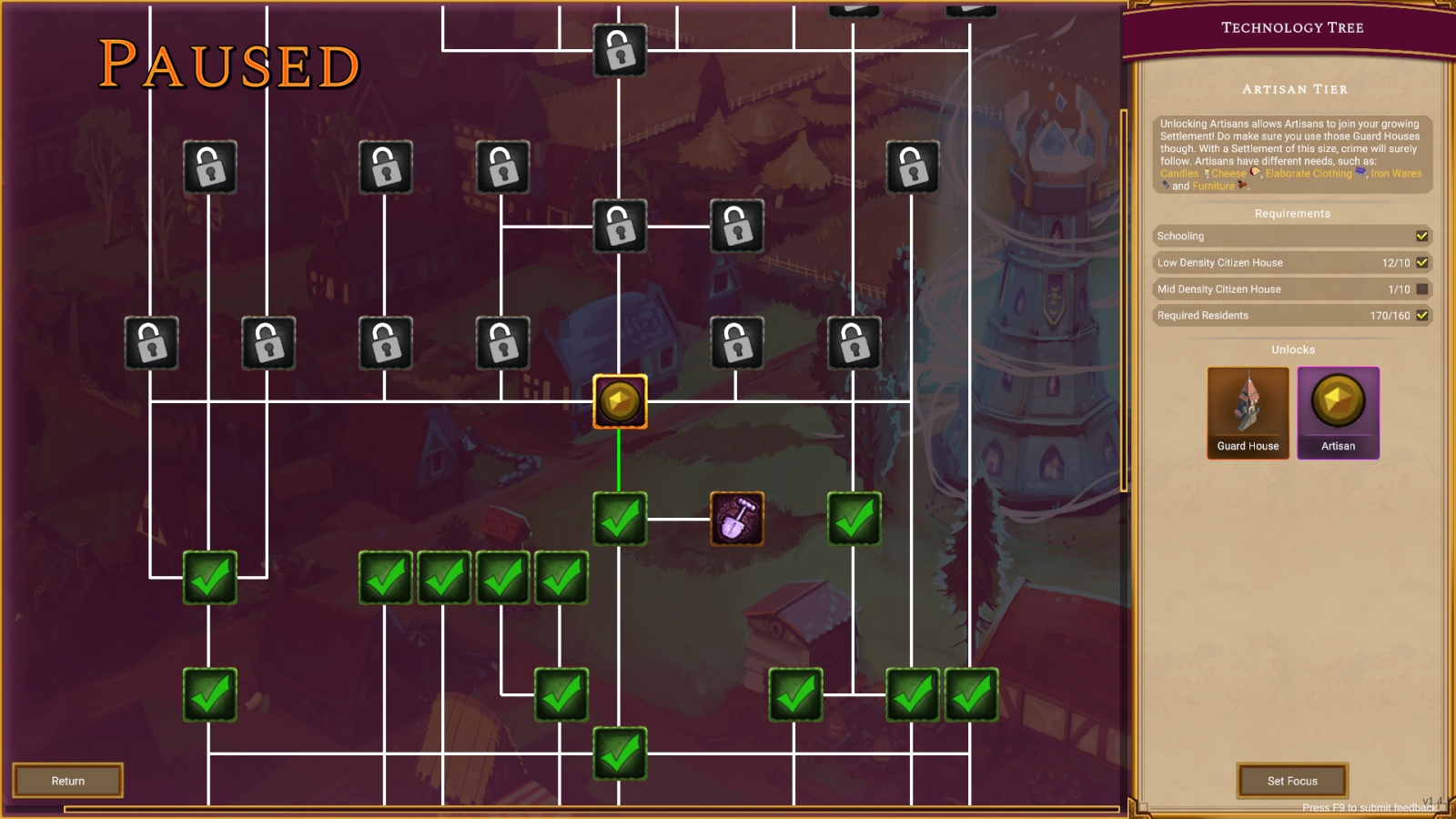 A glimpse at the technology tree. You need to meet certain goals to unlock each node.

Because of how fast I unlocked technology, I ran into an issue with my game where I built too much too fast and could not get people to move into my city to work for me. I spent easily over an hour trying to figure out if my roads were all connected, building new houses and separating them into sections that could be self sufficient, and nothing really worked. It was probably a user error on my part, but I ended up destroying 60% of my city and just starting over small. People started moving back in, and the jobs were finally getting filled. It did not feel obvious to me what I did wrong, and I am chalking it up to me not paying attention to something that I built that progressed things too fast. Even with that little hiccup, I still have had a blast previewing this game.

I did run into a few frame rate issues while playing Distant Kingdoms, which is odd because my computer can more than handle the specifications. At times the game lagged out or chugged. I found this to happen most often when I zoomed in closer to see if there was an issue with a road not being connected. But I will say, when you do zoom in the detail is fantastic. The town is bustling and alive, and the team did a phenomenal job with these small details. 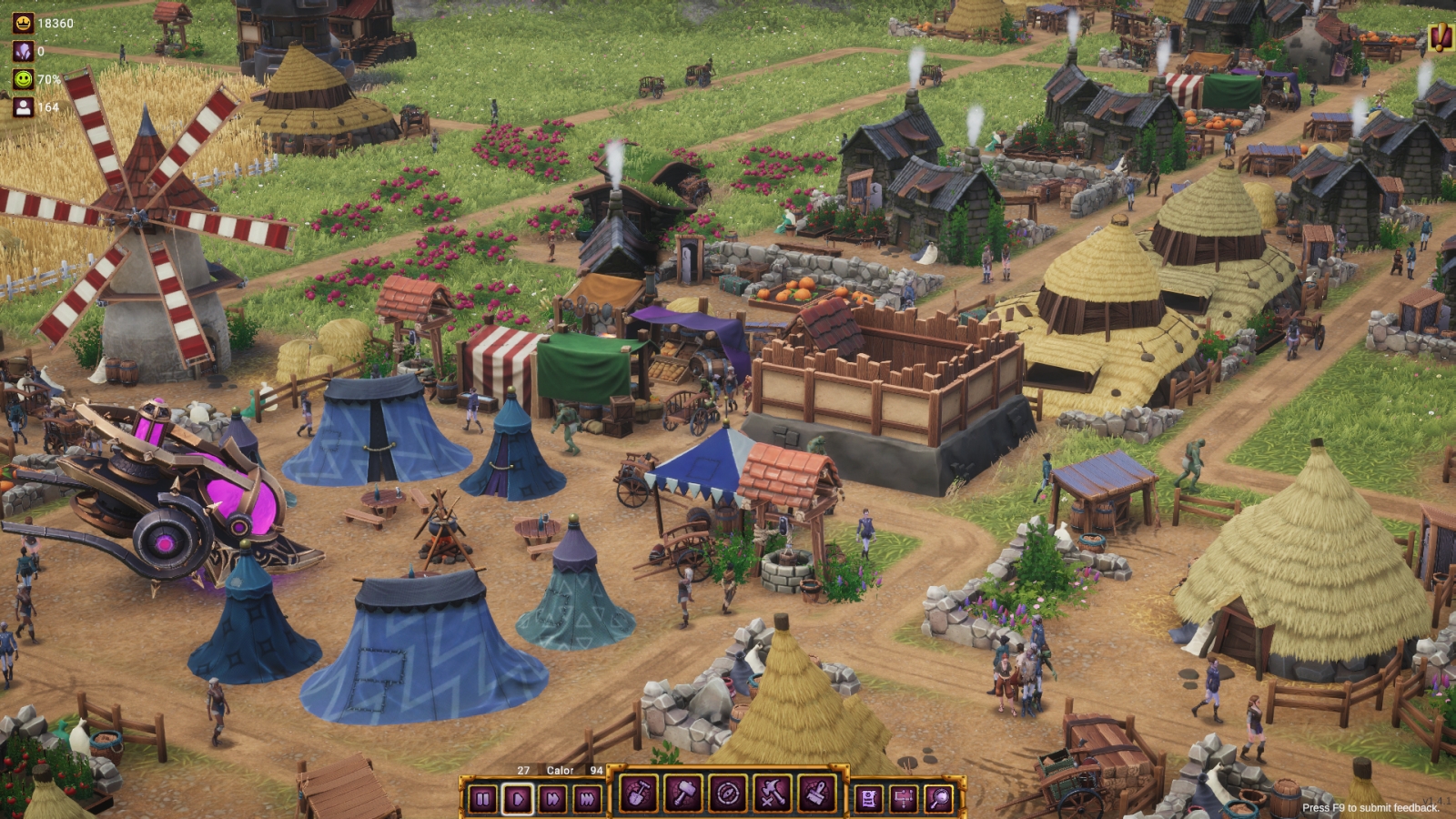 A close up of my bustling city! The details are wonderful!

The musical soundtrack for Distant Kingdoms is very upbeat and lifting, but it is quite repetitive. The studio may consider adding in a little more flavor to the mix. I know I am probably one of the only people who doesn’t put on their own music while gaming, but I like to be immersed in what I am doing. I’d honestly rather just have ambient city noises than hearing the same six songs looped over and over.

My final thoughts on the Distant Kingdoms preview I had the pleasure of participating in, is that it combines some of the most beloved elements of classic city-building games with some new and fun twists with the unique RPG elements. Distant Kingdoms has HUGE potential to be among one of the best games in this genre. I will definitely be back for more, and will continue to follow this game closely. It kept me satisfied and entertained for the last five days, and I really can’t wait to see what the devs add in next. Even in this current state, Distant Kingdoms was a delight to play.

Distant Kingdoms is currently in Early Access, and on sale on Steam for $21.24. If you’re a fan of the classics like Pharaoh and Zeus, Distant Kingdoms will be a must have for your collection.

Holly Hudspeth is a best-selling author living in Fort Worth, Texas. She has six published novels to date; The Skyy Huntington Series, which is an epic dark fantasy adventure, and One Small Detail, a stand-alone medieval fantasy. Holly also enjoys writing fan fiction based on her avatars from games such as EverQuest, Elder Scrolls Online, and World of Warcraft. Her first major purchase at the established age of nine was the NES, and she has been gaming ever since. She enjoys fantasy games, city builders, RPGs, MMOs, SMITE, and The Sims franchise. Most nights she is in SMITE with her husband and friends, or playing ESO. When she isn't gaming, she is probably either at Disney or planning her next trip there.
Related Articles: Distant Kingdoms
Share
Tweet
Share
Submit