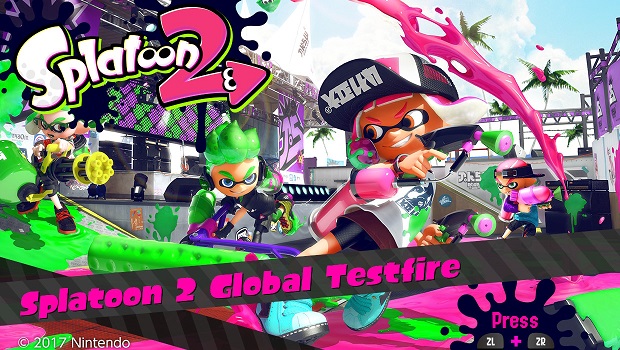 The original Splatoon was one of the Wii U’s few big hits. It’s an online shooter with a twist: you shoot ink, not bullets, and you can swim through your team’s color of ink to move quickly and reload. I put dozens, maybe even hundreds of hours into it (I mained the Heavy Splatling Deco, essentially an ink minigun), so I was pretty excited when the sequel was announced. Naturally, I took the first possible chance to test it out, which was yesterday, March 24, from 3:00 to 3:59 p.m. EST. A demo version called a Test Fire has been made available for free to promote Splatoon 2.

The remaining Splatoon 2 Test Fire times, as of the posting of this article (in EST), are:

Each weapon kit has three parts:

The Splat Dualies fire very similarly to the Splattershot (basically an ink submachine gun). The sub-weapon, the Curling Bomb, is like an explosive curling stone.

The special attack was something completely new: the Ink Jet, a jetpack with a grenade launcher. While flying, you automatically shoot ink directly below yourself and and can drop bombs on anyone nearby. It feels awesome. Don’t get carried away, though—you’re not invincible while flying, and it takes two bomb hits to kill someone.

The really disappointing thing, though, is that you’re sent back to where you took off at the end of the special’s duration rather than just landing wherever you ended up. Worse, there’s an indicator left behind where you took off, so savvy enemies can duck into cover nearby and be ready to ambush you as soon as you come back.

After a few games, I switched to handheld mode and found that the tilt controls felt much more like what I was used to. Obviously, this also made the screen much smaller than what I was used to, but it didn’t take that long to get acclimated to that. I didn’t notice any reduction in performance, which was a pleasant surprise. Even more surprising was the fact that transitioning from console mode to handheld mode while in the waiting room didn’t have any adverse effects.

The remaining main weapons and sub-weapons were the same as they’ve always been, with one notable change: the Splat Roller, a melee weapon, now flings ink in a long, thin line when the wielder swings it while jumping, as opposed to the short, wide spread that happens when you swing it on the ground.

A jumping swing now flings ink farther, but not in a wide arc.

There is also a notable change to the player interface: the ink tank graphic that comes up when you’re reloading now has a line that tells you when you have enough ink to use your sub-weapon at least once.

The ink tank now has a visual indicator of how much ink you need to use your sub-weapon.

The new stages didn’t hold any major surprises. The specials, though, are all completely new.

The Splattershot gets the Tenta Missiles, a barrage of auto-targeting explosive projectiles. It can be difficult to avoid them all. I thought this was the most practical of all the new specials.

The Splat Roller gets the frankly disappointing Splash Down—your Inkling will leap upwards and come crashing down with a huge splash of ink. This would be great if the Splat Roller itself didn’t do a good job of covering close combat. This special would be better suited to a Charger or a Splatling, both of which have trouble up close because they have to charge up a bit before firing.

The Splat Charger gets the Sting Ray, which shoots a thin, steady stream of ink through walls and any other obstacles on its way to the floor or your enemies. Although I’m not very good with Chargers, I can see that this weapon has a lot of potential.

Overall, the aesthetics and gameplay style are closely in line with the original, but there is plenty of new content as well that changes up the strategy. I’d say Nintendo is on the right track with this sequel, and I’m looking forward to playing the full game when it comes out!