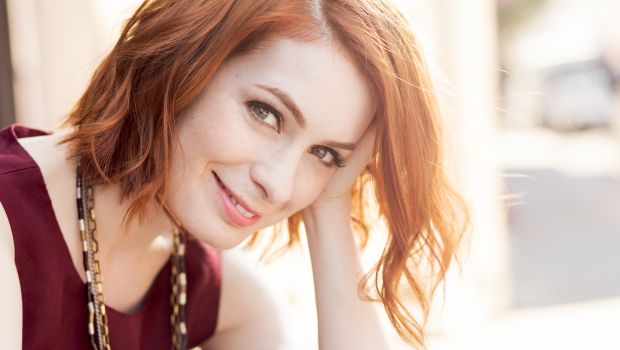 Felicia Day, actress, comedian, writer and of course, gamer, has become a household name for many since she first caught our attention on her web series “The Guild,” before quickly becoming one of the busiest people in the entertainment business, appearing in shows like “Supernatural,” starring alongside Neil Patrick Harris and Nathan Fillion in Dr. Horrible’s Sing-Along Blog, launching her own YouTube channel “Geek & Sundry,” and even finding the time to do some video game voice acting.

I had the pleasure of having a one-on-one interview with Felicia in which she discussed everything from her history in the media, what she’s been playing lately, her opinions on being considered a role model, writing a memoir, her Amazon in Diablo 2 who she nicknamed “Booty Call,” and her brand new memoir entitled “You’re Never Weird on the Internet (Almost).”

Paul Cesar: First off, let me say thank you on behalf of the Gaming Trend staff for taking some time out of your busy schedule to talk to us. As you know, our readers are mostly gamers in some form or another, so I’m sure they’d love to know what have you been playing lately.

Felicia Day: The pleasure is all mine! Well, I finally got around to playing The Witcher 3! I know I’m a little behind, but I’ve been having a lot of fun with it. I’m also streaming Life is Strange and Cook, Serve, Delicious!, which is a really silly game that my fans love. I’m a pretty big indie player and there are so many games in my Steam library that I can’t keep up with them.

PC: Speaking of Life is Strange, I did catch you playing that on Twitch and was wondering what it was about that game that made you wanna not only play it, but stream it.

FD: You know, I love those type of adventure games. I grew up with King’s Quest, and games like these are a new version of those old-school adventure games which have become popular again thanks to the Telltale phenomenon. I’ve always loved their games; The Walking Dead, Game of Thrones, Tales from the Borderlands… games in which your decisions really make an impact on the story, and they definitely make an impact in Life is Strange. When I get back from my book tour, I’m definitely going back to it and finishing chapters two, three, four and I seriously can’t wait for five. I thought it was a fun game to play along with an audience because you can rewind time and second guess yourself, which I’m really good at in real life. (laughs)

PC: I’m looking forward to seeing their rest of your playthrough if you do decide to stream it on Twitch, and I’m sure your fans are as well! So, the title of your book, “You’re Never Weird on the Internet (Almost),” is really interesting. Can you help us understand the meaning behind the title, and why you felt now was the right moment to write a memoir/autobiography?

FD: Well, the last couple of years I’ve been touring a lot of the world giving speeches and presentations at different universities and conventions, talking about my life and how I got to where I am now, and people really seemed to respond to it. Especially the message of embracing what you love and not being ashamed of it, because I believe you’re a much freer person when you do. Unfortunately, in life we sometimes don’t get to do that, and we abandon things we love as we grow up or become adults because we feel like we won’t fit in, and the great thing about the internet is it can allow us to be who we wanna be, regardless of where we are physically. I love that idea, as well as encouraging people to create on a small or large scale. So, because people seemed to enjoy my presentations, I decided to turn that message into a more prominent form, given the opportunity.

PC: It’s definitely a very positive message and one I know many of us can get behind and support, which is probably why your book has received so much praise. This is the first book you’ve ever written, correct? How was that experience and is it something you’d be interested in doing again?

FD: Yes! This is my very first book. I did write The Guild for six seasons and countless of other shows on the web, a couple of screenplays, but never a book like this and I certainly don’t know if I ever need to write another memoir, but I would really love to write a fictional book in the future. The process of writing this book was challenging but really fulfilling.

PC: A lot of your fans, especially young women, consider you a role model. How do you feel about the thought of people looking up to you?

FD: I always love giving advice and helping people. I love creating communities in which people can be themselves. I never set out to be a role model, I’m just who I am in a very firm way. I never let people’s negativities knock me down and as hard as they wanna knock me down, I certainly feel it but I get back up again every time because I know who I am and what I love. Just because others don’t like the way I look or the way I was born and try to impose their belief systems on me, doesn’t mean that I have to give in, and hopefully that translates to people who love gaming or girls and women who love things that aren’t traditionally female, because in the end “traditional female” is just a world view being imposed on them, it’s not necessarily the truth. So, if I can help people be themselves and enjoy life more, that’s awesome!

PC: That’s a great message and something we can all hope to achieve in our own way! I quickly wanted to ask you about your YouTube/website, “Geek & Sundry.” How did that come about and what did you wanna achieve with it?

FD: Geek & Sundry was started a few years ago when YouTube was funding channels to help them start up businesses around web video, and they funded my company for two years so now we get to stream and make videos for all sorts of platforms. We do a lot of tabletop gaming, video game content, and we’re now expanding to bigger platforms like television, but always with the idea that we’re celebrating games and gamers. I love giving people a voice who sometimes don’t have a voice in video, and give them a place to congregate and create a community around the things they love.

PC: If you don’t mind me bringing it back to gaming once more, we know you’re a pretty big fan of World of Warcraft. Since you’ve kinda moved away from that, are there any other MMO’s that have sparked your interest?

FD: I’d love to have time to play more World of Warcraft! The new expansion seems really cool, and I’m gonna go to BlizzCon this year for sure! I actually talk a little bit about BlizzCon in my book, and going there eight years ago and trying to hand out bookmarks to get people excited to watch The Guild, person by person, and not really getting a lot of takers because the show had just been released. But yeah, I’m a huge fan of Blizzard Entertainment. Obviously I know WoW the most, but I was a huge Diablo addict in college. I remember dialing up to Battle.net and playing a little bit of my Amazon who I named “Booty Call.” (laughs) It was just an awesome way to get away from exams, really. But if I have the time, especially when the new expansion comes out, I will be there!

PC: I’m still recovering from that last comment, that might be the funniest thing I’ve heard in a while! We know you have your book that just came out but before I let you go, what else can we expect from you in the near future?

FD: I actually have a couple of projects that I’m developing as a writer. I kinda wrote this book because I love Tina Fey, who wrote “Bossypants.” She’s pretty much my hero in that she created her own show which she wrote, produced and starred in, which I did with “The Guild” in a much smaller scale. My next project will hopefully be a bigger version of that. I still work with my company Geek & Sundry and, really, since the book is out I have more creative freedom to explore new stories, and I’m very excited about that going forward. Oh, and I’m also very excited about “Con Man” this September, a new web series from Firefly’s Alan Tudyk, and I’ll be in several of those episodes.

PC: Awesome! Once again, thank you for the taking the time to talk to me and congratulations on your book! You certainly deserve the praise it’s getting. I can confidently say that we’re pretty big fans of yours at Gaming Trend.

FD: Thank you too Paul, and good luck with everything as well. Gaming Trend is a really cool site and I’m looking forward to seeing more from you guys in the future!

Felicia’s book “You’re Never Weird on the Internet (Almost)” is currently available in hardcover, paperback, audiobook and on Amazon Kindle. You can find it on the Amazon storefront here or visit Felicia’s official site for the book here.