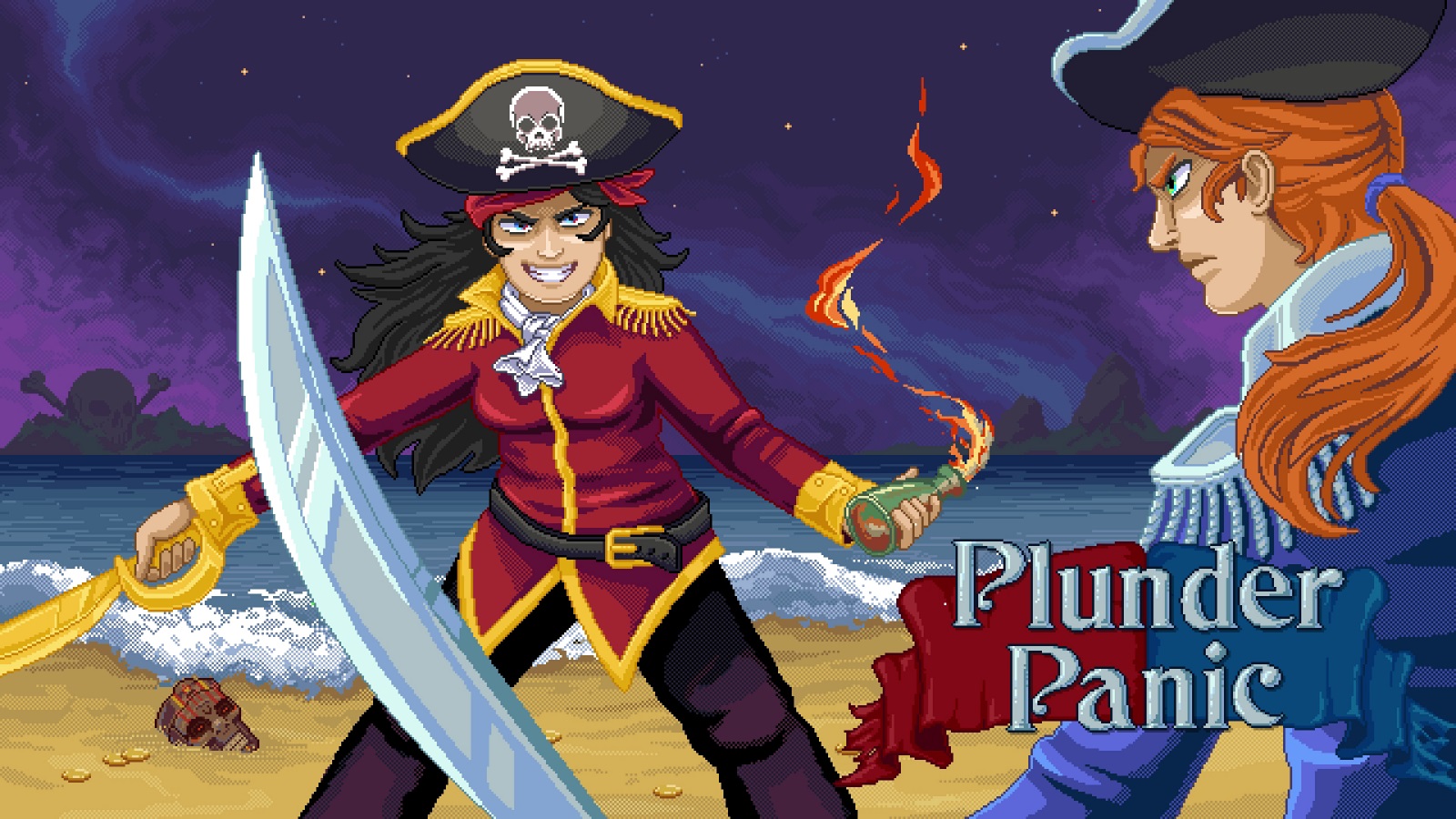 Gaming Trend got the exclusive early scoop with Will Winn Games’ announcement of Plunder Panic, which will hit PC on September 17. We had a chance to speak with Executive Producer Will Jeffery on development of the title as well as Michigan State University’s GameDev program.

Thanks for giving us the scoop about Plunder Panic today! How do you feel now that the game is nearing its full release on PC?

We’re super excited! We’ve been working on this game for quite a while and are eager to get it into the hands of players! We’ve mostly been able to show off the game at conventions and expos (prior to COVID), but haven’t been able to sell copies until recently. It’s a pretty big milestone for our team. 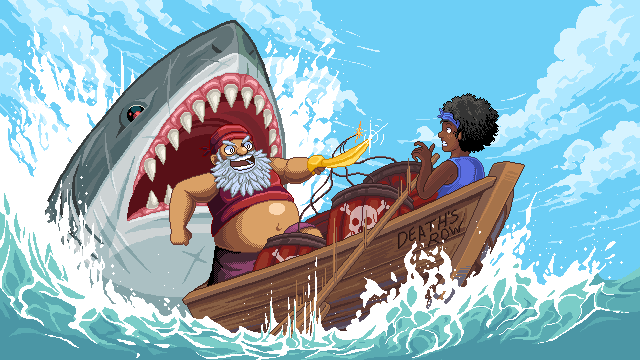 It’s been cited that this game is similar to Duck Game, Nidhogg, and Killer Queen Black. What were your inspirations for Plunder Panic?

In general we took a lot of inspiration from the classic Nintendo games we grew up with, other indie hits like Tower Fall, as well as the titles you mentioned above. We even drew inspiration from several films, like Pirates of the Carribean and the Princess Bride.

We wanted to create something that brought back the couch co-op days of gaming. The days where you’d hang out at your friend’s house after school, playing video games on their couch. Many of us have fond memories of these times, spending (too many) hours gaming, laughing, and having fun together in-person. Plunder Panic embodies those feelings and is a ton of fun to enjoy together! 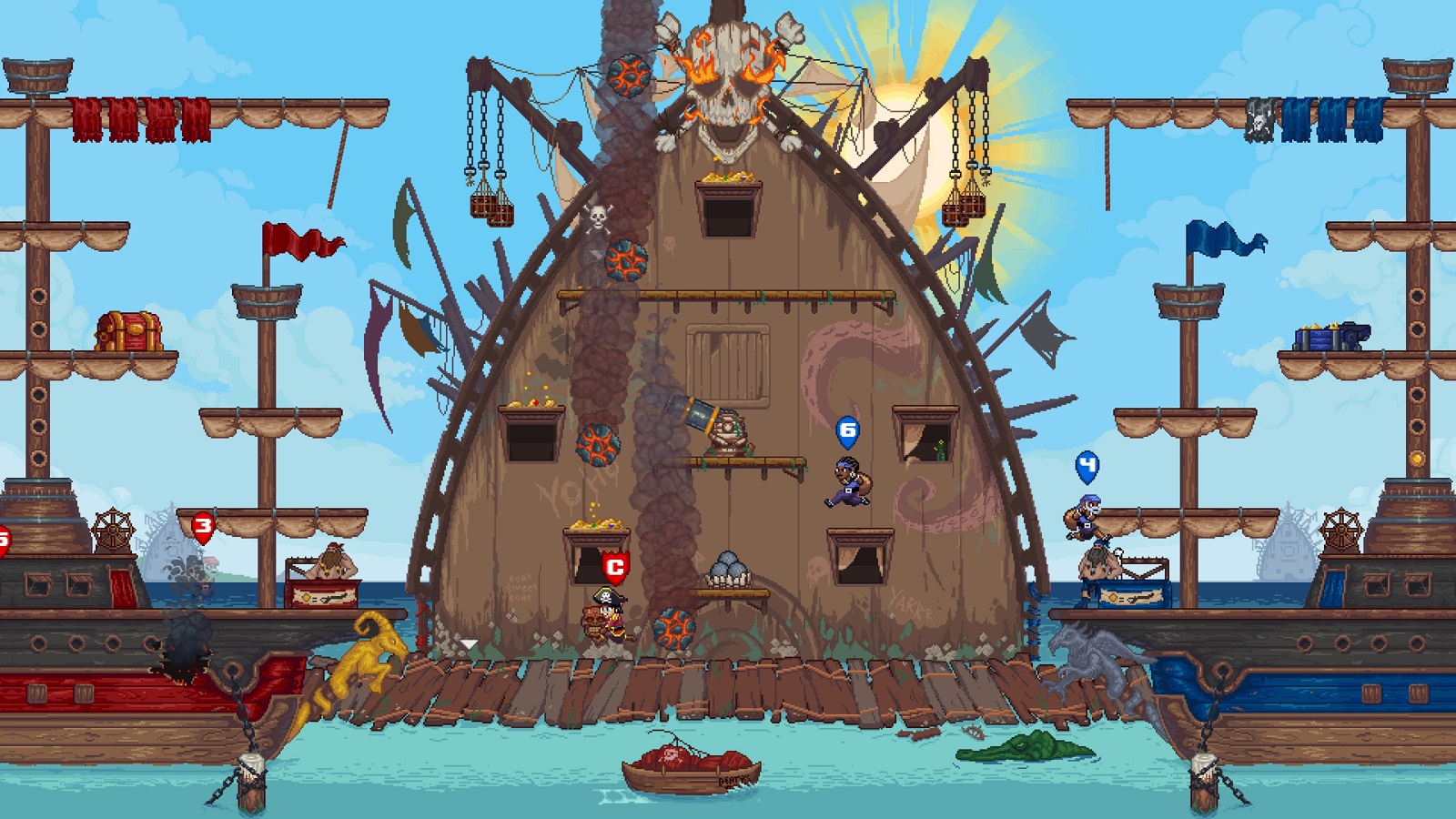 The previously mentioned games, while online hits, are also great couch multiplayer titles. Are there any differences playing a game like this in the same room compared to online?

Like most of those other titles, I think they truly shine with local multiplayer. There is something about being in the same room with your friends, screaming at the TV, laughing, jumping up and down… those are moments that are hard to replicate online. You can get closer with a Discord or Zoom call with all your buddies, but the energy isn’t quite the same.

Plunder Panic started out as a massive 6v6 arcade cabinet, so there was a definite spectacle and energy to playing with a big group in the same physical space. You’d see players peek around the other side and taunt the opposing crew. There’d be shouting matches and pirate lingo being thrown back and forth! I think couch multiplayer helps capture that original arcade feeling we created.

With that said, the gameplay itself will play identically either local or online multiplayer.

National Talk Like a Pirate Day will be a couple days after the PC release. Was the timing intentional, or do you just like talking like a pirate?

Definitely intentional, matey. What better way to celebrate Talk Like a Pirate Day than Plundering with your crew on the high seas? Well, aside from having some rum while you play, of course.

12 players on the same screen can feel hectic! What influenced the decision for this player count?

We named it Plunder Panic for a reason! We wanted to create a game that had a sense of chaos to it, that really encouraged teamwork and cooperation to succeed. The biggest local multiplayer game we could find was 5v5 at the time, so we said “let’s do one better, why not try for 6v6?”. Plunder Panic can be played anywhere from 1v1 all the way up to 6v6, so it really works for any number of players. We really think the game shines with more players, though. 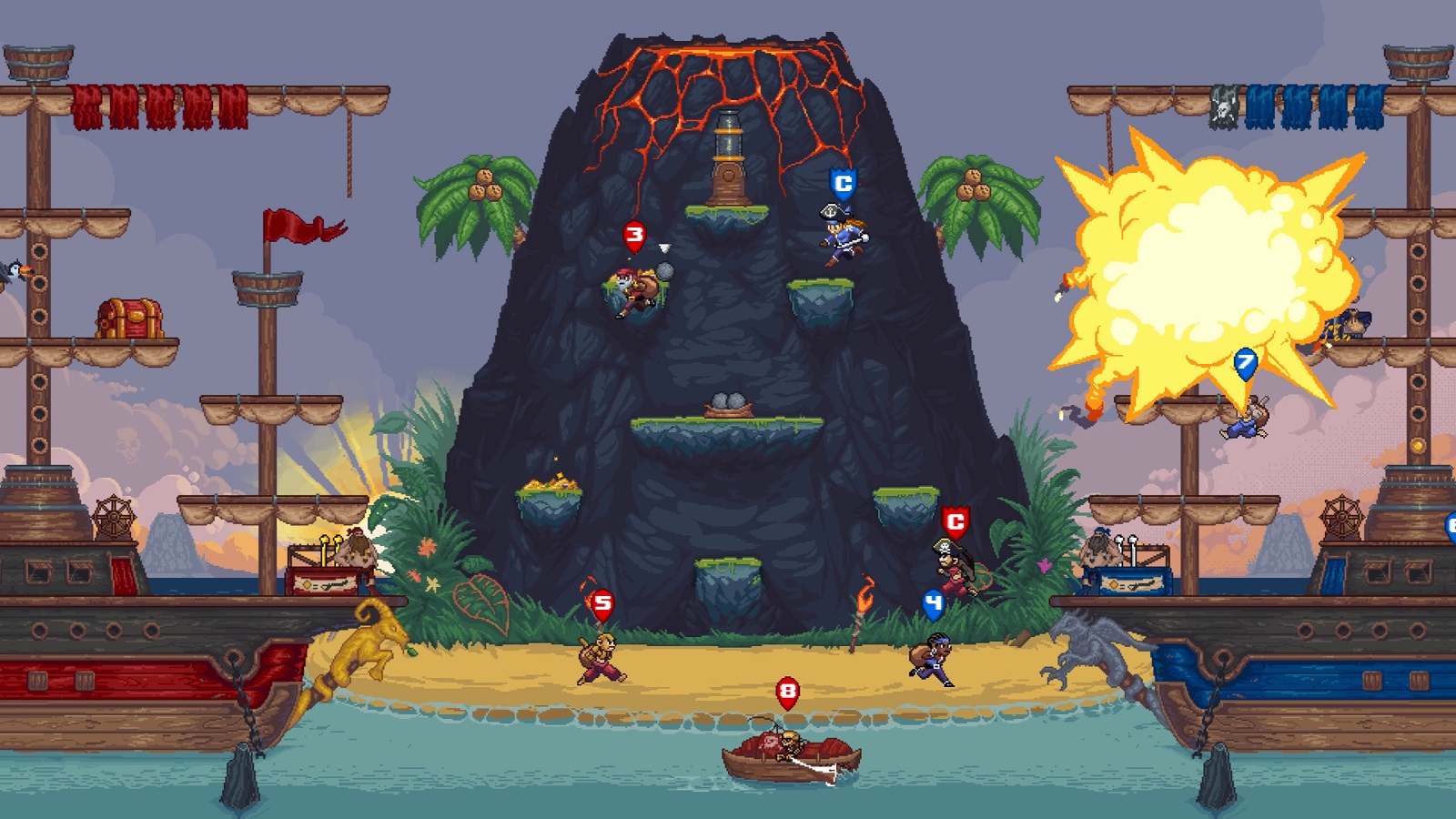 What is something in Plunder Panic that you want everyone to check out?

I really love the items in the game. I think they are a ton of fun to use and can really change up the strategies of a match. The Rum Barrel might be my favorite. Take a swig of rum and your pirate will move extra fast, but the left and right controls are reversed! 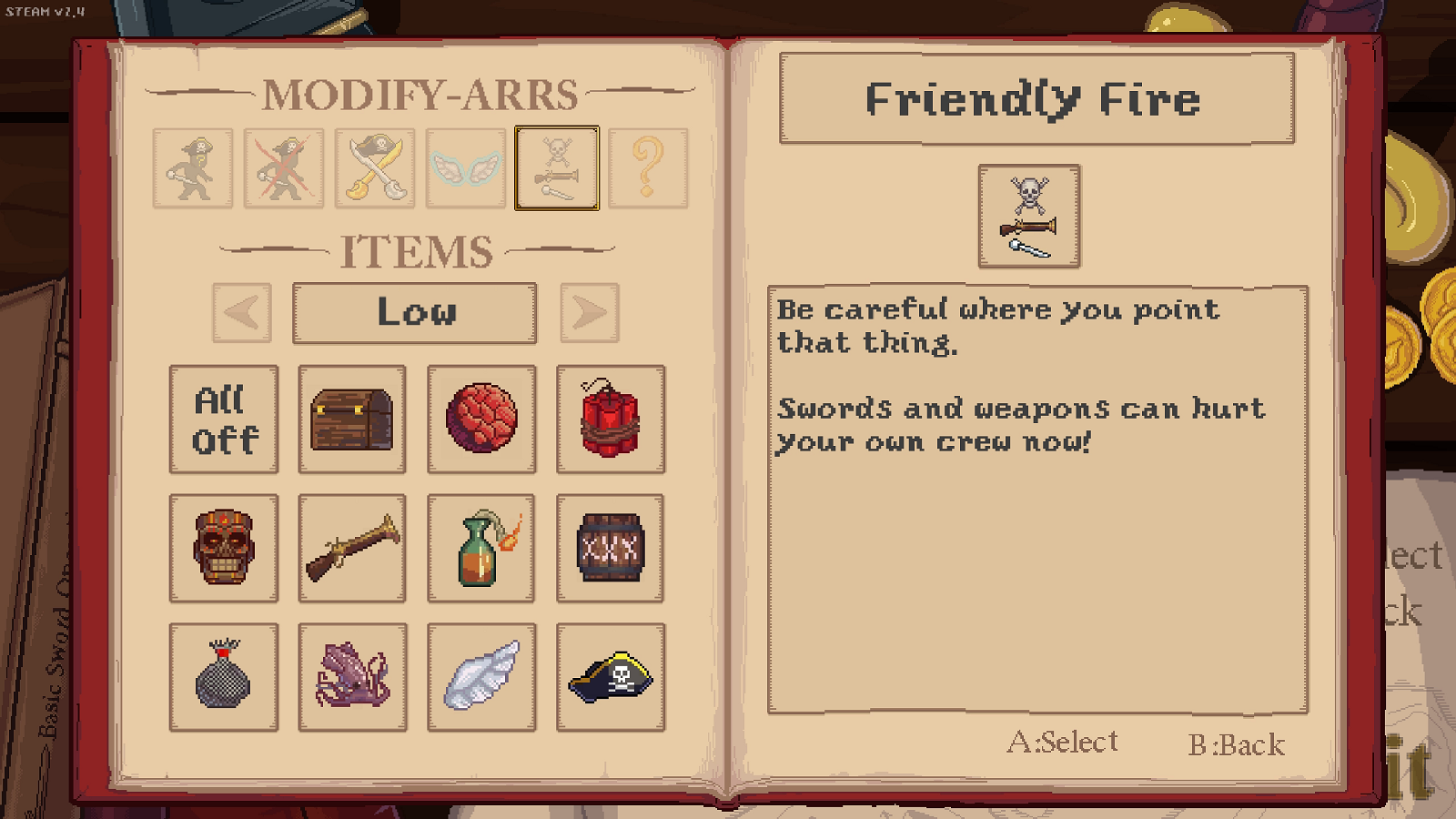 Let’s talk about funding and development of the game. Were there any challenges in the cost of developing Plunder Panic?

There were definitely some challenges along the way. Plunder Panic started out as a passion project in the Games for Entertainment and Learning Lab at MSU, where we had a little bit of funding to create a small game for an event that we were hosting at a film festival. The game ended up being super popular at the event, so our team just kept working on it here and there. Eventually, we went to game expos and conferences and won some awards, creating a bit of a following of players that wanted to get their hands on the game.

Ultimately, our team spun out of MSU and created Will Winn Games, where we officially licensed the game from MSU so we could continue development and prepare it for commercial distribution. We’ve had some success with early seed rounds of funding, with some folks who really believe in the game and what our company is trying to accomplish.

This game came to be thanks to the Michigan State University’s GameDev program. Could you tell us a little more about what the program was? 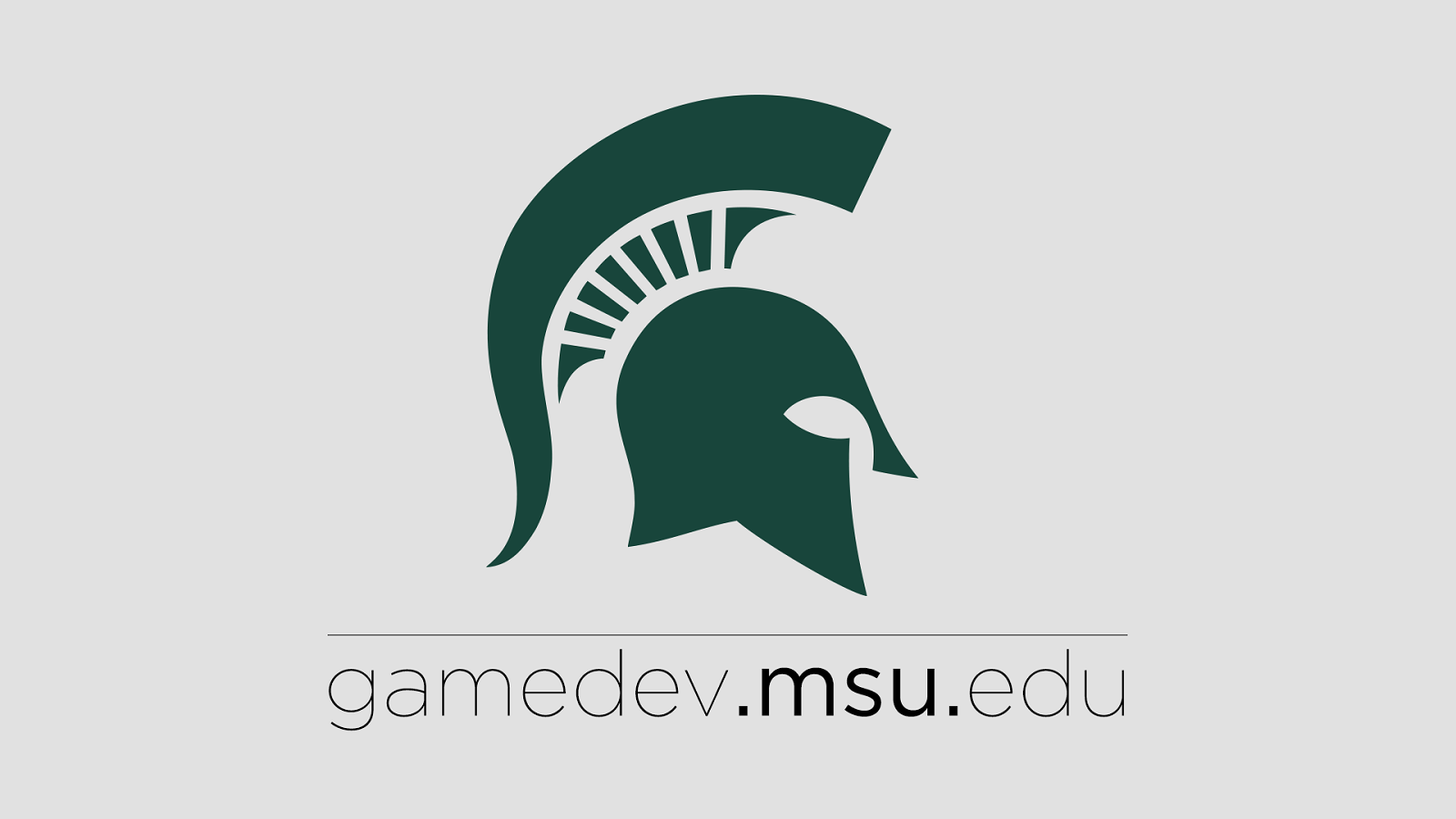 MSU has put together an awesome team of developers and educators, with a curriculum focused on developing multiple high quality games over quick time periods. By the end of the program, students will have a portfolio of games under their belts, alongside experience working with real game studios who mentor teams along the way.

How important do you think having a university game dev program like Michigan State’s is when developing games as a student?

As a graduate from the program (both undergrad and grad), it was a huge leg up for me to attend MSU. I didn’t just learn theory and techniques, I had to actually make games with other students. I had to deal with deadlines, with clients, and got a taste of what actual game development was like before entering into the workforce. That really gave me perspective on the process, and helped me identify my role on a team and strengths as a developer.

What advice would you give for a recent college or university student that wants to take up game development?

Join game developer communities, find other people who love making games and work with them! Make as many games as you can, and don’t worry if they don’t all work out. Failing is an important learning tool that people are too often afraid of. We learn so much from bad ideas and concepts that don’t work out. It’s all part of that iterative process. Figure out why something isn’t working, learn from it, and make it better next time!

As a University of Michigan alum, I have to be a bit of a rival here, haha! What’s your favorite part of Michigan State University?

As long as we aren’t talking about sports, I think we can have a pretty civil rivalry. I hold a lot of love for MSU and the GameDev program, but I’ll venture a little off the beaten path here and say the MSU Dairy Store is one of my favorite things about campus. If you haven’t been there, you’re missing out on some of the best ice cream you can get in the US. 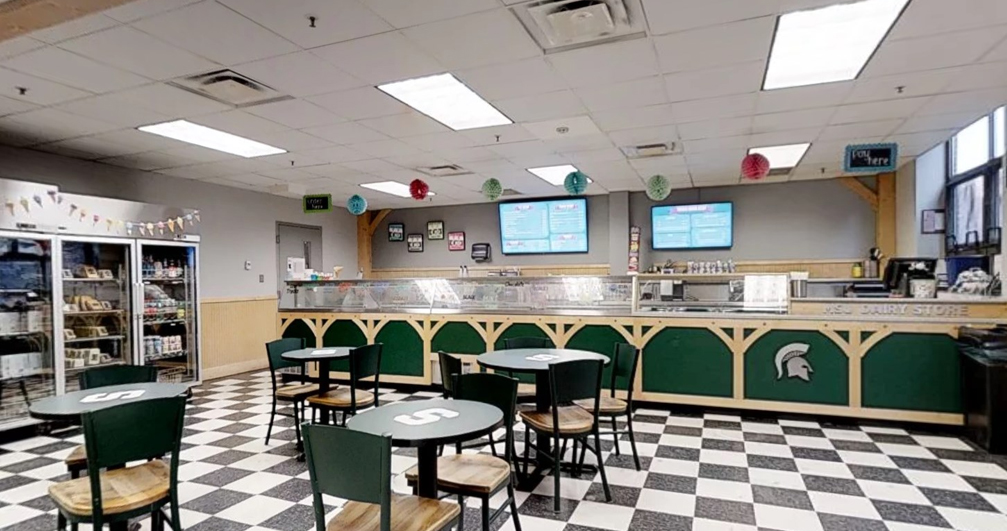 Even as a wolverine, I must admit the State Dairy Stores are delicious. – Elisha

Where can our readers follow you for future updates on your projects?

Great question! We’d love for your readers to join our Discord, it’s a great place to chat about Plunder Panic, our future projects, and interact with the development team. We also post weekly on Twitter, Instagram and Facebook. Our website – http://plunderpanic.com, as well as http://willwinn.games – are other good spots for finding updates.

Finally, any last words you’d like to give our readers? Perhaps any music recommendations?

hope that you give Plunder Panic a chance when Early Access hits next month! If you could Wishlist us on Steam that would really help us! We’re also launching the game on all the major consoles early next year. Developing this game has been a labor of love, but we think we have something special and can’t wait for you to play it.

As for music recommendations, one shameless plug is to check out the latest musical track from Plunder Panic…or some pirate metal from Alestorm! For the non-pirate variety, one of my favorite metal bands is Trivium, and it’s rumored they’ll be releasing some new music later this week…be sure to check them out! 🤘

You can wishlist Plunder Panic on Steam in anticipation of its September 17 release. Stay tuned for more news here on Gaming Trend.