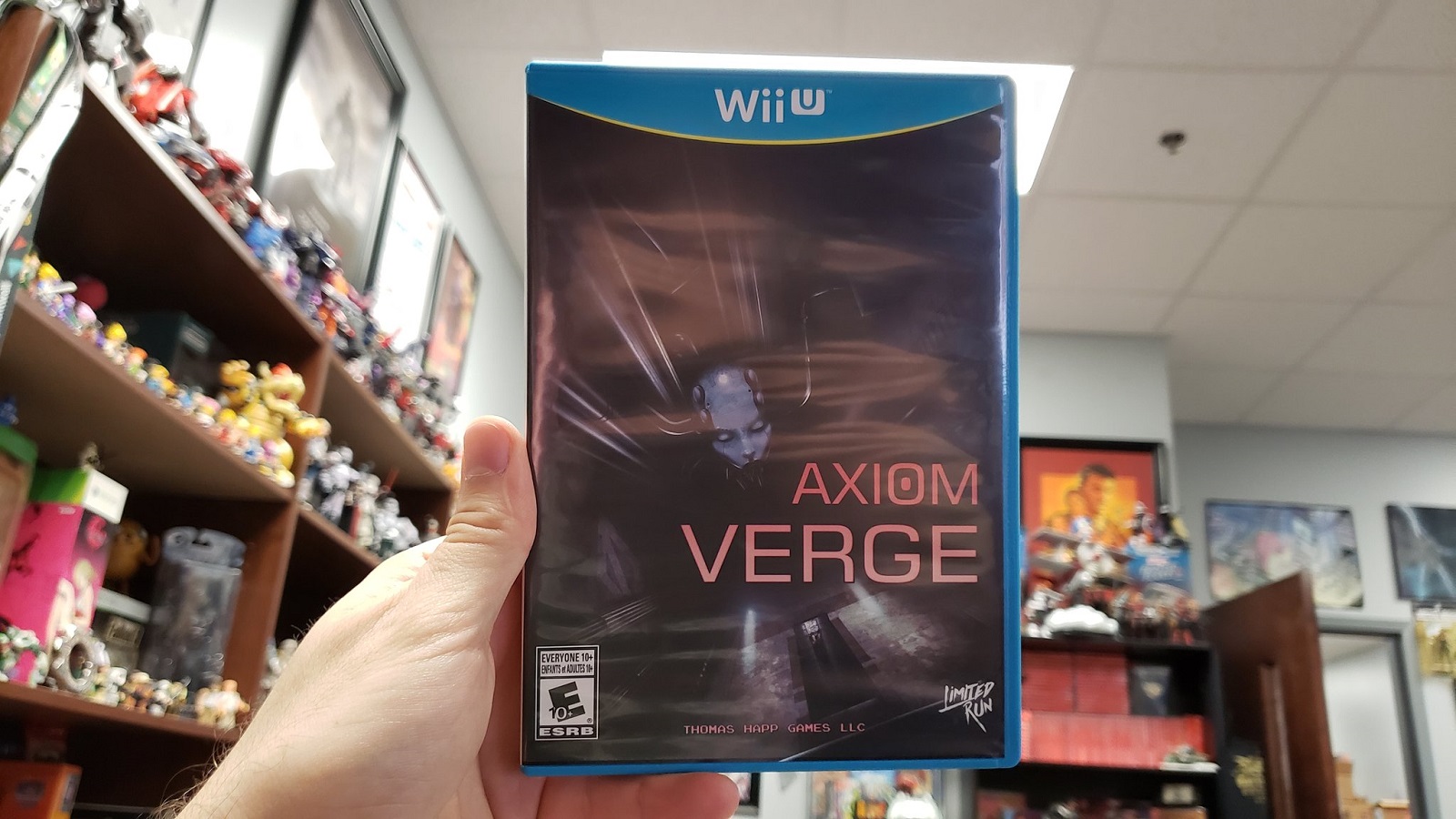 Announced last week, independent publisher Limited Run Games announced that it will release the Wii U version of Axiom Verge physically on March 29. However, a recent article posted by GamesIndustry.biz highlighted the company’s troubles with BadLand Games, as the latter had not kept their end of the bargain in terms of the physical release and production. We got to ask a few questions to Limited Run Games CEO Josh Fairhurst regarding the various hurdles regarding the eventual release of Axiom Verge’s Wii U version, as well as a few other questions about the company’s future. 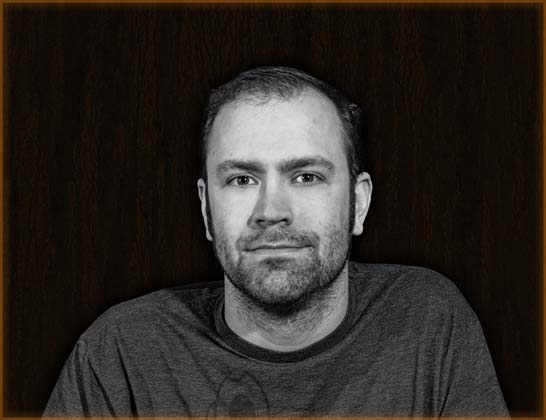 So BadLand Games approached you with the initial offer to publish the physical Wii U version of Axiom Verge. What were some factors that made Limited Run Games accept the deal?

I really wanted to release a game on Wii U and this seemed like the perfect opportunity to be able to do that. Honestly, the deal terms we accepted were really bad so I shouldn’t have accepted in hindsight.

You’ve said in the GamesIndustry.biz article that you’d be lucky to recoup even a third of the costs with this release. Would there have been a way to recoup a bit more of the losses from increased sales?

We could have asked Tom and Dan [Axiom Verge’s developer and producer] for a better split on the revenue for this to help recoup our losses, but that didn’t seem right given that they’re also in a similar boat with BadLand Publishing. 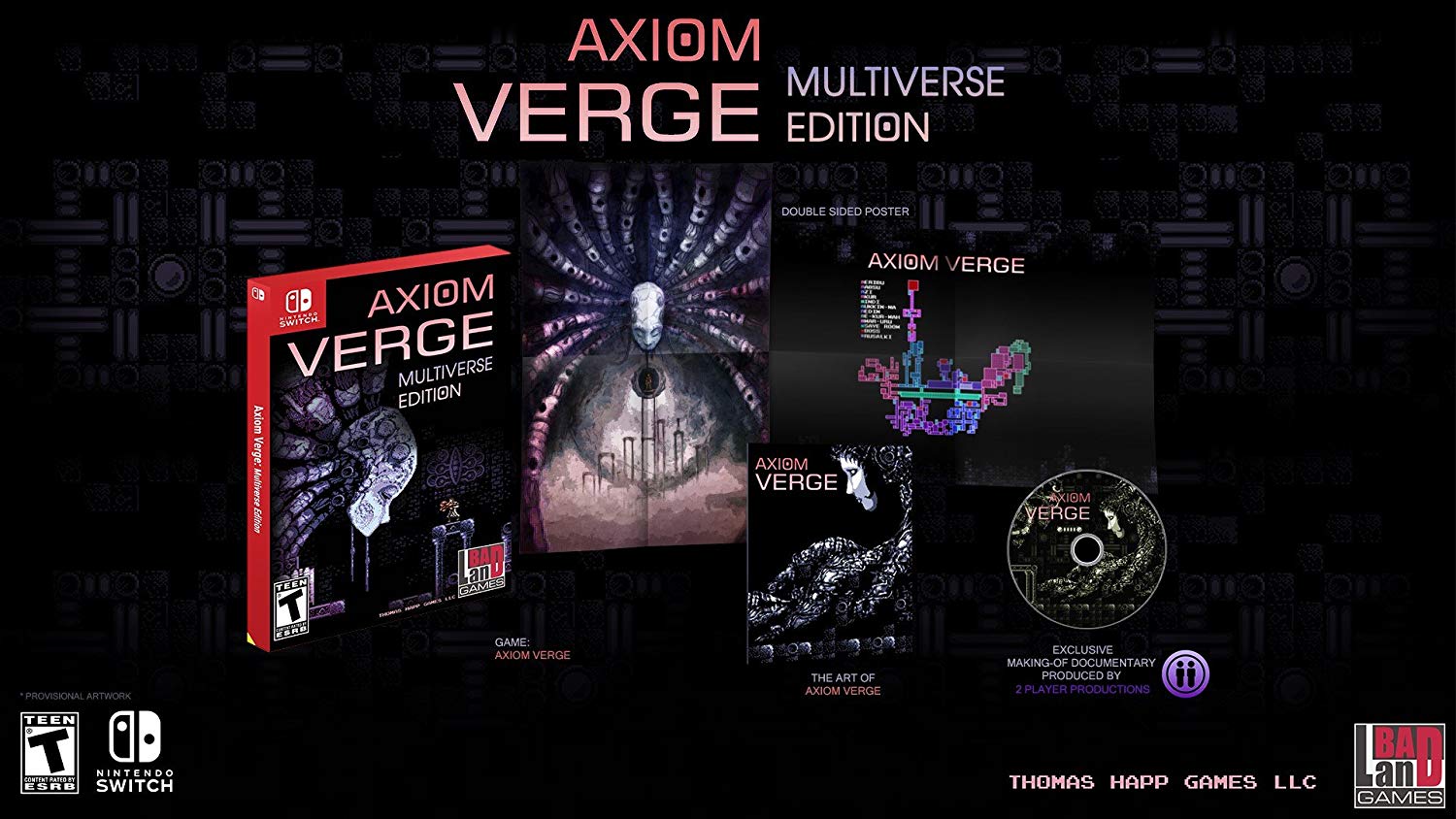 In spite of the deal’s fallout, have you ever considered additional Wii U titles to receive the Limited Run Games treatment?

Absolutely – we’re big fans of Joakim Sandberg (Iconoclasts), so we would love to be able to eventually release his previous game Noitu Love: Devolution on a disc.

You’ve also released the physical PS4 version of Everspace, which was formerly slated to be released by BadLand Games. Could you shed some light on how your partnership with Rockfish came about?

The only thing I know is that their deal with BadLand did not work out so they came to us to make sure the game still got a physical release. This was all unrelated to our legal battle with BadLand Publishing.

It seemed at the time Axiom Verge struggled to pass Nintendo’s Lot Check procedures, causing a bit of a delay. Have these checks caused significant delays in your products?

We’ve had far more issues with Sony certification than Nintendo; however, the one time I tried to submit a game in to Wii U lotcheck (for Breach & Clear – which was fully ported to Wii U), the game failed for some pretty non-specific issues and we had to give up because we couldn’t figure out how to address them. 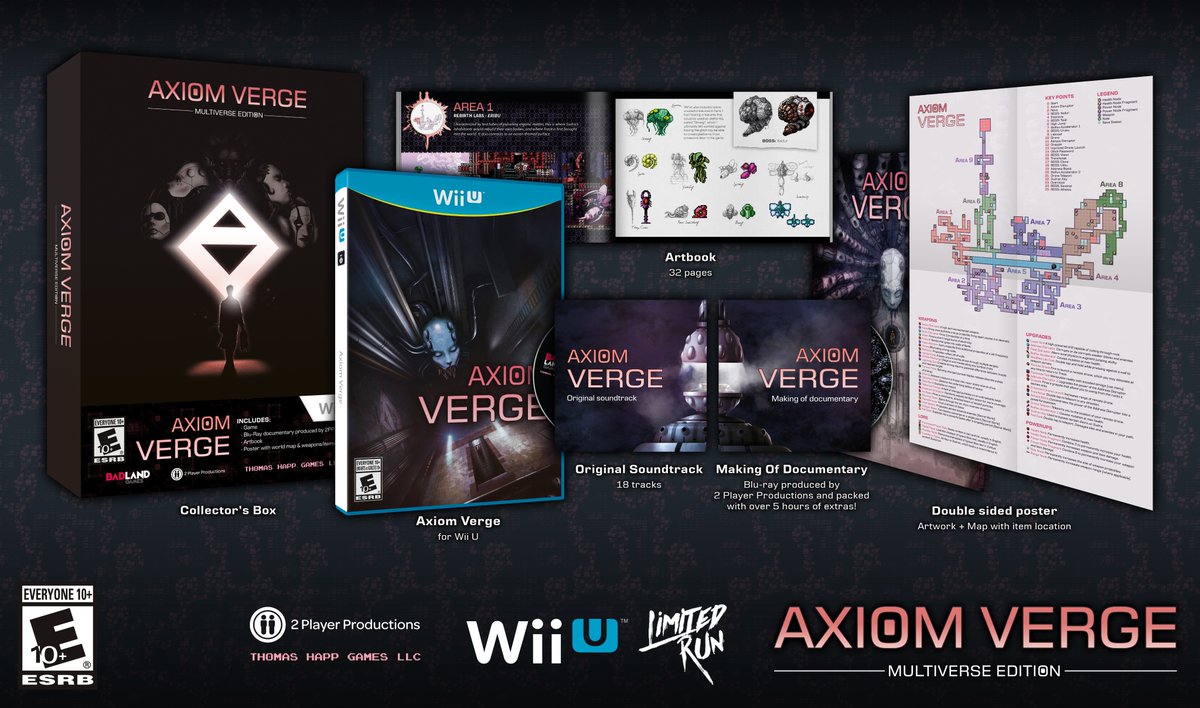 The version of Axiom Verge’s Multiverse Edition that will be offered later this month.

Do you have a ballpark number on how many copies will be available when the game goes on sale later this month?

There will be 6,000 copies available.

What was the reasoning for paying for the Wii U discs a second time?

We initially sent $78,000 to BadLand games to cover the entire cost of the Wii U run. Our expectation was that we would receive 6,000 ready to sell “Multiverse Editions” of the game on The Wii U. We never received those (nor our money back). Once the rights to the game had reverted back to Tom Happ and Dan Adelman, I was able to pay Nintendo directly for the game discs.

Have the Axiom Verge troubles cleared up, or are there still more loose ends to tie up concerning the case?

We have not been paid back for the $78,000. BadLand’s CEO, Luis Quintans, has stated multiple times now that he is willing to pay us back. I plan to reach out to him again to see what course of action can be taken. I plan to let the community know when the debt has been resolved. 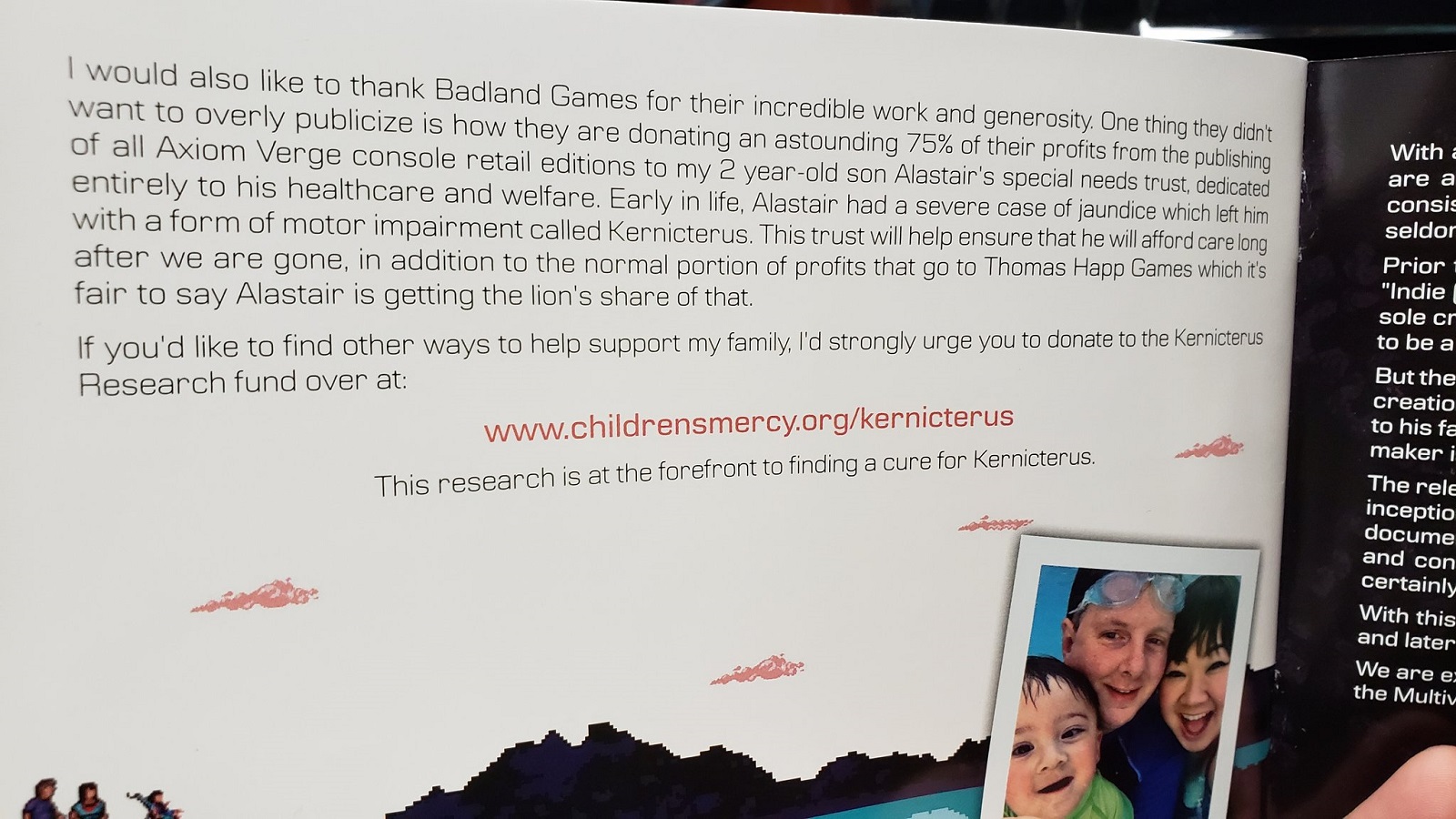 A dedication from the original Axiom Verge booklet.

Limited Run Games surprised everyone with a physical PlayStation 3 release of Oddworld: Stranger’s Wrath last month. Were there any risks or hurdles publishing for that console?

The big risk was not knowing if demand existed on the platform and the big hurdle was figuring out how to do a physical PlayStation 3 release. The release was a big success so there did not end up being much of a risk!

With the PlayStation 3 releases, it seems like anything’s possible for you all, so just wondering: What would be your dream console to release an LRG title?

Dreamcast – but the release would need to be officially licensed!

The company has stated that the lineup for PS3 will be, “Small but mighty.” Do you happen to have any hints of upcoming releases? (To be quite fair, I wouldn’t mind a Mighty No. 9 release, regardless of the negative reception of the game.)

Unfortunately I don’t have any hints (we only have one other game at the moment and it’d be real easy to spoil). Sorry about that! 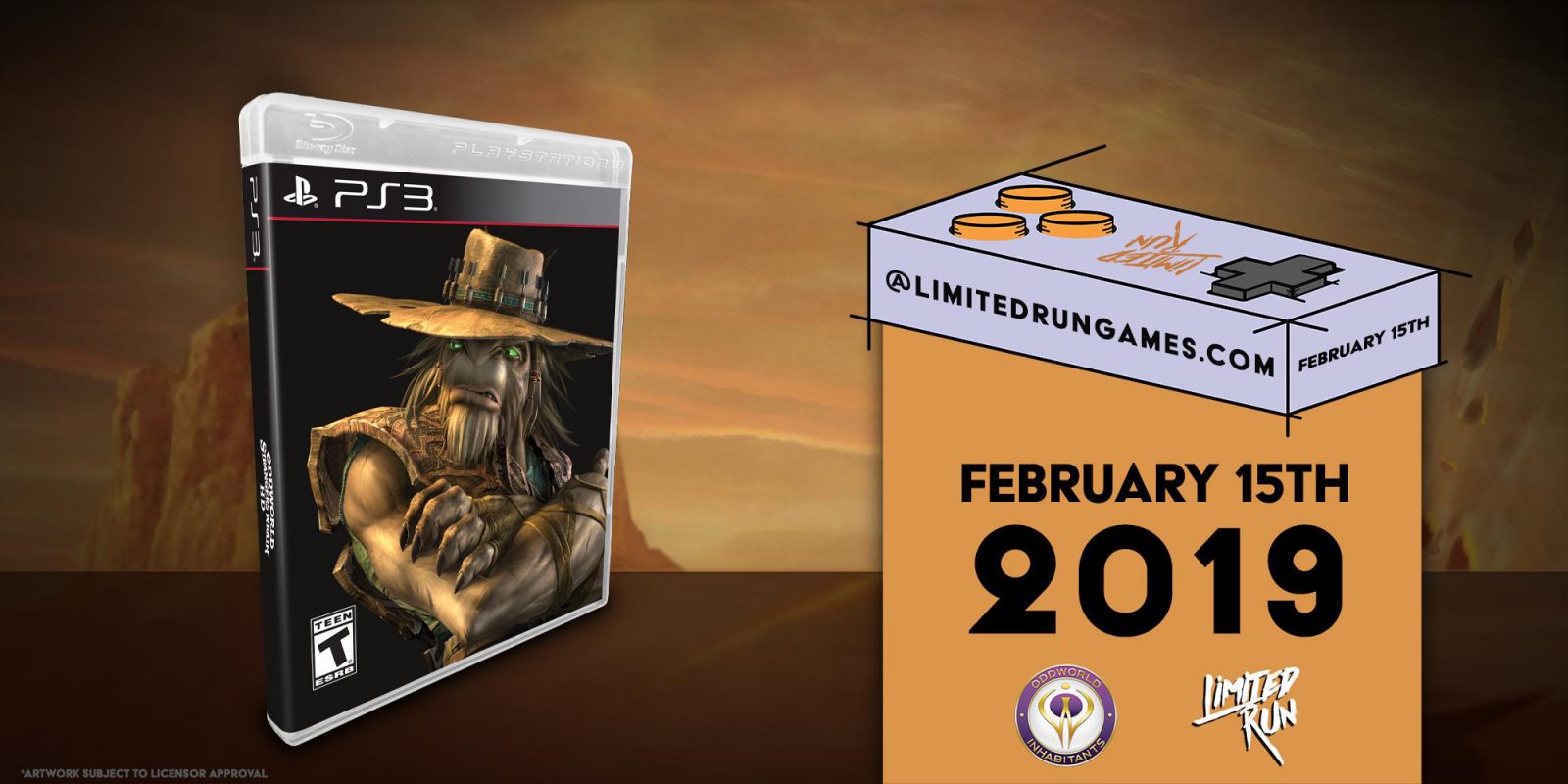 With PlayStation Vita hardware and physical cartridge production being discontinued, where will Limited Run Games focus their efforts in the coming months and years?

We really just want to try out new platforms to try and fill that void – PlayStation 3, Wii U, and 3DS. Maybe even Xbox One…

Finally, any last words for our readers?

Thank you to anyone who has ever purchased a game from us! We really appreciate your support – we’re nothing without you!

Axiom Verge’s Wii U physical version will be available on Limited Run Games’ website on March 29. In the meantime, you can pre-order your copy of ToeJam & Earl: Back in the Groove and Bloodstained: Curse of the Moon today. Check out our review of Axiom Verge, and stay tuned for more news here on Gaming Trend.