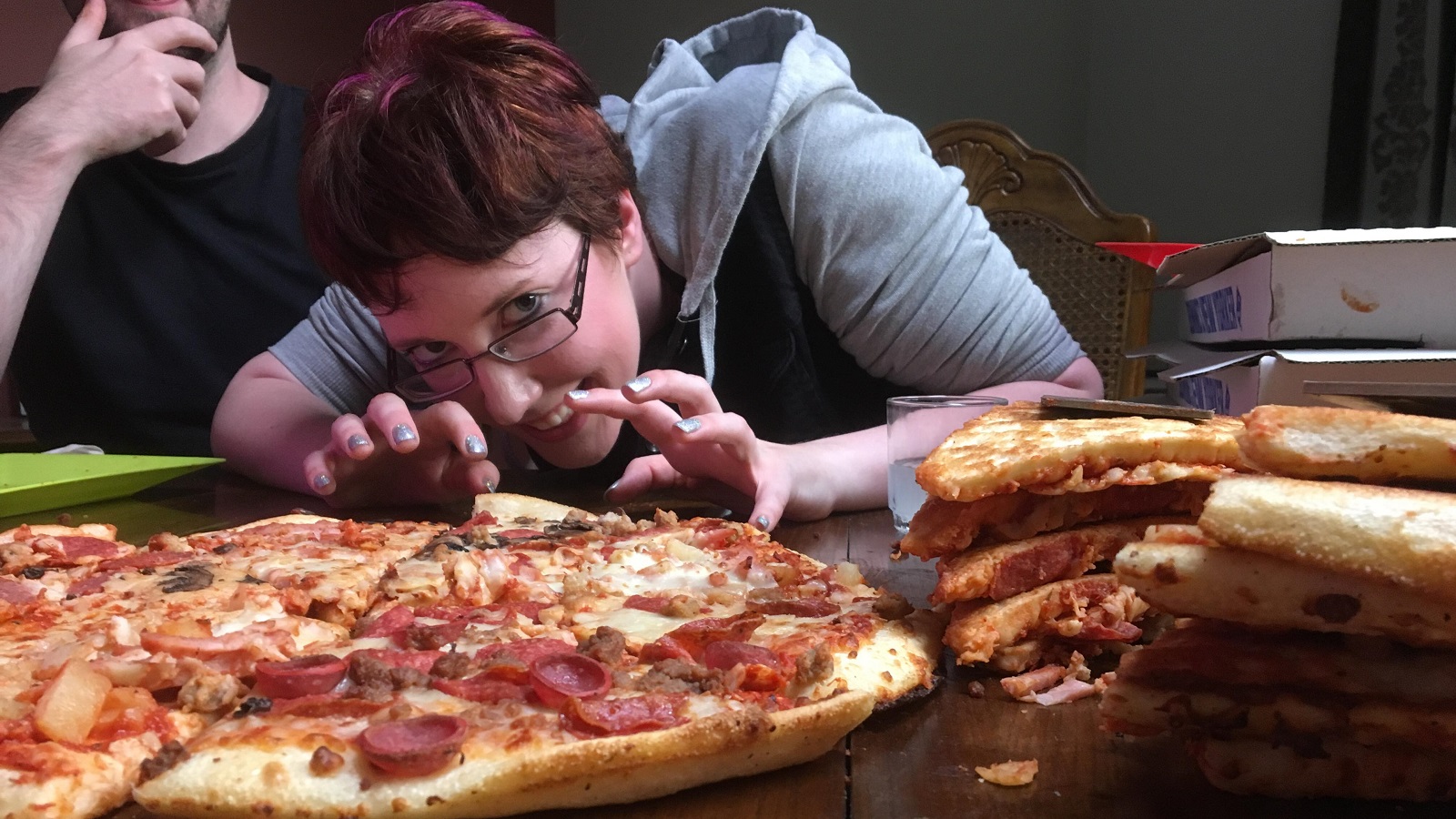 We’re busy people, and sometimes we don’t have time to play games after we eat. It seems that Bézier Games has caught on to our need for food and fun, and has created New York Slice Legacy in order to become the best game you can eat. We got to chat with Ted Alspach and Jeffrey D Allers to talk about development of this scrumptious new tabletop game.

New York Slice Legacy at its most chaotic.

What was your inspiration for this cheesy new title?
Ted Alspach: When you play the regular New York Slice game, you invariably get hungry…for pizza! Often times while playing the game we’d order pizza, and keep playing while the pizza was delivered and we ate it. It’s not hard to grab a slice of pizza from the “real” pizza box, look at it, and realize that it could be the tiebreaking slice for a set you’re collecting. Then it just kind of fell into place after that.

What swayed your decision in representing New York style pizza rather than the (obviously better) Chicago style pizza?
NY and Chicago pizza are really two different foods. Both are fantastic, but the high concentration of cheese in Chicago style pizza would have made the box too heavy to ship economically. Besides, when I go to Giovanni’s in Chicago, I don’t want it to be super crowded because everyone wants to play a legacy game there instead of a NY pizza joint.

What do you think separates New York Slice Legacy from other award-winning pizza simulation games in the tabletop market today?

New York Slice is that great combo of accessible gameplay and light strategy, with a side of whimsy. That’s right, whimsy.

Look at that whimsy! Look at it!

New York Slice Legacy is designed for two to four players, but will you release a single-player variant in the future for those that don’t want to share?

New York Slice Legacy Shame Expansion is currently in development. The idea is that you’ll need to need to eat the same amount of pizza that four people would, while acting like you’ ordered the pizza for a group, and not just for yourself. If you can convince yourself that all that extra pizza you ate would “have gone to waste if I hadn’t eaten it”, you emerge victorious, not to mention several pounds heavier than before you started playing.

Speaking of the legacy format, this game is designed with freshly made pizzas in mind. Are there any alternatives for those that can only find month old pizzas, or is store bought fine?

Jeffrey D Allers: We worked hard to make the game compatible with any kind of pizza, whether it comes from your freezer, a delivery service, or is made in your own kitchen. We encourage the players to be creative and give it a personal touch. For example, calzone would be unheard of in the original board game, but with the legacy version, that kind of out-of-the box thinking is encouraged.

The legacy format is a great way for players to weigh their choices when playing their favorite tabletop games. What’s different here from a regular styled New York Slice game?

A lot of people don’t appreciate greasy snacks at the gaming table, but New York Slice Legacy IS a greasy snack! It’s probably best to play it as an end-of-the-evening closer, though.

If you could date any pizza topping, which one would it be?

Well, I do date my wife, who, like Italian salami, is smart and spicy.

You’re announcing that New York Slick Legacy will debut at this year’s Gen Con. Are you planning on hosting any events for the game?

I think Ted is rolling out a jumbo-sized demo version, so that interested gamers can take a few nibbles without interfering with the replayability of the game.

But it will have to be in an enclosed room, because, as with all Legacy games, we can’t have any spoilers.

Finally, any last words for our readers? They would be fools to miss out on this new release!

Now it’s more than a filler, no other game can top it, and it doesn’t cost a lot of dough.

It doesn’t matter whether you win or lose, pizza is always great to choose!