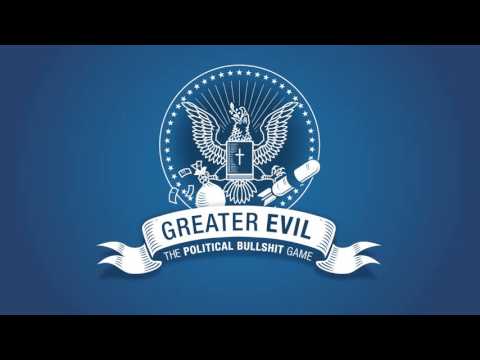 1. First off, please introduce yourselves and tell us a little bit about Burn Artists.

Burn Artists is a new, incredibly unprofitable LLC started by myself, Jacob Bofferding (writer), and my partner Shawn Roberts (illustrator). We originally met in the ad industry and formed Burn Artists because we were taking GREATER EVIL pretty seriously and wanted the LLC to solidify our partnership. We want Burn Artists to be known for pursuing crazy ideas and making extremely fun, unique games with incredible design unlike you’ll find anywhere else.

2. Before we really get started, can we all agree that this is the most depressingly entertaining election cycle ever?

Maybe. Everything is relative, and I wasn’t alive for most elections. Ronald Reagan’s “There is a bear in the woods” commercial from 1984 is certainly hilarious to me in present day. Plus we’ve elected many politicians in our past, including a President and Vice President, who shot and killed their opponents in duels. What could be more depressingly entertaining than that? Just imagine if Trump met Cruz in a cornfield with a couple revolvers right before Iowa Caucus. But, by recent standards, yes, most depressingly entertaining. The internet is a wonderful thing, but I think it had the effect of making any idiot and/or liar “qualified” to run for office. Every clown can find an audience. Just like we hope to.

3. Let’s check out the quick (and very entertaining) instruction video — are there any “house rules” or special ways to play that you’ve discovered through testing?

We’re suckers for making very deliberate, optimal decisions, and sticking to those. Of course, this is America. If you want to smoke some crack and play our game while making bets with liters of your own blood, power to you. But we’re not going to suggest it as another way to play. So truthfully, we’ve been through lots of ways you can play the game, with many rule variations, but we’re only going to promote what we settled on as the best. Although, to be a bit of a hypocrite, we may include an “advanced” play option with this version of the game. It’s not just about changing rules, though, it involves adding additional information to some cards that would be ignored in the classic version. It’s our final decision to make.

4. You recently did an update on the writing for the game — boy, that rollercoaster thing got dark in a hurry! Are the facts you’ve used without citation all generally true, or did you guys seek out the most eye-popping ones you could confirm?

The facts are all legitimate facts. Citing everything on the cards turned out to be too ridiculous from a design standpoint, but we picked facts that are very easy to look up and confirm. Google them and you won’t come up with competing information. We did intentionally pick some just for the shock factor, but we balanced that with some drier facts we just found interesting or surprising. We also chose several facts in pairs because they implied radically different things about the same issue, a right-wing take and a left-wing take, despite both being 100% true. Just to show how even facts can be used to manipulate.

5. I think we have a good idea who the Ass Hat for President could be, but can you give us some insight on who inspired some of your candidates? Is Ross Perot the Hungry Piggy? I think I see some resemblance.

You got it all wrong. Asshat’s resemblance to any candidate is purely coincidental. I mean, nobody in the field has an ass for a face. As for the other characters, overall they’re inspired more by classic political tropes than individual people. There’s a bit of Patriotic Pony in most politicians, even if a Sarah Palin might have a bit more inside her. Politibot 2016 represents the cold, calculated career politician who can keep reprogramming themselves with new positions and rhetoric as needed. You could say he’s a Hillary Clinton or Mitt Romney, and I wouldn’t argue either way. Whereas Megacorp and Piggy Banker represent the influence of big business and Wall Street on politics. There are forty presidential candidates in the game, and all of them have a similar explanation behind them, but we want to leave the rest as surprises.

6. Any chance we’ve got Cthulhu for President? I have a shirt that declares him as the Greatest Evil, so it seems kinda appropriate.

I actually came across the images of Cthulhu being the “Greatest Evil” after we had trademarked GREATER EVIL for our game. Using him crossed my mind for a second. But he’s such a decentralized character, used by everyone in everything, including other games, so it felt a little “me too!” for our taste. So, no Cthulhu. Funny enough, a different political card game launched on Kickstarter literally the day after us. It features all the real candidates from this cycle, like Clinton and Trump and Bernie, yet strangely they threw Cthulhu in there as well. So we’re pretty happy about our decision.

7. The lie system looks like it’s the line that crosses with the familiar game Bullshit or Liar’s Dice. Is that about right? Are there differences?

It’s similar in that there are penalties for being caught lying and for incorrectly accusing someone of lying. But the biggest difference is the gameplay around that mechanic. You could actually strip away the lying from GREATER EVIL and still have a fun, strategic game. That’s not the case with Bullshit or Liar’s Dice. We use lying to elevate our game but don’t depend on it for basic functionality.

8. If someone calls you on your lie, that’s when debate occurs, and gameplay becomes “unrestricted” — can you expand on how that works?

Lies and debates are separate things. Basically, you’re playing toward a single goal all the time: play enough cards to win a Backer and its points (for example, “Billionaires”). You accumulate cards in front of you over several turns that you’ll eventually turn in to claim a Backer. Lying can help you play more cards toward that goal. But if you’re called out on a lie, the cards you played go to an opponent and help that opponent, who may or may not be after a Backer you had your eye on.

Debates come into play any time a Backer is claimed. Everyone else at the table has the opportunity to debate for it to steal it, which basically means you’re betting you can catch up to and beat your opponent within two rounds. Play is unrestricted in that cards are played face up and anyone in a debate can play “lie” cards openly with no penalty. But lose a debate and you lose all your cards.

9. I’m shocked you’ve not gotten a backer that has signed up to have themselves immortalized in the game. Aren’t you worried that you’ll end up with a backer that’ll greatly overpower other candidates, or are you going to place some guard rails around that reward tier?

We have two ways to immortalize yourself in the game. The first one is the $300 tier, where Shawn will draw a custom illustration of you as a candidate for President. But, this is for your game only, nobody else will ever receive it. Because of that, we’ll offer guidance but no restrictions around the power. It’s your own personal card, after all. Make it read “Automatically win the game” if you so desire.

The second way applies to all games, and it isn’t a reward tier. Rather, we’re looking to whore ourselves out like a real politician and give one brand or product a sponsored card in the game. Whoever makes the best offer for free advertising. Now, it’s true the resulting card may be overpowered, but it’s a bonus Candidate in addition to the other 40. Using it is optional.

Step 2 – Lure those backers with lies, pandering, and bluffing.

10. After your inevitable success of this Kickstarter, would you be interested in providing expansion packs as we slog through the painful election carnival of this year?

Oh man. We love the faith, but to be clear, it’s not for sure an inevitable success. We’re happy with the progress, but I’ve seen great Kickstarter campaigns fail from a similar position. So, if you’re reading this, we need your support. Give us all of your money. Right now. We’ll wait.

Sweet, thanks for the cash! On expansion packs: no promises as of now. We’re really happy with the content and gameplay as is. We’ll potentially offer more in the future if enough people back the game and we come up with material that adds true value. If we don’t, it’s a great game as is and should stay relevant for elections to come.

Who’s got your best interests in mind? Not these guys, but they ARE for sale!

11. Would you be willing to have your cards made in China or Mexico just to make Trump angry?

Like all great American products, including Trump’s ties, this game is made in China.

12. Where can users swear their undying fealty, surrender their wallet-money, and learn more about the game? Also, when can we get our greedy paws on it?

Glad you asked. There’s no better place for all of the above than our Kickstarter page here.

We put so much thinking and effort into the game and are making sure it comes across with high-quality updates on the gameplay, writing and art. All of it is (or will be) on that Kickstarter page. We’re promising you’ll have the game by August, before the first general election presidential debate, but we’re also working hard to have it in your hands even sooner. Thanks for the support!