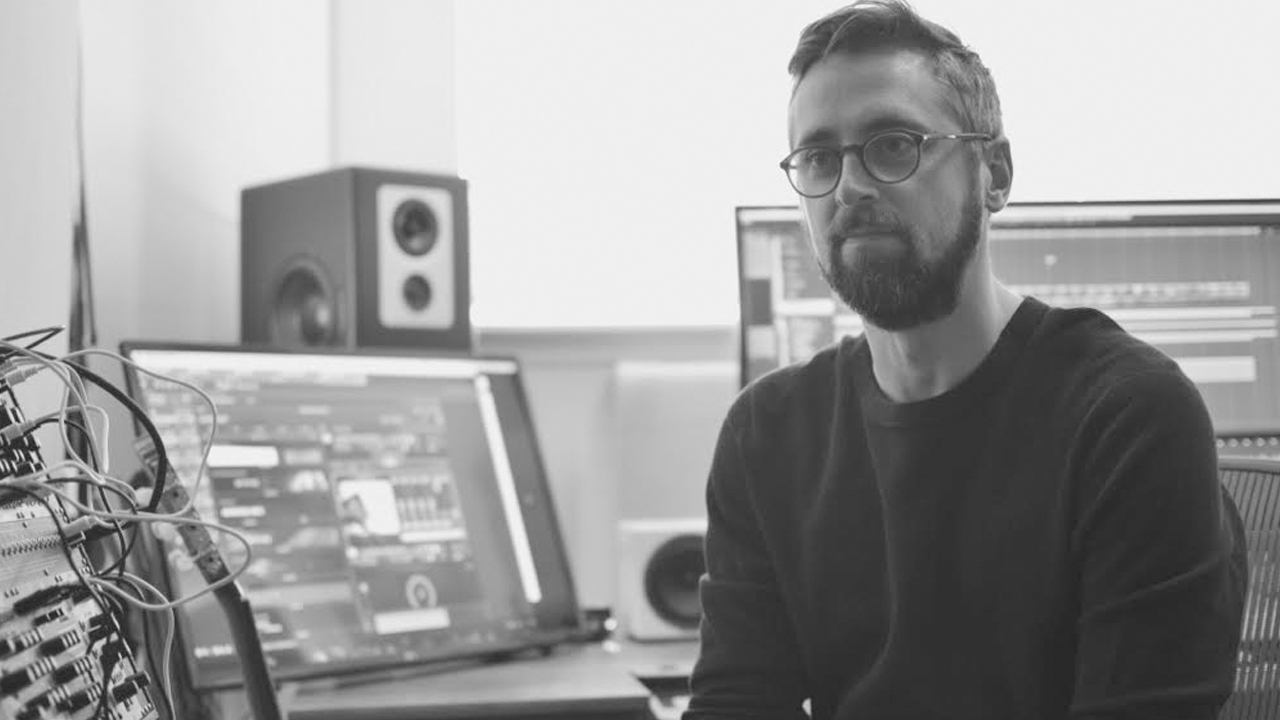 I recently sat down with Jon Everist, the composer behind several soundtracks from Harebrained Schemes, and at the start of a fresh new project for Disintegration. I wanted to hear about his creative fuel and how he builds such amazing and compelling musical scores to bring these games to life.

JE: Thank you! It tends to vary from project to project, but for scores like BATTLETECH and DISINTEGRATION, I rely on a mixture of live orchestral recording, digital samples, and analogue synthesis. I use a program called Cubase to record and produce the music cues. I typically start writing a piece by messing around on my piano, or if an idea comes to me when I’m away from the studio I’ll write it down or record myself mimicking the idea with my voice. After that I move to the computer and start to orchestrate the piece to get the timbre I’m looking for, choosing orchestral or digital instruments. I have a eurorack system I like to use for a lot of the music I write, I think it has a physicality that blends well with orchestral film-style music. After I’ve created a fully realized mockup of the piece of music I’ll then decide which parts of it I’d like to record with live players, which could be anywhere from me playing a part myself with some instruments I have lying around, or hiring a full orchestra to cover all of those elements. Recording anything with a live human tends to up the realism and emotional depth of a piece of music. Getting a piece recorded live involves a lot of steps and sometimes hundreds of folks including the musicians to help bring it to life. I’ll then take all those recordings, mix them into a final edit through a combination of plugins and outboard gear and then prep the piece for implementation. 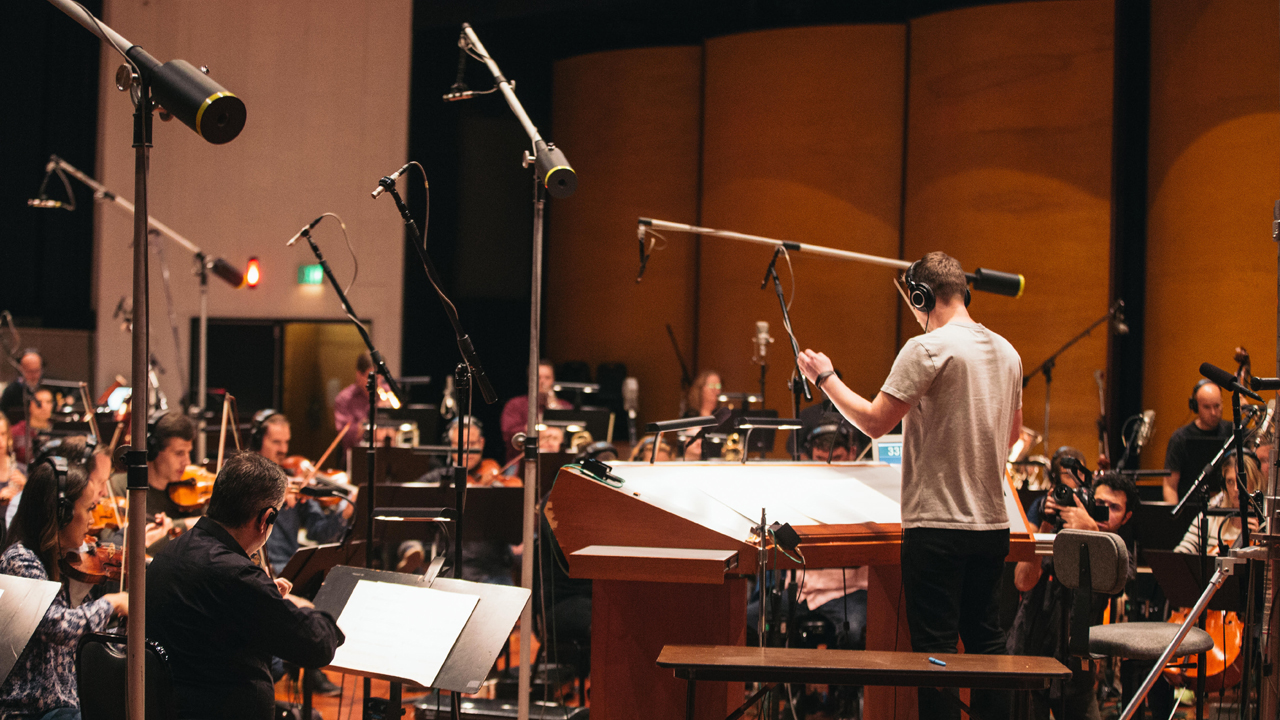 GT: What got you into composing work for videogames? Are you a gamer yourself? If so, what’s your favorite genre?

JE: Video games got me into music in general, and I do continue to play them. As a kid when I played games like Final Fantasy III or Chrono Trigger on SNES, I was completely blown away by the scores. I think video games combined tech and music together in a way that just clicked with me. I was pretty obsessed with producing music since elementary school, whether it be recording myself with a tape recorder, sampling orchestral music with my turntable, or making electronic music with my old ASR 10 sampler. I think the genre that spoke to me the most were role playing games. I ate up all the Squaresoft stuff (I loved the cinematic cut scenes with orchestral music) and also games like Baldur’s Gate and Fallout 1 and 2. I never realized that I could make a career out of scoring games, so I didn’t really pursue that until much later in life. Amon Tobin’s score for SPLINTER CELL: CHAOS THEORY was the first game I played where I realized that it might be something I could try. For some weird reason, I just never connected the two worlds of my love for games and my love for music. I think I believed it was just too far out of reach for me, since I didn’t have classical training at the time. When I went back to school for some training I had a real musical awakening and realized that my ear and writing voice had been pretty well trained all along, kind of like I was learning to write a language I had grown up speaking for most of my life. 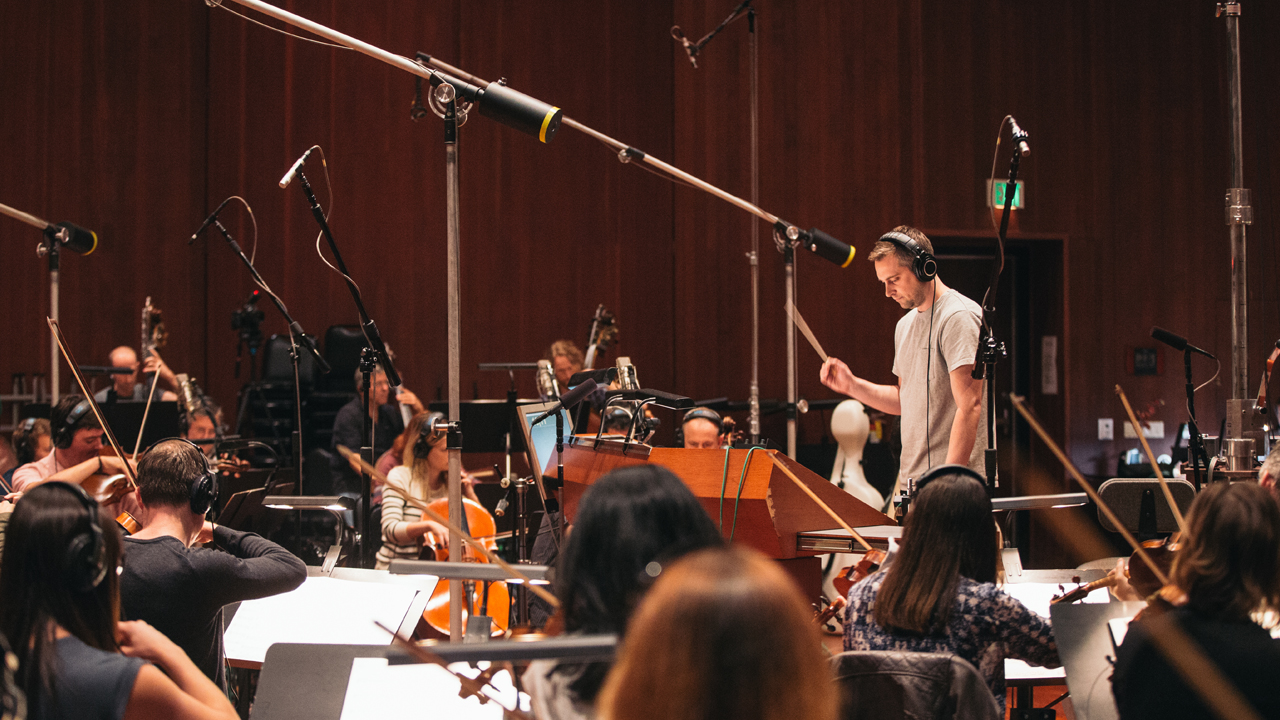 GT: Budapest is an amazing city — the Basilica and the various governmental buildings are some of the most amazing pieces of architecture I’ve seen traveling the world…but why travel all the way there to record your orchestral work?

JE: Agreed, I loved Budapest, and even though it was -20 at the time it was still beautiful to explore. We were lucky enough to take a dip in the hot springs and do a bit of sight seeing. It was really a magical time. Recording in Budapest is a bit cheaper than recording in other places in the US or UK, which is important for games that are trying to punch above their weight class in terms of budget and music quality. In my opinion, you really can’t beat recording in LA, Nashville, London or Seattle but places like Budapest, Macedonia, Prague and in any major city around the world has world class orchestras who do film and game recordings for a bit cheaper. I knew I wanted to get as much mileage as possible out of my recordings given the relatively small budget for live recording, so we chose Budapest to do that. They are amazing musicians and work in film and games all the time.

GT: This is your fifth collaboration with Harebrained Schemes — what was your process for Battletech and Battletech: Urban Warfare vs. Shadowrun: Dragonfall, Shadowrun: Hong Kong, and Necropolis?

JE: I’ve been quite lucky that they keep asking me back! We have a good creative relationship for sure. I think after all these years there is just a sense of trust there. They tend to give me free reign to compose music that I feel fits the project best. I’m still working closely with the creative team to present my vision for the music and make sure its in line with their over creative tone, but ultimately they are looking to me to set the palette up stylistically and they tend to trust my instincts. That relationship allows me a lot of freedom to take risks and not be bound by very strict creative prompts. I get very involved in the initial creative stages and absorb as much art and lore as I can, then I’ll present an initial demo and gauge their response. Some of my happiest moments happen when I present a client with a piece of music that was not what they expected but they end up loving it anyway – those moments tend to spark a creative symbiosis where the music feeds the creativity in another department, and then there’s a bit of a dance. The SHADOWRUN games were all done ‘in the box’, meaning I didn’t record any orchestra for them or live instruments beyond some self recorded material. Same goes for NECROPOLIS and the URBAN WARFARE expansion. I think, in general, BATTLETECH was just a bigger scale of a game that really called for a cinematic score. It was sort of pitched to me as “Game of Thrones in Space”, which really clicked with me. I wanted to write a space opera style score but with this feudal old school music bumping up against gnarly, gritty synths. With every project with HBS, they typically only check in with me after the first few cues are delivered to do a bit of course corrections, then they let me do my thing and make sure I’m on time and on budget!

GT: You have a new collaboration with V1 Interactive and Private Division in their 2020-slated first person shooter, Disintegration. Obviously this is a huge change from the tactical titles you’ve worked on previously — did that change the way you approached the soundtrack?

JE: From the framework of the style of game, not particularly. As usual with projects – I like to dive into the characters and story first and build on top of that. I will say though that with a 3D game, there tends to be a lot more interactivity and complexity involved. There are a lot more areas where a player can kind of break the way the music should be behaving if you’re not careful, but from a stylistic standpoint its still all about story for me. For BATTLETECH, most of the game is meant to be played in long protracted battles that could last 20 minutes or 4 hours depending on how you play, so I had to avoid making music that was too repetitive or ear-wormy and saved that sort of writing for the cinematics. For a game like DISINTEGRATION, I have a lot more freedom to score it similar to a film and rely on major themes and a suite of music because the gameplay itself is more cinematic. Myself and Jack Menhorn who is the audio director and lead sound designer there, designed a really useful music system in Wwise that controls the intensity and variety of music you hear during the gameplay sections. My goal is make the music flow in and out of the experience, taking center stage at times or pulling back into the shadows as needed.

GT: They are all sold out, currently, but you’ve released all of your recent works electronically, but also on vinyl. What was the decision behind a physical release, and are you a vinyl junkie?

As a composer, printing records is a pretty dreamy experience. It’s been cool to see a surge in video game and film vinyl recently. They are works of art and it’s always fun to put on a record and experience the whole album the way the artist intended rather than a randomized playlist. It feels much more intimate and curated I guess. At first I wasn’t sure how people would react, but the response has been great for every vinyl I’ve produced (up to 4 now). I never thought people would want my signature on a piece of merch but I’ve been pleasantly surprised. I grew up making electronic music and hip hop beats, I used to DJ and scratch back when it was real records on two Technics. I had hundreds of records but after my car was broken into after a show I lost a lot of them and never really recovered. Now I have a turntable station in my house with some really nice orchestral recordings I enjoy a lot and then a bunch of game vinyls. I still love the experience of it.

GT: What’s next for you? Are you planning a breakout into movies? TV shows?

Finishing up DISINTEGRATION is at the moment is my primary gig – I’m really excited for people to hear what I’ve been working on with V1 Interactive. It’s a really unique take on the shooter with a great story and cast of characters. That team is full of superstars and just all around really nice and cool people to work with. I’ve got several unannounced things that I can’t wait to share at some point down the road also. I would love to work more in film and TV but I’ve been too busy to put the deserved energy into pursuing opportunities. Video games are my first love and I think I’ll always be scoring them, but working on a film, TV show or documentary that really moves me would be a thrill. If the right project comes along, I’m all in.

GT: Where can fans listen to and buy your music?