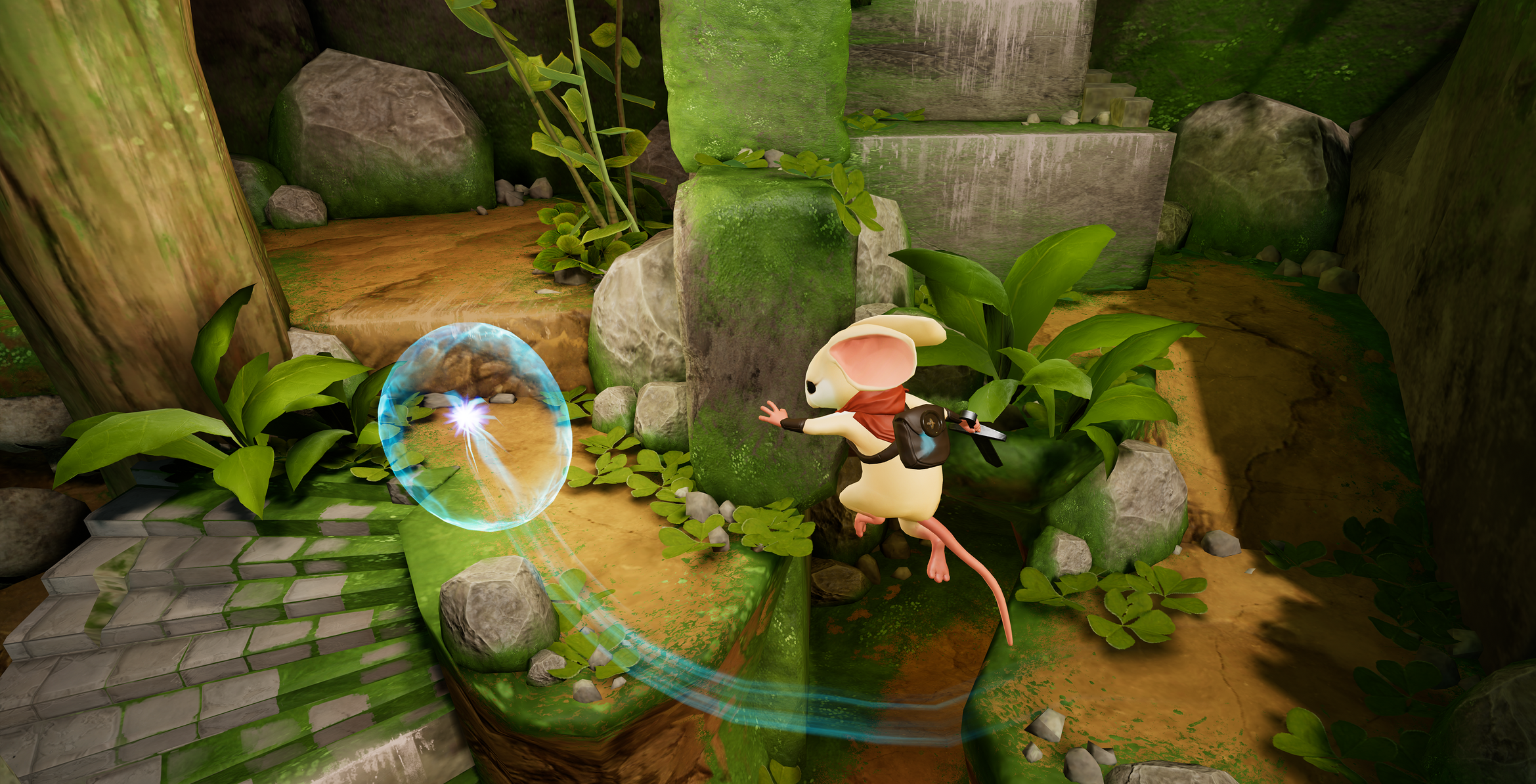 It was only a few short months ago that we fell in love with a mouse named Quill, the signing protagonist of the then PSVR exclusive title called Moss. We were delighted to see Moss make the leap to PC, a move which makes it playable on both the Vive and the Oculus, and added updated graphics, the ability to play using two hands, and some additional new features, such as the ability to feel Quill’s heartbeat whenever you pet her. I took a break from the hustle and bustle of the E3 floor to try out Moss on the Oculus before sitting down with Chris Alderson, co-founder and art director at Polyarc, to learn more about Moss’ PC release, Quill’s sign language, and what the future holds for this brave little mouse.

My first question is the one that everyone wants to know: what’s next for Quill? The first book is a complete story in and of itself, but the game alludes to much more.

Moss, the first book, is a complete tale. It tells of Quill setting forth on her adventure, and becoming the mouse that she is supposed to be. But we do have a larger story that we’re telling, and we do allude to further adventures. As far as what kind of content that could be? Probably following up, hopefully, if we’re fortunate enough to do so, probably another complete book.

Polyarc took a very unique approach to this game, in that Quill knows that the player is there. What was it like to concept that kind of storytelling?

We feel like VR can take you to really cool places, and it gives you that sense of immersion. If you take out you, yourself, being in that place, I feel like you’re not really taking advantage of the cool things that VR has to offer. So that was really interesting; it’s not just Quill’s story, it’s also yours, as the reader, as well. It was definitely a challenge to involve you within the story, too. We’re telling Quill’s tale, and you’re reading it, but you’re also present, kind of breaking that fourth wall. We do it within the game, but it’s also not really a fourth wall break because you’re present.

You turn the pages of the book, and we do a lot of storytelling through that. You’ll notice, while you’re in the library, we do callouts to you while the characters are talking, and that was definitely an interesting way to keep you involved, even though you’re reading the book. I think VR… there were a lot of things we had to prototype early on. We had to figure out what was important to us, and of those elements, we picked and chose what could go into a good VR game, and that’s kind of how we came up with the premise of Moss.

Why did you decide to have Quill communicate through sign language instead of voicing the character?

That’s a… we have to go back pretty far for this. We knew Quill wasn’t gonna speak to you–one of the important things for us was the bond with the character. We felt like if she was going to start talking to you, you wouldn’t feel that sense of nurturing or trying to care for her; we wanted her to feel more like if you have a pet dog or something at home, we wanted that feeling. The way she looks at you, and you look back, we want those feelings to emulate between you two.

That said, she does pantomime to you. If you’re not figuring out a puzzle quick enough, and if she’s figured it out, she will kind of like give you a hint on how to solve it. And we were looking at a lot of forms of communication to kind of help sell that idea, and how sign language came up was that our animator, Rick [Lico], was prototyping a bunch of different ways for her to talk to you. And in his free time, he did a test where Quill says, “Hi, my name’s Quill, pleased to meet you.” And he put it on Twitter for feedback, and it kind of blew up from there, it turned into something we kind of had to put in the game.

The response… it wasn’t just like, “Oh, this is neat,” it actually meant a lot to a lot of people, and we saw that feedback when we’d go to shows. People would come up to us and be like, “Is this the game with the sign language mouse?” And we’d be like, “Yes!” And they’d say, “Oh, I have a loved one that is deaf and signs,” and I mean, you could see the emotion come over them. We were like, “Ok, this is something that we… that we really have to do.”

We try to bring out… we want Moss to be a good outlet for people in the world, so any way we can capture that emotion, we’re all for that.

The world of Moss is huge, and filled with helmets, swords, and human artifacts, but it’s pretty abandoned. Are we going to get to learn more about the history of Quill’s world in future books?

I think we do mention “the giants that used to roam the land,” but we don’t say exactly what happened to them. We [Polyarc] know, we have a… as far as environmental storytelling goes, we know why things are in certain places. Not only do they look cool for Quill, because those are like–something that might be human-sized for us is monolithic for Quill.

As far as things that we place, everything has a purpose, and I think as someone playing the game, you kind of know when something is random, and everything that we’re doing is to make you feel like this world exists, and is real. So, if we’ve figured it out and we pour that storytelling into the environment, it’s just going to feel more real and lived in. The illusion, or the experience of being in VR, getting lost in this magical world, we don’t ever want that to break. We want everyone to feel comfortable, we want it to exist, that it has a place.

Can you tell us a little about the differences between the PC and PSVR versions?

The first thing you might notice is we have two controllers now. It’s not just us adding another hand, we actually balanced it throughout the game. We found that it was a little bit too powerful to be holding two enemies at the same time, and so if you grab one, and then try to grab another one, the first one will break free.

There’s cool things you can do like, not only can you heal Quill and grab an enemy at the same time, it also just… it’s just more relaxing and freeing. You don’t have to like… I feel like before sometimes you would remember that you were holding a gamepad or a game controller. This just feels more natural and I think you get lost in the world a lot better when you have the two controllers.

A couple other things we added: more language support. We added Mandarin, Cantonese, Italian, Spanish, and then also… we had Japanese subtitles before, now we have Japanese voice over. We added some more support for that, and we added save slots, so now you can play the game, and if someone comes over to your place and you want to show them, you don’t have to break your progress. We always want to give to our community; we look on the forums and see features that people suggest, or if there’s bugs, we’re constantly looking for that stuff.

Do you have any other powerful or touching stories from interacting with your community?

Yeah! I mean, we’ve had people write us and say we’ve been a huge impact on their life, and that’s always super rewarding to get those. Because you kind of forget. We make this game, we loved building it, but you kind of forget that when you put a product out there for anyone to buy, you’re actually influencing them in a way. So it’s cool to hear when we’re influencing people in a really positive way. We’ve had people that, on show floors, surrounded by people, that when they meet Quill they’re so overcome with joy that some people shed a tear, and that’s always really fun. And it really just reminds you what we’re doing is something that’s, hopefully, beyond just another video game; hopefully there’s something there that people experience that has a positive impact on their lives.