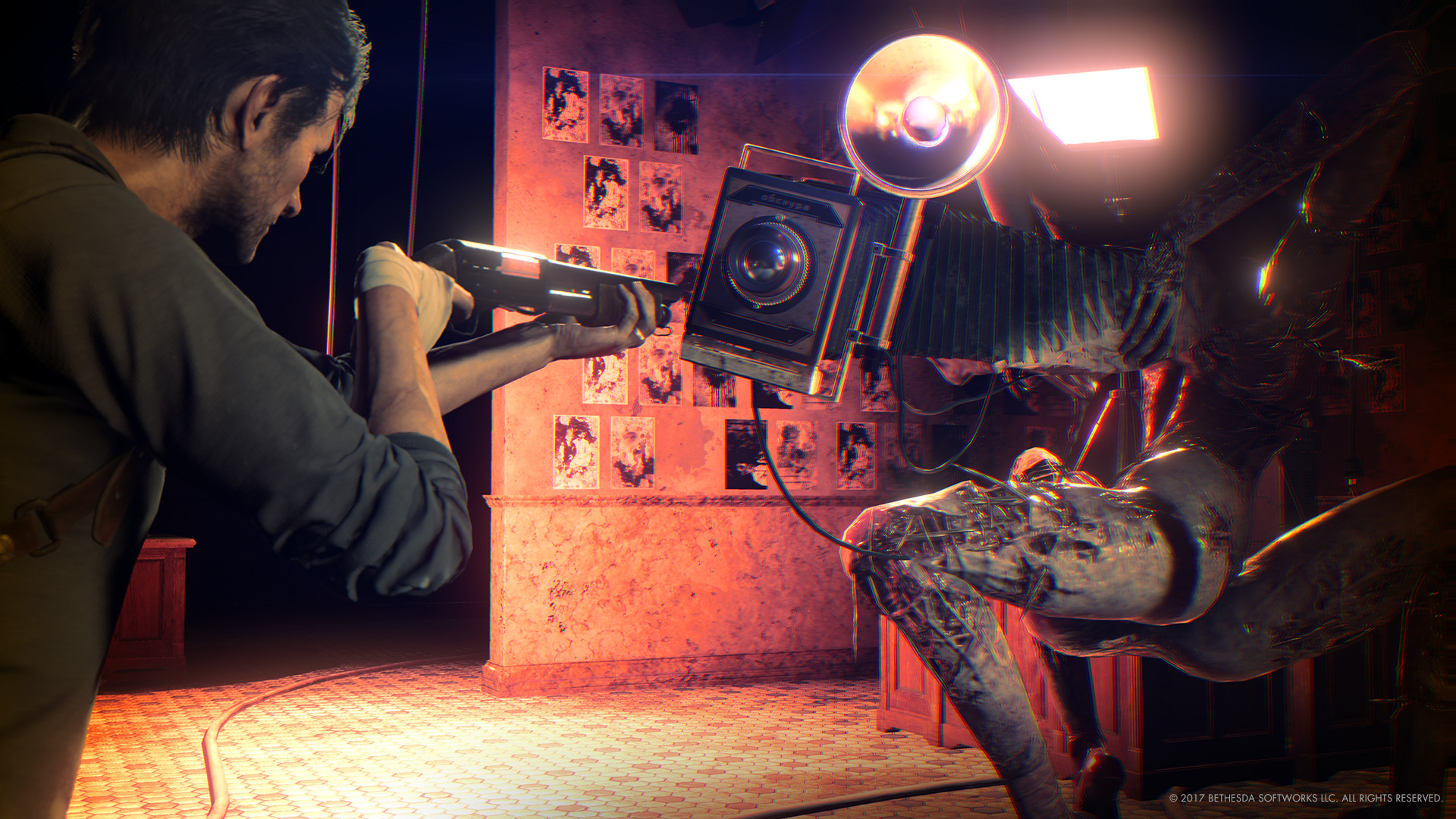 The Evil Within 2’s creators discuss their horror first mindset and balancing their game for maximum tension.

After getting a chance to play the second gameplay demo for Tango Gameworks’ The Evil Within 2, we had a chance to chat with two of the minds behind the game: game director John Johanas, as well as producer and series creator Shinji Mikami.

Gaming Trend(GT):  A lot of horror games these days don’t really have a lot of combat mechanics, but this game seems to embrace them.  Still, the demo today went between story driven narrative sections and very combat focused encounters.  How are you approaching that balance?

Shinji Mikami(SM): Well, rather than having a balance, the first thing I think of is to create an atmosphere which is horrific or fearful.  The next thing you do is go back through the map design and try to maintain that atmosphere, but you need to find places for creatures and other things to come up.  For the setting, that kind of work has to be done.

GT:  So with that in mind, the combat that we played today really did seem to be built around the aesthetic.  Things tied into the themes such as the camera traps or the Obscura enemy specifically.  How much do you think the setting should inform the style of challenge?  The motif of the camera actually tied into the combat more than I was expecting.

John Johans(JJ):  As far as the enemy design, when we first approached the concept of the enemy types we knew we were going to have this character Stefano.  He considers himself an artist and uses a camera to capture the moment of death.  Then the design of the monster you fight later in the demo, Obscura, came up.

We had that in the last game where the designs of the enemies reflect the environment, like the enemy with the safe, but we also always try to think how you implement that into the actual gameplay.  So for Obscura being able to stop time, how do we develop an encounter that uses that effectively.  Because of how unrealistic it is, it also makes you think about what is possible in the game.  The good thing about the IP is you don’t have to worry about realism.

GT:  It seems like there is a lot of opportunity to present really off kilter designs.

JJ: Yeah, you always try and do that, mess with people’s expectations of what a thing is going to do.  To most people they’re probably just satisfied to have the camera there, but then to be able to have it have this ability adds another layer.

GT:  And then in terms of the environment, between the two combat encounters, there is a lull where it is a lot more narrative driven.  It feels like you’re being led by the nose as the game’s intent is revealed to you.

JJ:  Yeah, maybe in the last game it was more about a nonstop oppressive tension and atmosphere.  This time we tried to do a better job balancing things out and having an ebb and flow.

GT: What was the biggest challenge moving from the last game to this one?

JJ:  The open levels, for sure.  Did you get a chance to play the last demo?

GT:  I didn’t but I did watch the play through on stream.

JJ:  We put a lot of fun stuff to do in that environment, but figuring out what those things should be was pretty challenging.

GT:  Do you have a favorite part of this game so far?

JJ:   I can’t talk about my favorite part yet, it’s something near the end of the game.  I do really like the section, it was one of the first ones we designed and when it came together it was a moment where we said, “Yeah this is what we’re going for.”

SM:  For me it’s that there are a lot of possible ways to play the game.  There are these open areas, and there are very different ways to play through them.  We tried to make sure the players had a lot of freedom.

GT:  Crafting on the fly is a cool addition, can you tell us a little more about the decision to put that in the game?

JJ:  That was probably one of the last things we pushed.  We really liked the idea of putting that decision onto the player.  It’s very useful, but because it uses more resources there’s more of a risk involved.  For a lot of people when they go back and think about what survival horror is all about, they’d say it’s about item management.  Even though that was an element of that in the first game, now we’re able to give you the leeway to manage that the way you want to.  It was a matter of letting the player play how they want to, as well as having to keep track of whether they have enough resources.

There’s this question of: do I need to craft this bullet now, or can I wait until I get to the next crafting bench?  Even if it isn’t doesn’t always play a role in what the player is doing, I think it sticks in the player’s mind when they pick up resources.

GT:  Did you find that it changed the way you populated the environment with resources?  Did you end up putting less actual ammo in environments?

JJ:  Yeah, it actually came out of the open areas.  What we found was that if you put ammo drops in those environments, some players would just explore everywhere and end up overflowing with ammo.  So it was really a question of how we break up the resources more effectively so that wouldn’t happen.  In terms of some environments, like bosses, we’ll typically put a bit more ammo there.  Although, that changes based on what difficulty you’re playing on.

The way you balance item locations and resource management might be the hardest thing to get right.  It’s something we worked on all the way up to the very end.  It’s tiresome, but when you get it right it works.  The player doesn’t feel like they don’t have enough of what they need, but they have just enough to get through.

SM:  We have these wide stages and you also have freedom to approach how you play.  I feel like we ended on something which is really balanced.

The Evil Within 2 will be released Friday, October 13th for Playstation 4, XBOX One, and PC.  For more information check out the game’s official site, or the Steam page.