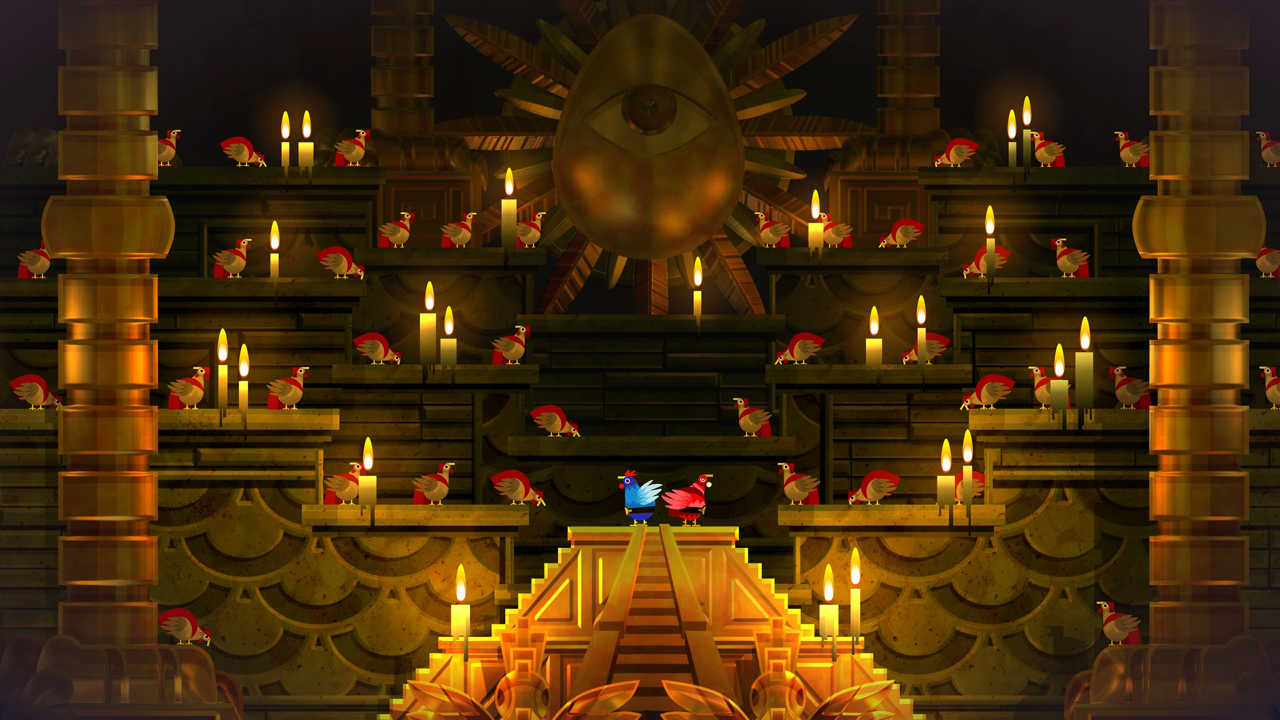 After the success of Guacamelee, it was only a matter of time before we returned to Pueblucho for another round. With the release of Guacamelee 2, we got the chance to ask Graham Smith, co-founder of Drinkbox Studios, about what to expect from the game and how the team did justice to its Mexican setting.

You can also read what we thought of the poultry-powered sequel here.

You’ve had other successful games, but Guacamelee was a breakaway hit. Were you surprised at all by how well the game did? Has that success changed the way you work as a studio?

I think the team knew that we had something special with the original Guacamelee before it was launched. Having shown demos of the game at various events (e.g. PAX, E3, GDC), we could see that people were really attracted to the bizarre humor as well as the brawling/platforming gameplay. The success of the original game gave us a nice financial cushion that allowed us to be more experimental with our follow up game, Severed. Other than that though, the success of Guacamelee didn’t really change the team or our process for making games in any substantial way.

I’ve read that your animator, Augusto, came up with Guacamelee’s Mexican-inspired aesthetic. Other than his experience, what research did you do to get your representation of Mexico right?

While some people on the team did do research into different aspects of Mexico to inspire our level designs (e.g. Cenotes for the Forest del Chivo, Aztec/Mayan cultures for the temples), we relied most heavily on Augusto to make the game feel culturally correct. There are tons of small details that non-Mexicans will completely miss, like the way the bottoms of the trees in Pueblucho are painted white (to protect from pests), or the way the hammock is hung in Juan’s house, or the chairs that are used in the town. Augusto spent a lot of time adding elements like this to the game and I think that Mexicans recognize and appreciate these.

What kind of response did you get from people on how you handled the setting? I’m particularly interested in what feedback you got from Mexican players.

After the original Guacamelee launched, there were a few instances of people asking, “Is this offensive?” But I don’t believe I saw any comments like this from anyone who lives in Mexico. In fact, the closest thing I remember reading was a discussion on a Mexican gaming website where Mexicans were saying that they wished Mexican game studios would try to make more games based in Mexico. Also, when showing Guacamelee! 2 at PSX and PAX, we’ve been approached by Mexicans many times to thank us for making a game that took Mexican culture seriously.

What inspired you to make a sequel to Guacamelee? When you finished the original game, did you know you wanted to return to that setting some day, or did that decision come later?

We really enjoyed working on the original Guacamelee, and at the end of that project we all kind of knew that we’d come back to the property one day. We were a bit tired of working on the game at that time though, and knew that we needed some space away from the Guacamelee universe to recharge our creative batteries. That’s one of the reasons we chose to work on Severed as our follow-up project, as it is so different from Guacamelee, and we needed to work on something completely different for a while.

How did you balance the new 4-player mode so the game doesn’t become too hard/easy depending on how many players you have?

We scale up/down the enemy health and damage based on the number of players that are currently in the game. It’s a bit easier to deal with crowds of enemies when you have multiple players, but enemies also take longer to kill, and it’s also easier to die during combat.

What are some of the biggest changes players will notice in the sequel?

On the visual side, players should notice that we’ve significantly improved our rendering engine. The addition of normal mapped textures with dynamic lighting has added a lot more realism. We’ve also added a ton of new environmental effects, such as more realistic water and grass, which we believe makes the world feel more immersive.

On the gameplay side, we’ve added a couple of new moves for Juan, but have focused a lot more on extending the chicken’s moveset, as well as adding a number of new environmental mechanics for players to discover.

We’ve also added skill trees for players to purchase upgrades, a whole new set of enemies and bosses, a ton of new music, and a new game world that’s significantly larger than the original game world.

Chicken powers play a huge role in the new game. What made you decide to focus so much on what was a relatively small part of the original?

The chicken form has always been a favorite of players of the original Guacamelee. I remember the very first time we showed the game publicly people found the chicken form hilarious, and would even try to complete the demo as a chicken (which was possible but not easy). There was also a lot more room for an extended move set on the chicken than there was for the human characters, so we chose this as a focus in Guacamelee 2.

Going back and trying to play the original game now, the old chicken ability really feels limited once you’ve had a chance to experience the new chicken form with it’s new abilities.

And finally, can you share anything about what to expect from Drinkbox Studios in the future?

We don’t have much to announce on this front just yet! We’ve been pretty focused on trying to raise awareness of the sequel, and are only just starting internal discussions about what we should work on next.