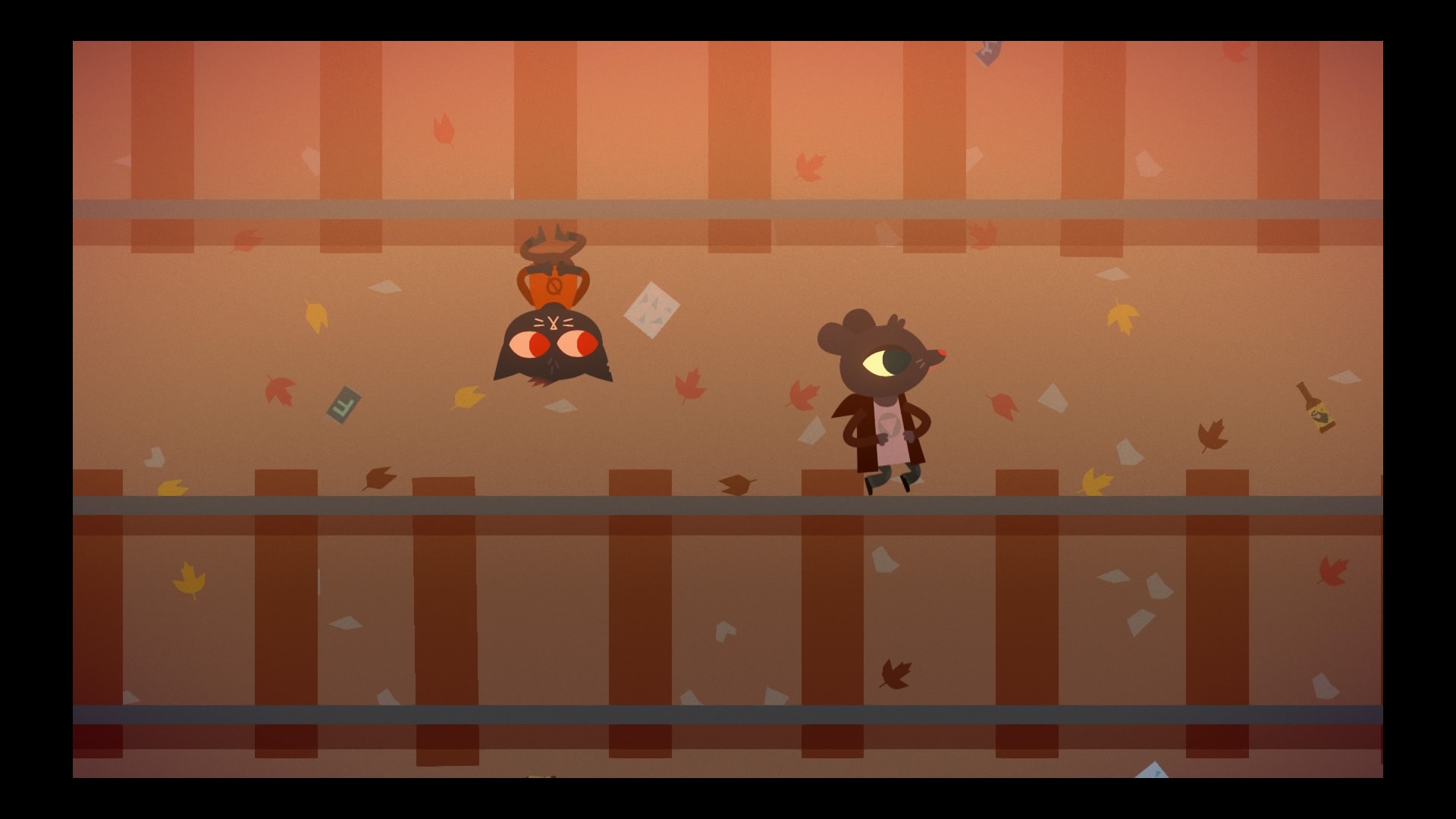 Earlier this year, Infinite Fall released Night in the Woods, a charming and sometimes too-real adventure game that was well-received by a wide array of outlets. This indie game became nominated for The Game Award’s Best Indie Game and Games for Impact as well as made its way onto our 2017 Holiday Guide. Recently, I’ve gotten in touch with Night in the Woods programmer Alec Holowka about the next update to the game, Night in the Woods: Weird Autumn Edition.

First of all, I’d like to congratulate you on your nominations for “Best Indie Game” and “Games for Impact” This must be a huge honor for you, how do you feel about the nomination?

The Game Awards are incredibly tacky, they were sponsored by McDonalds and the afterparty was just a big McDonalds in a tent. It smelled terrible in there. It was hilarious that they kept claiming that they were classier than the Oscars and yet were shamelessly promoting sales and products with piles of commercials and drenching us in burger stench.

Speaking of awards, I’m very honoured by our wins in the Unity awards this year.

The Unity Awards are a yearly recognition of all of the excellent projects made in Unity and can be viewed on the Unity website. Night in the Woods won the award for Best 2D Visuals as well as the Golden Cube award, the highest honor available at the Unity Awards.

Night in the Woods coming to mobile devices was a sudden surprise. What made you decide to embrace smartphones (except for the clearly superior Nokia N-Gage) for Possum Springs?

I’m excited about the iOS version because it’ll mean potentially more non-gamers will be able to discover the game. I think it’ll make for a slightly more intimate experience playing on your phone instead of having to hook something up to a TV etc.

With moving towards a touchscreen-only interface, are you having any difficulties bringing the game over to mobile devices?

Yeah, thankfully our buddy Jon Manning is handling the iOS port. He’s doing all kinds of crazy custom optimizations to our piles and piles of sprite animation frames to even get the game to run on devices where we only have 700mb of RAM available.

Let’s move on to Night in the Woods: Weird Autumn Edition. First of all, was there any particular reason you went with the name of the second band song? Besides December 13th technically being a part of Autumn, of course!

The game takes place in autumn and it’s pretty weird. This update adds some new weirdness.

Speaking of band songs, it’s teased in the trailer that Mae has a dreamy band sequence. Beyond that scene, can we expect anymore band sessions with the gang?

What’s new to WA is that Mae can play bass in her room. So the player can revisit the band songs they’ve played and there are also 3 new tracks that can be unlocked. One of those new unlockable tracks is probably one of my favs in the entire game.

One of the cut scenes from Night in the Woods was a very in-depth hangout session with Germ and we still know little about him. Will we get to learn more about our favorite little Germ Warfare?

There’s some more Germ in there. We’ve updated and modified his previously cut scene somewhat.

We can’t wait to get into more mischief, but we’re not sure how different things will be this time around! How did you go about developing Weird Autumn? Was it adding on to existing content, or can we expect some story elements to be moved around?

The storyline is the same overall but there are more details, some new people around town, some new minigames, new songs, etc. I also went through and did a massive polishing pass with a couple hardcore fans/testers. We’ve refined a bunch of the code, redid a lot of the collision to improve the layering of the characters, fixed typos and minor inconsistencies etc. There was a ton of small tweaks made over a few months. Hopefully everything will feel a little tighter overall.

The trailer teased new dream segments for Mae. With how day-night cycles work, can we expect to see entire days added to the life of Mae Borowski?

No entire new days have been added, instead we’ve gone in and added details. I think the biggest piece is a new optional “quest” that can be discovered in the tunnels.

The addition of Longest Night and Lost Constellation really help fans get a complete sense of the world your team has created. When bringing them to the full game, are there any challenges? How will they differ from their supplemental counterparts?

Lost Constellation had to be “ported” back to the current version of the codebase, as it was made ages ago and many things had changed since then. The biggest piece was that back then I was doing sound design and I was using Unity’s built-in sound engine. We switched to FMOD and hired sound designer Em Halberstadt (who is amazing and made over 5000 sounds for the game) partway through development. Her work is phenomenal, so we asked her to redo all the sound design for LC. Reimplementing all of that and fixing various bugs took some time.

One of the highlights of Night in the Woods is of course hanging out with several of the characters one-on-one. Do you have a personal favorite hangout?

I like how Gregg’s robot-building storyline turned out. Originally that was going to be about restoring an old arcade machine, but it kinda clashed with the Demontower minigame as it was another “game within the game” thing.

“Coming soon to all major consoles,” is an exciting promise, if it’s hinting what we think it’s hinting at. Would all console versions be released on December 13th, or would some come later than others? If so, how much later can we expect them?

At this point some things are still up in the air. Once we know for sure, we’ll do an announcement.

Thank you very much for your time! Is there anything else you’d like to share that we haven’t covered yet?

Just wanted to say thanks to everyone who played the game! It’s a weird one and I’m pretty happy with how it turned out.