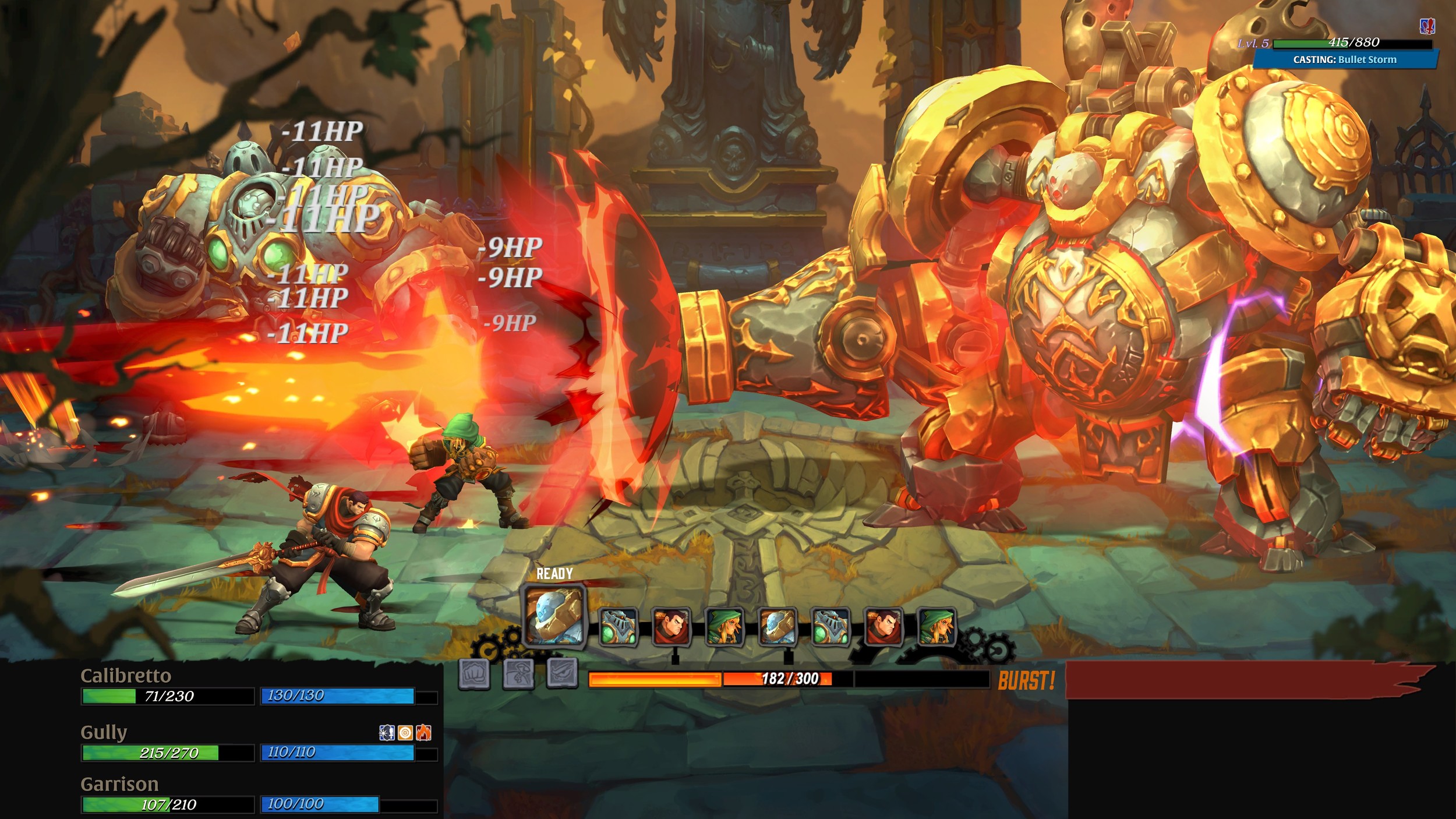 We’ve been covering Battle Chasers: Nightwar since we got a personal tour of the demo at E3 by Joe Mad, CEO and Creative Director of Airship Syndicate. Battle Chasers is making the jump from a 90’s comic sensation to an indie game, described as a love letter to the JRPG genre, and arrives on Xbox One, PlayStation 4, and PC on October 3rd, with a later release on the Nintendo Switch. We’ve now poured 30+ hours into Battle Chasers: Nightwar, and were excited for the opportunity to chat with Joe Mad and learn more about the game, its soundtrack, and the future of the studio.

It’s been 16 years since your last issue of the Battle Chasers comic, which only spanned 9 issues. Are you concerned that the property might not resonate as well it did in 1998-2001?

It was a huge fear of mine, actually. To the point that I was resistant at first to the idea of making Nightwar a Battle Chasers game vs. developing a new IP from scratch. Our amazing support from Kickstarter backers, and positive word of mouth from people that have tried the beta helped me get over it though. Fingers crossed!!!

You’ve said that you’re planning to continue the Battle Chasers comics, will the new ones pick up right where issue 9 dropped off, or are you planning to approach things differently after so much time?

I think so, yes. Working in games has helped me structure my process a bit. A little more planning. I’m more production minded. Back in the day I just shot from the hip and rolled with whatever I felt like drawing that week, that month. I had only a vague idea of where the story was going to go, but I figured I could take my sweet time getting there. This 3 issue arc will be a lot more focused, even self-contained.

What has changed the most from the comic to the game?

The heroes from the books are all playable in Nightwar, and some have had small updates made to their overall design. Partially to make them animation friendly, make sure they read well on screen when the camera is zoomed out, etc. The most notable changes were made for gameplay reasons. For instance, Bretto has healing abilities which he didn’t have in the comics, Garrison uses different swords, Gully gets upgrades to her legendary gauntlets. It doesn’t make a lot of sense from a lore standpoint, but was necessary to make the game fun.

It seems like Battle Chasers and Darksiders have a lot in common. Is this one property influencing another, or just a reflection of your interests?

The latter I think. I have certain esthetics I lean toward, certain archetypes and themes. There’s a range though—I think BC is more light hearted ‘Adventure Fantasy’ whereas Darksiders is a little more ‘Fantasy Horror’. But I do think the two meet somewhere in the middle.

Speaking of: Battle Chasers plays very differently from Darksiders. Why did you decide to go turn-based?

We are all huge fans of the classic, turn based RPGs at the studio. As a group, we sort of lament how there really aren’t that many of these games being made anymore, especially in the states. And really, comic itself was heavily influenced by games like Chrono Trigger and Final Fantasy, so it seemed like a perfect fit for us.

Were there any memorable challenges you faced in taking on the RPG genre?

As a genre, no, I don’t think so. I think we’d welcome the chance to do it again. The biggest challenge for us I think was scope—and trying to make something that felt like a AAA effort with a very small team and limited resources. We learned some valuable lessons though, and I’m sure we’ll learn a few more once players get their hands on the game and the feedback starts pouring in.

Nightwar features cut scenes which are animated comic panels instead of the kinds of animated cut scenes we’re used to seeing in video games. Was this a decision made to reduce cost, or was it done as a way to honor Battle Chasers comic book roots?

To be honest, it was both. There was a synergy there, and as a small team, if you can cut costs anywhere and not sacrifice quality, or have it feel ‘cheap’, it’s definitely the way to go. We saved about a bazillion dollars by going that route, and because the series has its comic roots, it feels very intentional. It also gives the game more of a distinct style and energy, so in the end we wouldn’t change a thing, even if we had the budget to go bigger. I just wish we had way more of it!

Why did you choose to tell this story via the game medium as opposed to sticking to comics?

Nightwar was really more about making a game than telling a story. It would still make a fun comic, but this time out, we wanted to experience what it would be like actually running around in the world with these characters, and directing them in battle. That, and games are a fulltime job for me these days.

What prompted you to transition from comics to games?

I’d always been an avid gamer, even before I ever picked up a comic book. So, as much as I loved comics, and despite having made a successful career working in that field, I made the jump when the opportunity presented itself. I can’t say I prefer one to the other, that sort of changes depending on the day. I’d still love to get back to doing comics someday on a more regular basis. But it’ll be hard at this point, there are too many games we still want to make!

Has designing for video games affected your drawing style?

Yes, I think so. I appreciate simpler designs. When I was growing up, I idolized artists that covered pages in detail, but now I prefer large blocky shapes, solid form. Movement. Artists that can convey a lot of energy and information in fewer lines. I think my style is moving in that direction as well. It has more of an animation quality, I’d say.

The soundtrack for Nightwar is amazing. What were the musical influences of your team, and where there any specific tones they were trying to set with the scores?

Thank you for saying so! We all love game OSTs at the studio, and listen to them quite often while we’re working, so we knew ours had to be awesome. I discovered Clark Powell’s work when I came across it on Bandcamp, and it just sounded so perfect for an RPG. Lots of classical elements like piano and cello, but with quirky modern beats and electronica vibes. It also conveyed a lot of emotion, or ‘heart’ as we call it. It’s catchy and memorable. He contributed the majority of the soundtrack. We also had the privilege of working with Jesper Kyd at Vigil Games, back on Darksiders 2, and that’s still one of my personal favorite game soundtracks in ages. It was amazing to get him involved on Nightwar as well. I wish we could get a dozen more tracks from each of them!

On a more personal note, what artists inspire you these days?

I spend a little time every morning browsing ArtStation, and the sheer amount of awesome talent on there is staggering. It would be really hard to narrow down! I’m one of those people that’s inspired by almost everything I see that makes an impression, and I’m sad to say that I know artists more by their work than by their name. Many of them don’t even live in the US! Arthur Adams still blows me away. Arnold Tsang killed it on the designs for Overwatch—every character is a gem. Cory Loftis ( over at Pixar now ), Nicholas Kole and Johannes Helgeson are guys I look at on the regular. Baldi Konijn (who just joined our at Airship), Grace Liu and Jesse Carpenter, who did so much of the art on Battle Chasers. Those are the artists that immediately spring to mind.

What games inspire you?

I’m really into hand painted games lately. Anything that evokes strong atmosphere or emotion. Games like Ori and the Blind Forest make me cry.

What’s the next big thing on the horizon for Joe Mad and Airship Syndicate?

Believe it or not, we are already in pre-production on our next project. I wish I could talk about it, but of course, I can’t. If Battle Chasers kicks ass, I think it would be crazy not to do more with it down the road, and we also have some concepts and pitches we’ve been developing that are momentarily shelved, but that we’re dying to get back to. So—there’s a LOT for us on the horizon. Stay tuned!