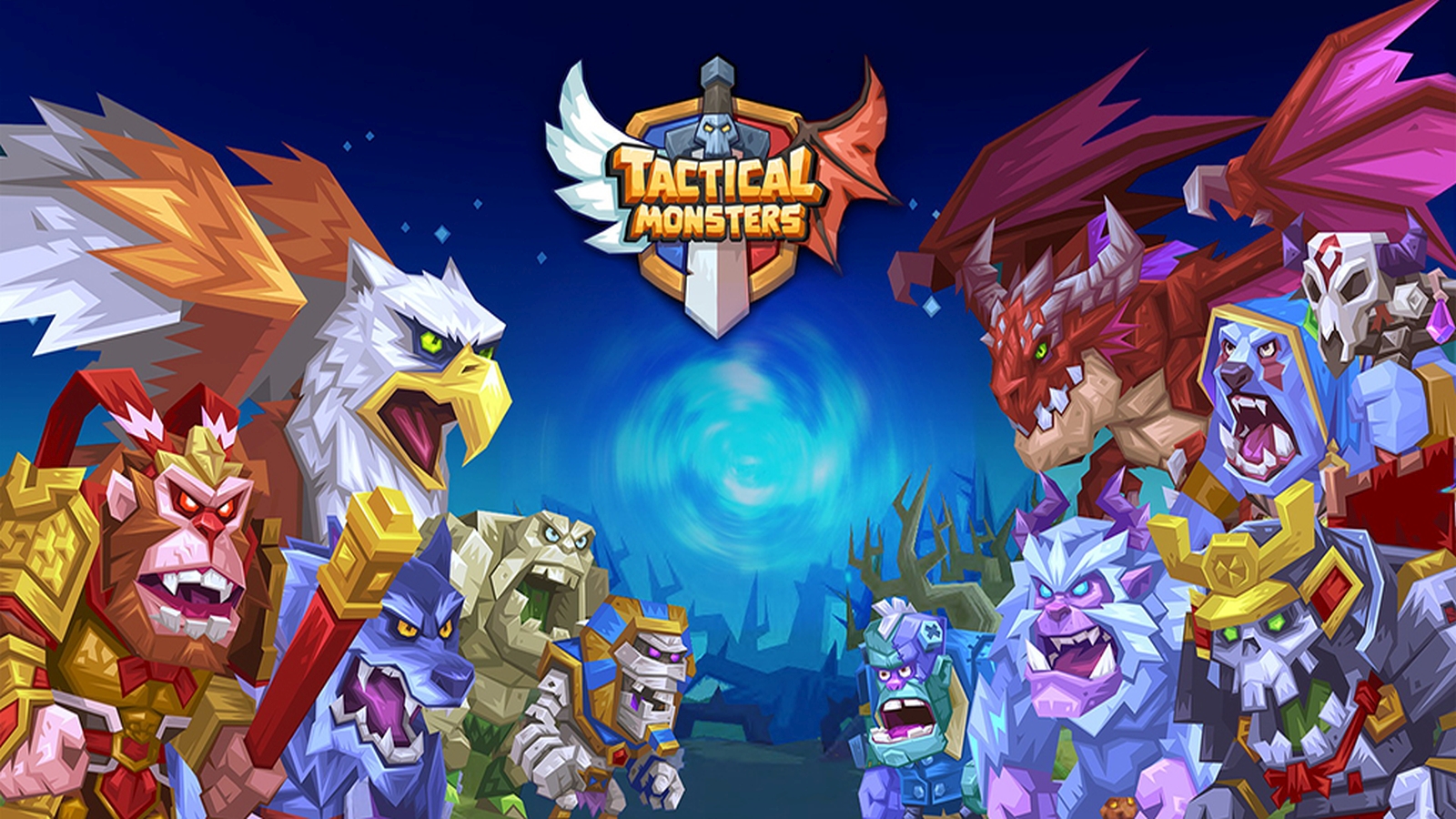 What is your name and position with Camex?
I’m Michael Tseng, in my role as COO for Camex I oversee everything from game development, live operation, and studio operations to marketing and biz dev.

Can you tell us about Camex Games, what types of games are you known for?
We are an indie developer with a focus on tactical RPGs. We also publish our own games. We grew up playing tactical RPGs, and have always enjoyed making them. Our studio was founded in 2015, though many of our core team have been making games for over a decade. Since our founding, we’ve launched two games – Heroes Tactics (a best-seller on mobile) and now Tactical Monsters Rumble Arena (a cross platform game on mobile, PC, web, and console).

Your last game was Heroes Tactics, how successful was that for you?
Heroes Tactics was globally featured multiple times by Google Play, in the Apple App Store, and on Facebook, Kongregate, and VK — so we take that as a “positive reception”. Another thing we are proud of is that Heroes Tactics was featured on Google I/O as a case study alongside other top worldwide publishers. We’re very happy with Heroes Tactics’ success.

Is Tactical Monsters Rumble Arena a sequel to Heroes Tactics, or is it more of a “spiritual successor”? Are there any gameplay elements that are present in both games?
Tactical Monsters is a completely different game when compared to Heroes Tactics. The only similar concept is the tactics-based gameplay, but otherwise, it’s all new – new characters, new gameplay, new features and more.

Also, given that this is a strategy game, we learned from Heroes Tactics that we should allow the players to focus more on the actual battles and less on the RPG hero growth system. Heroes Tactics had a complicated hero advancement system which didn’t really allow the players, based on their personal preference, to clearly see which characters they would like to train long-term. So we implemented a very simple, straightforward approach that allows the player to “not think too hard” when growing characters.

What was the inspiration for Tactical Monsters?
Our studio is made of people who play tactical games. We all play Heroes of Might and Magic, Fire Emblem, etc. So, we just wanted to make a new type of gameplay based on our passion for tactics games for the current generation of gamers.

From a business perspective, we needed to make something that not only tactical players will enjoy, but the market will also appreciate. One thing we know for sure is that the market is always evolving and players are always looking for something new, something fresh. And we understand that the PC and console markets have always been midcore/hardcore, while the mobile market is moving in the midcore/hardcore direction. So we are definitely in the market sweet spot with Tactical Monsters. Also, what’s “hot” in the market right now are real-time battles. Players want to engage in battles (or in our game, we call these RUMBLES) that are live and exciting. Another thing players want are global battles; a player from the US wants to be able to battle not just with friends, but with someone across the world, for example a player from China. Players don’t just want to win in their region or country anymore, their ultimate goal is to be number one in the world. This is especially true given that a lot more gamers want to be an eSports champion.

Where did you come up with the ideas for the characters and their art designs?
Our game is not just a tactical game, it’s also a RPG. Overall, it’s a TRPG (Tactical Role-Playing Game) in industry-speak. We designed the game to be fun tactically not just through gameplay, but also through character attributes and skills design. We also wanted to use characters that look distinct. And this would mean that the character art needs to feel unique in personality and the art style needs to be very distinguished. That way, players will not just collect the characters because of their stats and skillset, but also because they like the visual designs and are actually emotionally attached to the characters.

What types of characters can players expect to come across in the game? Any that you feel are especially unique or fun to play?
Our game includes monsters from all “time and space”. Basically monsters come to the “Rumble Arena” from all cultures, from all timelines, from earth, from space, etc. There’s a ton of variety in the creatures available – from Franky the Frankenstein, to fantasy monsters like Medusa and Griffin, to culturally established creatures like WuKong and the Mummy, to monsters you’ve never seen before such as Bigfoot and Nobu the ghost samurai. Each has unique abilities such as magic skills, physical skills, ranged skills or even world-ending skills like the nuclear warhead from Dr. Walter’s Mecha Machine.

My personal favorite is WuKong, because he can summon a “shadow” Wukong, which is basically a copy of himself. He can also travel longer distances relative to other characters. However, like every character in the game, there are advantages and disadvantages to using him. Wukong has less HP so he’s easier to kill, and thus players need to use him smartly and very tactically. In the game, there is no character that “beats all characters” It’s more about using the characters in combination with other characters, timing and strategy in order to win each battle.

Are there any specific features you think make the game really stand out in the tactical space?
Our focus on real-time PvP modes makes the game feel like playing speed-chess on a pro level. The game focuses on fast-action and deep, yet brief, turn-based matches with players around the world. Each battle is a quick but thrilling and intense 3-5 minutes. This makes the game not only fun to play, but exciting to watch. Very few, if any, turn-based tactics games offer this sort of PvP play.

Along with PvP, we offer various single-player, or PvE, modes. We designed the game to ensure players will have earned and unlocked a variety of monsters before jumping into PvP. We have an extensive single player campaign mode (Adventure Mode) where the player can take 5 characters to battle. There is also the Guerilla Warfare mode, where the player battles 10 bosses continuously with their entire roster of monsters, we also call this the endurance mode. There is also the Proving Grounds and also the Rumble Tower mode, where players are striped of their ranks and compete on a pure tactics and smartness level.

All your maps are hex grid based, can you tell us why that’s important?
In the tactical games, there are multiple map formats, but through trial-and-error, we found that hex-grid style maps work best for tactical play. It lets you attack from multiple angles, and offer more opportunities to surround an enemy with your units.

Do you have plans to take the game to other platforms?
We created Tactical Monsters with the motto “Play anytime, play anywhere” –This means that our PvP gameplay will be cross-device, and currently Early Access players on Steam and Apple Testflight are already battling live players from Google Play. This also means that in the future, each player’s gameplay may be synchronized across multiple platforms; so a player can play any time through their day; from their phone while on the subway in the morning, on Steam when they get to the office, and on Xbox when they get home. The technical infrastructure that supports this kind environment needs to be designed and built from day one and we’ve made sure that system supports this.

As for specific additional platforms, we’re plan to bring Tactical Monsters to consoles and the web in 2018, and offer this cross-play support then.

Have you had any notable achievements?
Even though Tactical Monsters just launched on PC and Google Play, it took us a long time to get the game from a development-complete state to a launch-ready state. We really need to thank Google Play since they allowed us to be a part of their Early Access program. Through this program, we used the activity and feedback of 200,000 players to modify, tweak and even completely throw out some parts of the game. For example, the stamina system, that you now don’t see in the game, used to be a part of the game’s core design loop. But through Google Play Early Access feedback, we removed it.

With the game launched on Google Play and on Nov 13th on steam, the game now has over 700K players battling each other worldwide. Players have given us a rating of 4.7 out of 5.0 on Google Play. We are also getting positive reviews on Steam. Overall, we are just stoked about the worldwide player reviews.

Are there any plans for new content or features to be added post-launch? What can fans look forward to in the future once they’ve become active players?

There will be more tactical modes to come, especially PvP modes. And definitely more monsters will be “born”. We have special monsters in store for the holidays, you might even be able to guess who it is, but just a hint… it’s not the fat one with the the white beard.

For you personally, what would be your dream game to design?
Another tactical game of course. We’ve always wanted make to a new “Final Fantasy Tactics” game. For Tactical Monsters, we are exploring partnerships to find what famous “monsters” from well-known IPs would be a good fit.