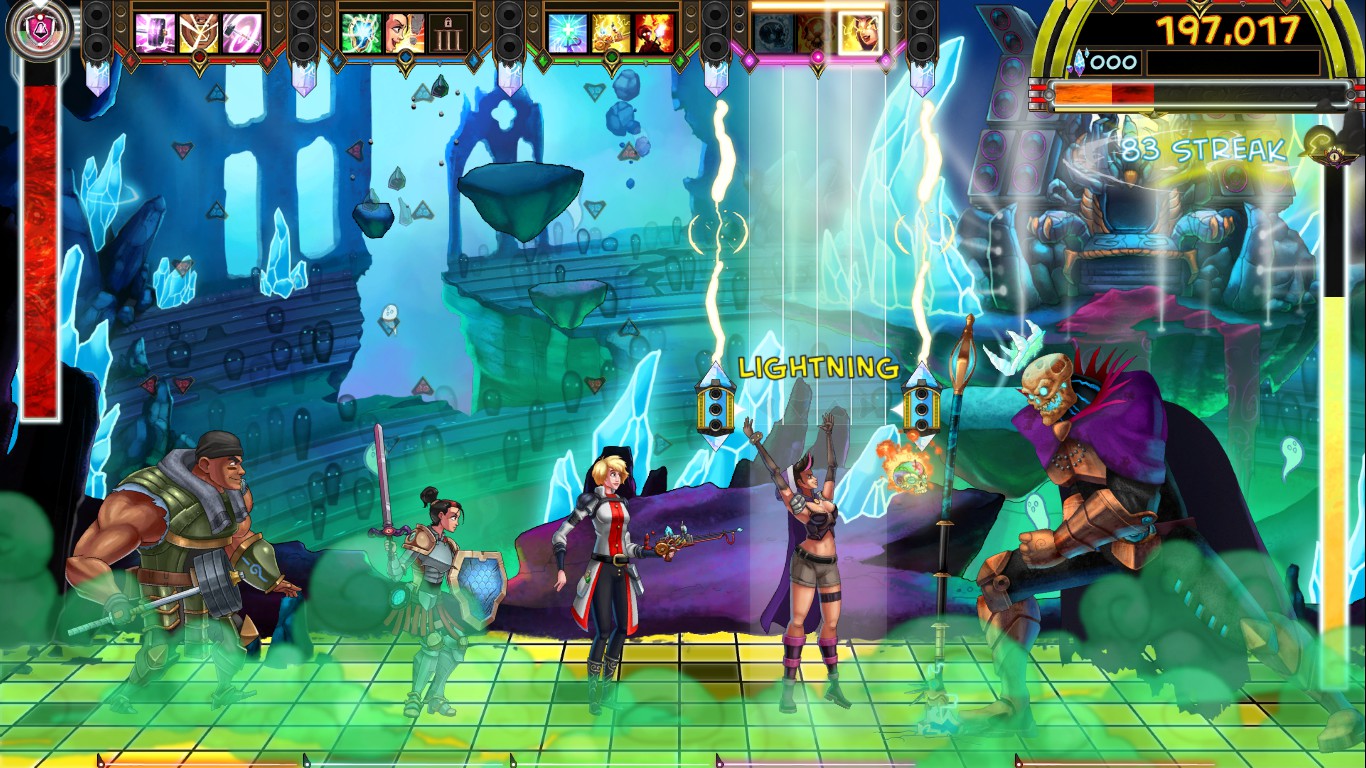 Puuba’s The Metronomicon proves that rhythm games and RPGs go together as well as peanut butter and jelly; the RPG/music hybrid scored high marks in our review as our reviewer called it, “pure, unfiltered goodness.” We spoke with Danny Garfield, developer of The Metronomicon, to talk about the game as well as how the music genre is constantly redefining itself.

Gaming Trend: So ever since I did a preview of The Metronomicon, I can’t stop recommending it to people I know. How would you describe the game in ten or less words?
Danny Garfield: Thank you so much! Jeez, ten words, eh…? What about… “What if dance fighters had chiptune sword magic? That thing!”

GT: So you guys recently went to Gamescom and PAX West. How was the reception for the title at those conventions?

DG: Oh man, our past conventions have actually been really great. Player reception seems to be really positive, which is so nice to see. At some of our shows, we’ve run contests to see who could get the top scores on songs, and we’ve seen people come back literally dozens of times to replay. At a convention, where time is so precious, and there’re so many good games to play… that’s a sort of positive response you can’t fake. Super nice to see.

Also! At Gamescom, we got nominated for the Indie Prize! We’re a bunch of little people in assorted basements! That’s amazing!

Fun for mages, warriors, and fighters of all types!

GT: Part of the reason I adore this game is the fact that it mashes up the best of RPG tropes and rhythm gameplay. What were your inspirations for the gameplay mechanics and story?

DG: Mechanically, the game was actually birthed from two different design ideas I was playing with. First, I wanted to find a way to distill an RPG into the most streamlined button mechanics I could think of. I wanted to preserve all that strategy, and party building, and combat… but sort of call it an… “infinite runner RPG”? That’s actually what I called it in my notes.

Separately, I was experimenting with ways to bring more strategy or player subjectivity into the rhythm genre. It sorta occurred to me that those are probably the same idea! Story-wise… I find it hard to dig into anything too overly serious. So, given the opportunity to smash together club music and rock and… giant swords, the mechanics themselves begged for a ridiculous adventure.

GT: Let’s talk music. There are 50 tracks in The Metronomicon, with some exclusive songs debuting in it. How’d you decide on what cuts would be in the game?

DG: This was really hard, actually! At first, our plan was to do basically all of the music ourselves, to have J-Punch and perhaps another friend of ours do the whole thing.

Really early on, though, we realized… we’re making a music game because we love music. We all have favorite bands, right? So, we figured… why not. Let’s cold-call and ask a bunch of people we love! Beyond that, the folks on Reddit contributed a TON of music for us to go through, an embarrassment of riches.

From there, it was really just voting amongst three of us. [Fellow staff] Dave, David, and myself, mostly. We’d all jam our notes together, veto each other, fight about it, and all decided to only include a track if at least one person really loved it. With so much music, it’s hard not to be lazy and settle with just “really good”. So, I’m happy we had the stamina to keep challenging each other.

GT: I love how this game makes me want to listen to songs I normally wouldn’t (“Fighting with the Melody” and the J-Punch songs come to mind), and there were some tracks I wouldn’t imagine playing in a music game actually working in practice. How important do you think song choice is in making gameplay fun and entertaining?

DG: This was actually super important to us. I wanted all the songs to capture sort of a “danceable, combat-appropriate, high energy” feel. But, at the same time, I didn’t want the soundtrack to become too homogenous. There was a lot of effort to stretch just a little outside of my normal genre comforts and include some tracks I might not, as long as someone else truly loved it.

The most important things were rhythmic complexity and energy. We needed enough action to be able to fill up four concurrent tracks of choreography, all with unique contents. So [for] some songs, even if we loved them, didn’t work if they were too rhythmically simple. Had to cut some faves there.

Screenshot from “Fighting With the Melody.” It is a glorious boss battle.

GT: If there was an artist or band that you would want to see perform right now, who would it be?

DG: This is gonna sound like a canned PR answer, but Mindless Self Indulgence (the band with the singer who wrote Fighting with the Melody) really is one of my favorite bands. I’ve seen them SO many times.

That being said, though… man, am I getting old or something? Of late, most of my shows are here in LA at the Hollywood Bowl or The Greek. I go see shows pretty often, but those seem like grown up venues to me, right?
Outside our game? More Postal Service concerts! I saw them at the ten-year reunion, and that was awesome!

GT: Do you think that rhythm games can have a future blending into other genres? I’d love to see a rhythm FPS to be honest.
DG: Ha! I am so bunk at FPS games. I feel like it’s a collision course with wackiness that everyone understands but me. Let’s see… Can we do… Rhythm 3D Chess? Or a Rhythm Staring Competition?

That being said, this very question is why I love and do indie games. It’s such a free space to experiment with such crazy nonsense. What triple A title is going to support something so objectively silly? Haha.

My reaction to previewing the game.

GT: Finally, any last words or things you’d like to say about the game, the development team, or music in general?

DG: “Thanks to everyone”? This project has been amazing so far. The artists have killed it, and our producer pushed us to get music we’d never have gotten otherwise. Everyone seems to be constantly pushing each other for new ways to do things, and to not settle. I can honestly say I need that last bit sometimes. This is, for me, probably the coolest thing I’ve worked on.
Yay team!

The Metronomicon will be available on Steam on September 29.